Following on from Part 2 last week, and if you missed the first two…Link is Here to Part 1 and the Link to Part 2

I continued my research by trying to tie up any loose ends with ‘Charlie & Kitty’ on the family tree. I do like to complete people’s lives by putting in their Birth, Marriage & Death dates if I can. So I had all of Katherine’s siblings birth dates & some of their marriages, so now death dates. The first one that popped up was Elizabeth Roberta (Betty) Bridwell (Wilson) and I was shocked when I read that at age 64 she had tragically committed suicide by a ‘Self inflicted Gun shot wound to the head’ American record of death is so detailed compared to UK.

So, leaving the Wilson family in America behind, we are back to the old photos in the UK. These next two I particularly love & to have found them both with writing on the back was a bonus. At first after reading the back of the photo below, I really hoped I could find Grandpa Searle. Obviously I had a huge breakthrough when I found that Emily & Frank’s parents were James Alder and Louise Stallibrass SEARLE (In Part 2)

It was difficult to try and find the correct Louisa in the records, she and James were married in 1883, I usually assume firstly that the lady married between the ages of 20 and 30 before I look outside of these ages. So I started by searching the GRO Birth records from 1853 to 1863 and found two in the right area!

Usually when I’ve found two children of the same or very similar names in a family like this, it means that the first born has died and the parents have named the next child with the same name. So looking at the Deaths in the GRO I did find that the first Louisa had died aged just 1.           Deaths..1) SEARLE, LOUISA 1 (Age)
GRO Reference: 1854 S Quarter in KINGSTON Volume 02A Page 121

Finding Louisa Stallibrass Searle in the 1861 was brilliant, although I only had the initial of her & her siblings, but I did have Geo B Searle as her father. With more research it turns out that his full name was George Barker Searle, his parents were Joseph Searle (Shoemaker) & Sarah Barker. I also found a marriage for George Barker Searle on 11 Jan 1846 at St Leonard’s Shoreditch to Eliza Stallibrass, (whose parents were Thake Stallibrass and Anna Maria Crush) which confirmed my research and Louisa’s middle name of course. See Image of Marriage cert Below.

If you see below on the 1861 census there are other Barker family on the same page & there were more on the next page too, maybe related to his Mum? He had his father J for Joseph living with him also, a widower. But where was George Barker Searle’s wife Eliza? One theory I had was that she may have been visiting her Mum, as her Dad had died in 1850 and Mum Anna Maria Stallibrass didn’t die until November 1861. After a long search I managed to find Anna Maria in the 1851 census first, transcribed as Hallibrap! She was a School Mistress, widowed & her daughter Louisa b 1831 was living with her. Now to find Anna Maria in the 1861 census! I did and this time transcribed as Halliboss! With her daughter Louisa still, she is described as a Retired School Mistress, aged 74, but no Eliza. 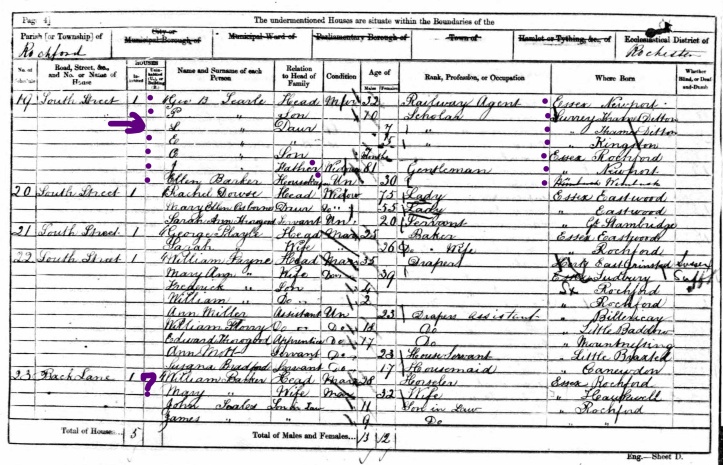 I came across this entry, image below in the 1861 census, that looks very very likely to be Eliza with two children, Edwin Searle b 1858 and Walter G Searle b 1860, living in West Ham. But here she is described as a wife of an operative Chemist? I’m puzzled… 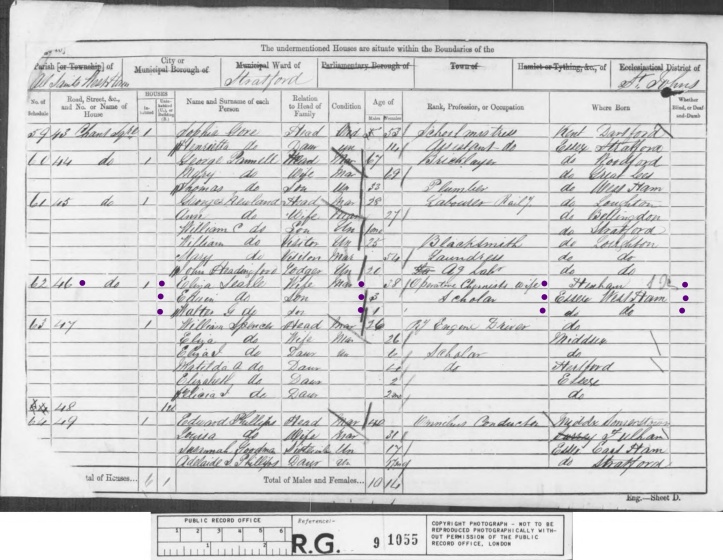 In the 1871 census George Barker Searle is a Lodger, a widower, living in Ealing, Brentford, Middlesex. He is alone, no children. I cannot find any certain records of Eliza’s death after 1861, some possibles but you would have to send for far too many certificates to confirm, so we have to assume that she had died by 1871. I have found a probable Louisa Searle in the 1871 census, as a General Domestic Servant for a Mr Berry & family in Kingston, Surrey, so it’s the right area. I also found one record on the 1871 census of an Emily Searle b1856, also working as a domestic servant in Mile End. That could be Emily Sarah? I do wonder what has happened to the children I haven’t traced? 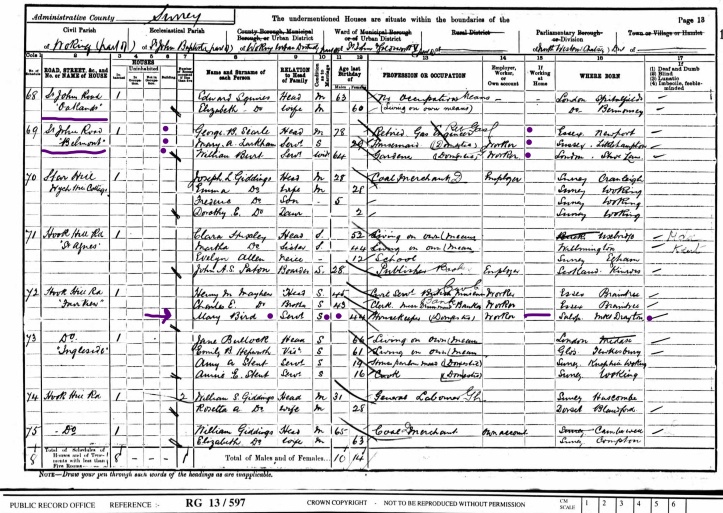 In the 1901 Census for George Barker Searle (See image above) it has Mary A Larkham age 29 from Littlehampton, Sussex as his Housemaid. Gardener is William Burt, Widower age 64 from London (Not as in the first photo Jim?) Also Just down the page a few doors away is a lady, a Housekeeper Mary Bird aged 44 from Market Drayton, Salop, is she the friend?  The absolutely super thing about this 1901 image of the census of course was that it also confirmed the writing on the second photo below… ‘Belmont’ St John’s Woking…. 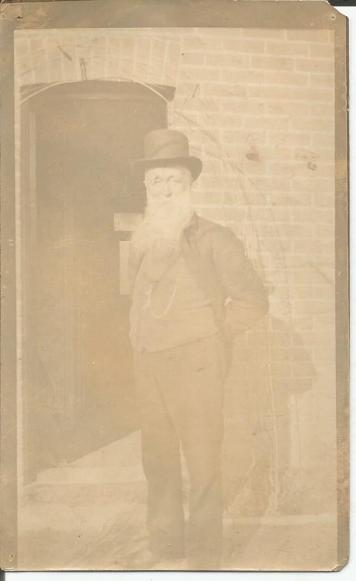 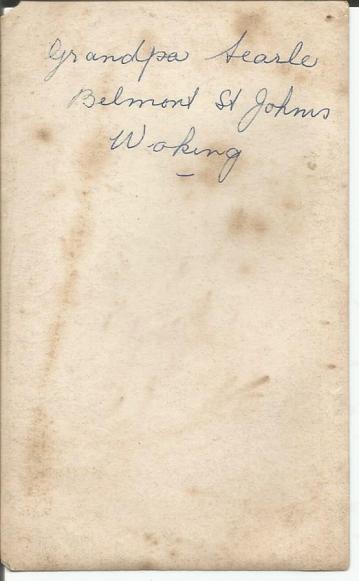 I think the boy mentioned in the first photo of Grandpa Searle was George James Alder born in 1884 to Louisa Stallibrass and James Alder, but as yet I haven’t got a certain candidate for Wallie. If the George is correct then the photo was taken about 1895/7, which certainly looks about right. Do you recognise anyone? Are they your Ancestors?

When I was researching this part of the family I found some wonderful records on the local Henham History Site, Parish records and much much more. Link here…  HENHAM HISTORY      Local village and town History Societies and Websites are often a wealth of information, if you know exactly where your Ancestors came from and need information.

Group Photo Above..Mystery part of the family, no writing…This group photo initially had me puzzled, but with a little help from friends, realised some were holding Croquet sticks! So was it a favourite game or did they make them? 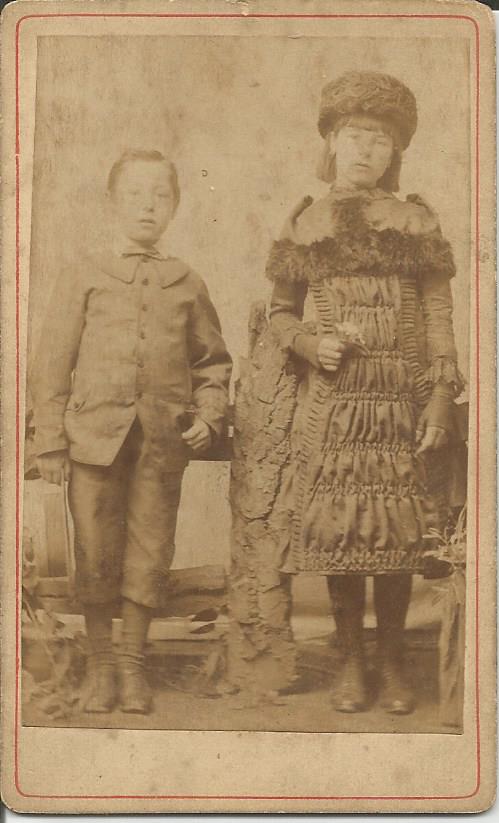 CDV photo above..I would dearly love to know who these two are, but alas no writing or Photographers stamp. 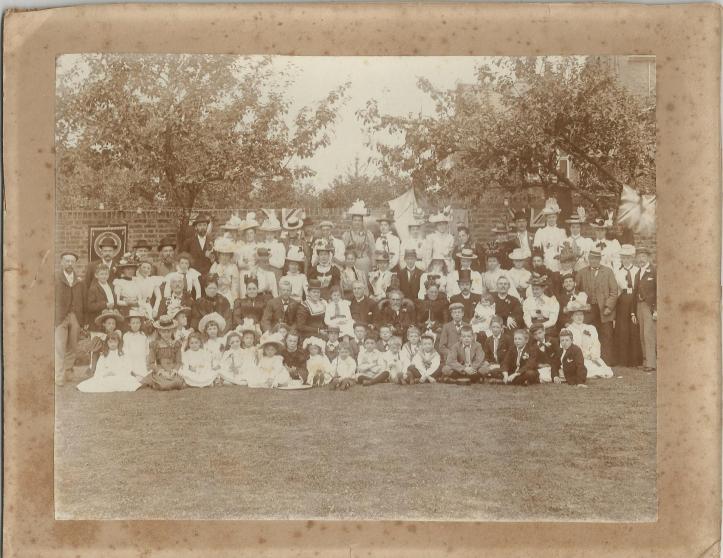 Large group photo above……What a splendid gathering! So many super outfits & gorgeous hats!! It looks likely to be a bit earlier than 1900, so maybe June 1897 Queen Victoria’s Diamond Jubilee Celebrations?

Next week will be the final part of the family history of this particular collection of Old Photos, and I will also share the link to the Ancestry Family Tree with you, I am still adding information to it.