Welcome to Part 2….Here’s the direct link to Part 1 if you haven’t read it yet. .Part 1 Lippiatt Searle Cobb Alder

As I have added more and more people to the family tree, working down the branches and adding husbands and wives, slowly I have come across more names associated with the old photos I bought and the giant puzzle is becoming clearer. 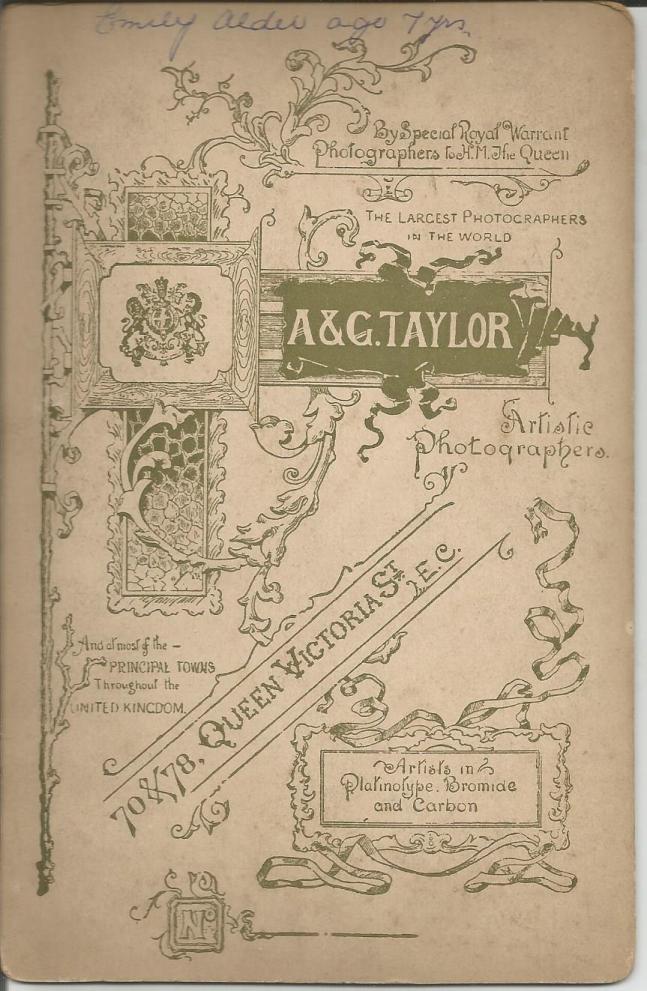 First is this lovely photo above on a Cabinet Card of Emily Louisa Alder, aged 7 years old, so as she was born in 1892, this would have been taken in 1899.

Second photo above also on a Cabinet Card taken of Frank Nathaniel Alder born 1895, so this would have been taken in about 1899, I assume both these above taken at the same time as the Cabinet Cards from the very well known Photographers A & G Taylor are identical. It’s the only matching Emily & Frank Alder I have found.

Here’s the tale of these next few old photos from this family……Charles Lippiatt married Maude Emma Sophia Wyatt, one of their sons, Ronald Herbert Lippiatt married Marjorie J Sear and her parents were Ernest Oliver Sear (EOSear & EOS on a couple of the pics) and Emily Louise ALDER (First photo above)Emily Louise Alder had 4 living siblings, one of which was named Frank Nathaniel SEARLE Alder, lightbulb moment!…I had found the name SEARLE!

It turned out that Emily & Frank’s parents were James Alder and Louise Stallibrass SEARLE, easy to get confused with Sear, plus I maybe had another clue to the next generation back Stallibrass, I had noticed this surname on one of the 1939 Register records I had looked at, living along the road to someone Ha! I couldn’t remember who! So I searched through the downloaded pages I had and found them, Elsie May b1891 & Thomas S b1913, they were living just along the road from Charles Lippiatt & Maude & their family.

1939 Register from Find My Past

I always try and remember to check along the road in census and 1939 Register records, you never know who you might come across, families tended to live much nearer to each other back then. So I’m hoping I might also eventually find where they fitted in the Stallibrass side of the family, if at all. More on them next week. 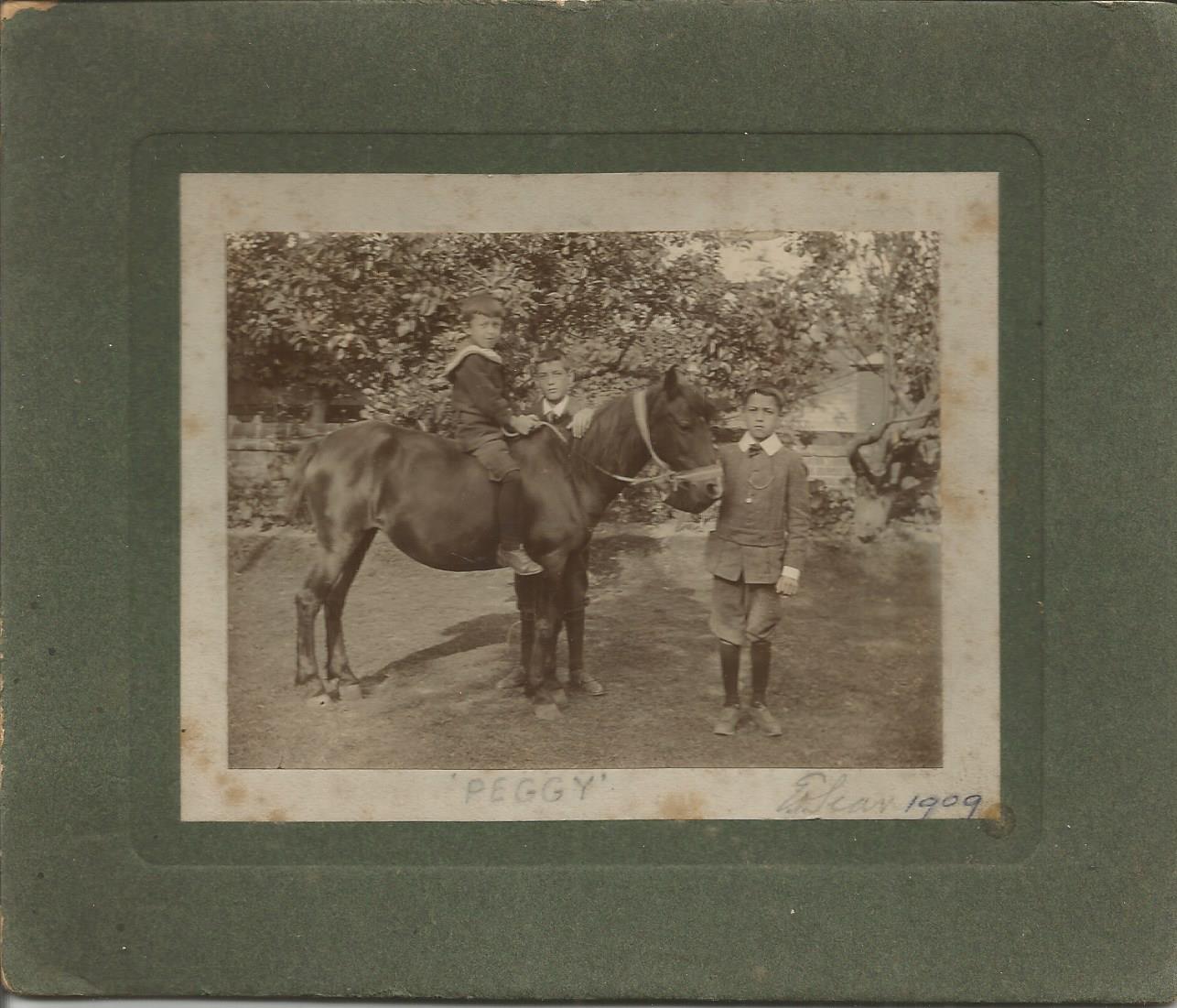 I’m sure now that ‘E O SEAR’ written on the above photo is Ernest Oliver Sear born 22 Jun 1892, he married Emily Louisa Alder (first photo) he had three living brothers in 1909, Herbert Arthur b1891, Edmund Charles b1894 & Frederic John b1898, they also had a sister called Jessie Marion Sear b1896 but she sadly died in 1901 just 4 years old. They were all born to Oliver Armstrong Sear and Edith Marion Farmbrough, who had married in Newport Pagnell, Buckinghamshire in 1890. As Ernest would have been 17 in 1909 & Herbert a year older this has me a bit puzzled as the boys in the photo seem younger than them. I wonder if the date was added at a different time, maybe incorrectly? What do you think?

This next one was the only Military photo in the collection I found, an old postcard, written on the back Charlie & Kitty 1919. I think from my research so far that these two are Katherine Wilson (Kitty) & Edmund Charles Sear (Charlie) Apart from the names & date written on the postcard we also have the fact that the photo was taken in Helston, Cornwall. Something I had written on my list of clues to remember.

So when I came across a family link to Helston, I just knew I had found the right people. It turns out that one of the four Sear brothers Frederic John married a young lady by the name of Irene May Cowls, she was born in Breage, Helston, Cornwall in 1900, they married in Helston in June 1923 just a few months after the birth of their first child, a boy Eric Farmborough Sear b14 Feb 1923. So I am assuming that Edmund Charles & Katherine were visiting his brother in Cornwall. How or why Frederic was in Cornwall earlier I don’t know, as he didn’t marry Irene until 1923, but it’s the only link I have found so far, the Cowls family. Edmund Charles came to visit from America in 1932 also, alone not with Katherine, but maybe they couldn’t afford for two tickets. 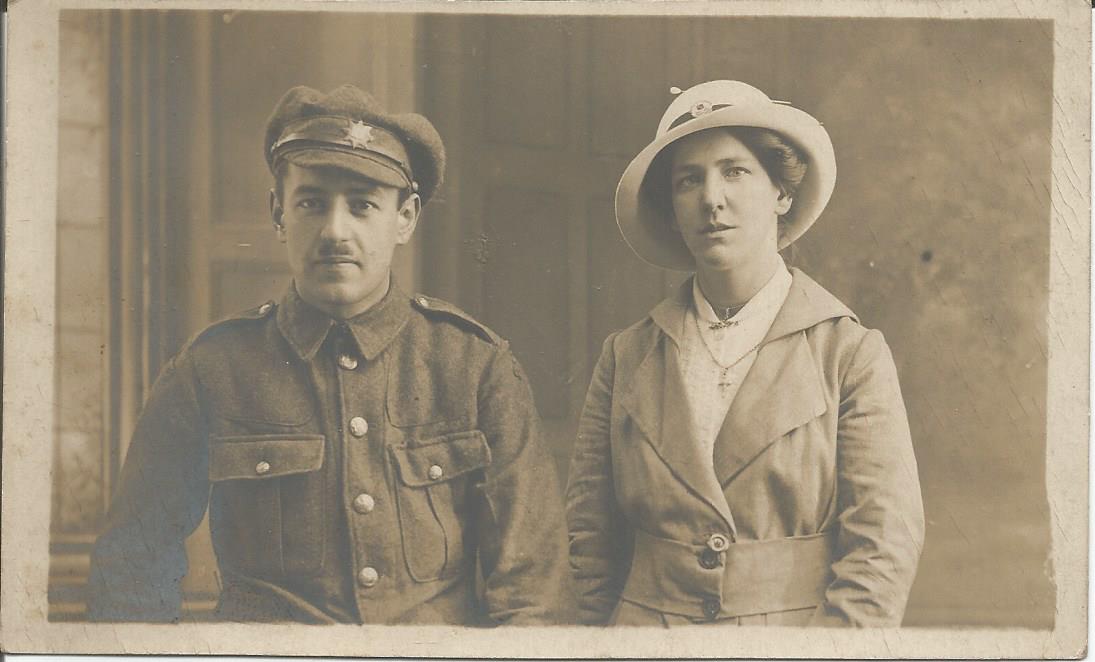 Edmund Charles Sear served the UK in the London Regiment, going to France in WW1, obviously meeting Katherine Wilson after returning, probably around 1919, did she come here to the UK after she finished college in America? When he went over to Canada in 1924 (See photo of document below) looking for work he stated that she was his wife, so the photo taken in 1919 is highly probable, he was 25 years old & she was 18 (ladies looked older than they really were back then) When in fact I have found they didn’t actually marry until 1931 in New York! 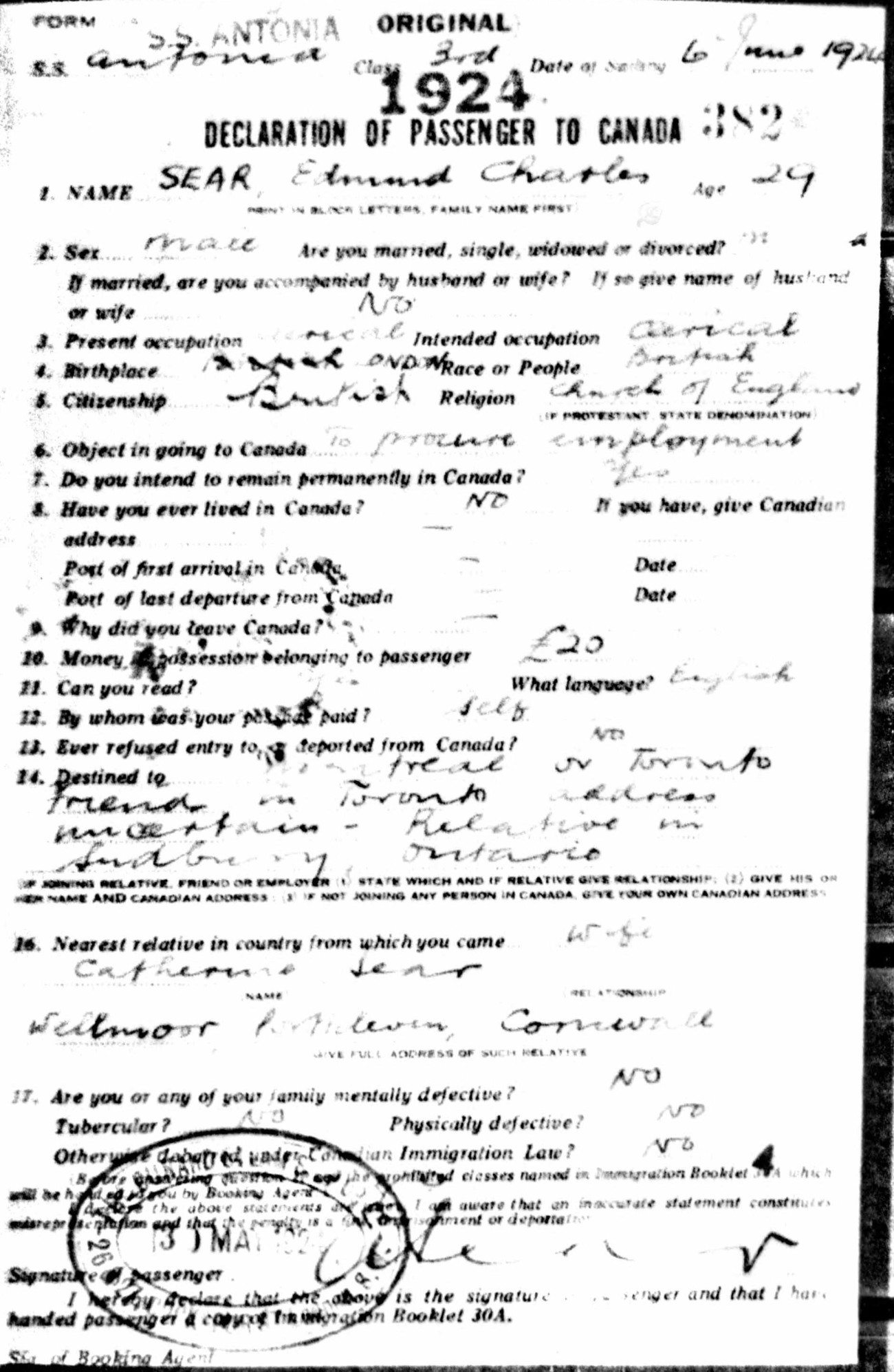 This document below is the 1940 US Census record. Charlie & Kitty in America, he is a travel agent & she a secretary for a fire extinguisher company. It looks like they have six lodgers. I have not found any children for the couple in the UK or America.

I found these records below from the newspapers, just after their deaths, they give us a bit more information about the couple & their lives, which I have added to their part of the family tree.

“Edmund Charles Sear, 57, husband of Katherine Wilson Sear, formerly of Delphi, died Monday morning in a New York hospital following a brief illness. Funeral rites for Mr. Sear were held Wednesday and the body was to be cremated and later is to be brought here for burial in the IOOF cemetery. Mr. Sear is a native of Cornwall, England, and for many years was connected with a travel agency in New York. With his wife, he had visited his mother-in-law, Mrs. Francis Wilson in Delphi last August. Mr Sear was a veteran of World War I. ……FROM  Delphi Citizen January 17, 1952

Mrs. Francis Wilson has received word from her daughter, Katherine, in New York City that the latter’s husband, Charles Edmond Sear 57 pasted away Monday at a hospital in New York, where he had been a patient for two weeks. A native of Cornwall, England, he was born on August 13, 1894. He leaves the widow, the former Katherine Wilson of Delphi Funeral services were held Wednesday at the St. Episcopal church in New York City. ……FROM  Delphi Journal January 17, 1952″

“Funeral rites were held in New York City Tuesday for Mrs. Katherine Wilson Sear, Delphi native, who died Saturday night following a lingering illness. The body will then be cremated and the ashes returned to Delphi for burial at a later date. Mrs. Sear was born in Delphi, the daughter of the late Francis and Mary McDonald Wilson. She was graduated from Delphi high school in 1919 and for many years has been a resident of New York City. Surviving are two brothers, Harry Wilson of Lafayette and Robert Wilson of Delphi; four sisters, Mrs. Marjorie Lorber of New York, Mrs. Ruth Hufford of Chicago,  Mrs. Betty Bridwell of Bedford and Mrs. Esther Barber of near Burlington…….FROM Delphi Citizen November 28, 1963.”

Charlie & Kitty are both laid to rest here at the I.O.O.F.Memorial Gardens

Part three to follow next week, I’m still adding to the family tree so more to be revealed then.