Over the last month, whilst we have been decorating, I have been sorting all my huge array of boxes & bags of old photos. They are now, all back in my newly painted study, in their new storage boxes. I have probably enough to last me at least a couple of years research !! While sorting I came across this account of Maiwand 1880, by BSM W.Paton, plus four appointments to the office, of him & two other members of his family, spanning three Monarchs, Queen Victoria, Edward & George, but who are they ??

I remember buying these over a year ago, because I just didn’t want them to go astray somewhere. I thought anyone who is interested in Military items & collecting, would love them. As these weren’t old photos, I thought I would tackle these first.

The majority of the information about the Battle of Maiwand here below, including pictures, is from the wonderful website BritishEmpire.Co.UK

“Saving the Guns” by RC Woodville 1882 depicts a famous incident during the battle of Maiwand when, with the infantry broken and a horde of fanatical Afghan tribesmen charging down on the 9 pounder guns of E/B Battery RHA, the gunners succeeded in extricating all but two of them, gallantly fighting the enemy off “with handspikes and sponge-rods“.

“On 3rd July 1880 a British/Indian column of some 2700 fighting troops under Brigadier George Burrows set out from Kandahar. It consisted of one Infantry and one Cavalry Brigade on their way to support a force of 6000 British-equipped and allegedly friendly tribesmen in putting down a rebellion by one Ayub Khan. Ayub, the Governor of Herat, and his followers intended to replace the new Amir of Afghanistan, a British protege, at Kabul. In the event most of the ‘friendly tribesmen’ mutinied and went to join Ayub, leaving Burrows’ force to face the approaching rebel army alone in countryside where every man’s hand had suddenly turned against them.”

Firstly I started a small Paton family tree, to see where the people fit in, & how they are related to each other.             Also I wanted to find out more about the Granddaughter Mrs. CDS Kennedy who donated the original to the Battery on 18th March 1957. 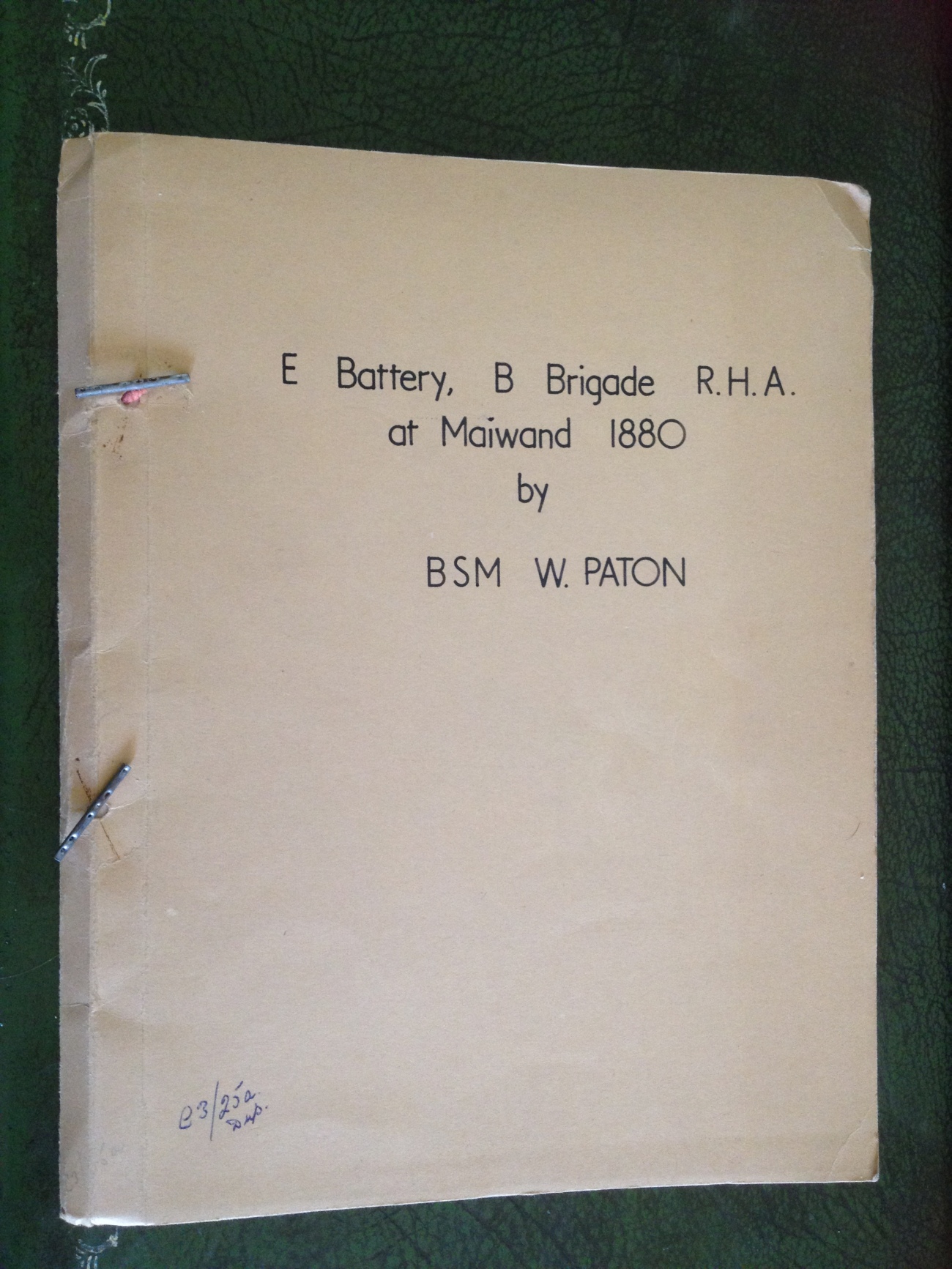 Are you a descendant of William (Stirling Clark) Paton ? Do you know the Paton family ?

Here is the first few pages of the account…. 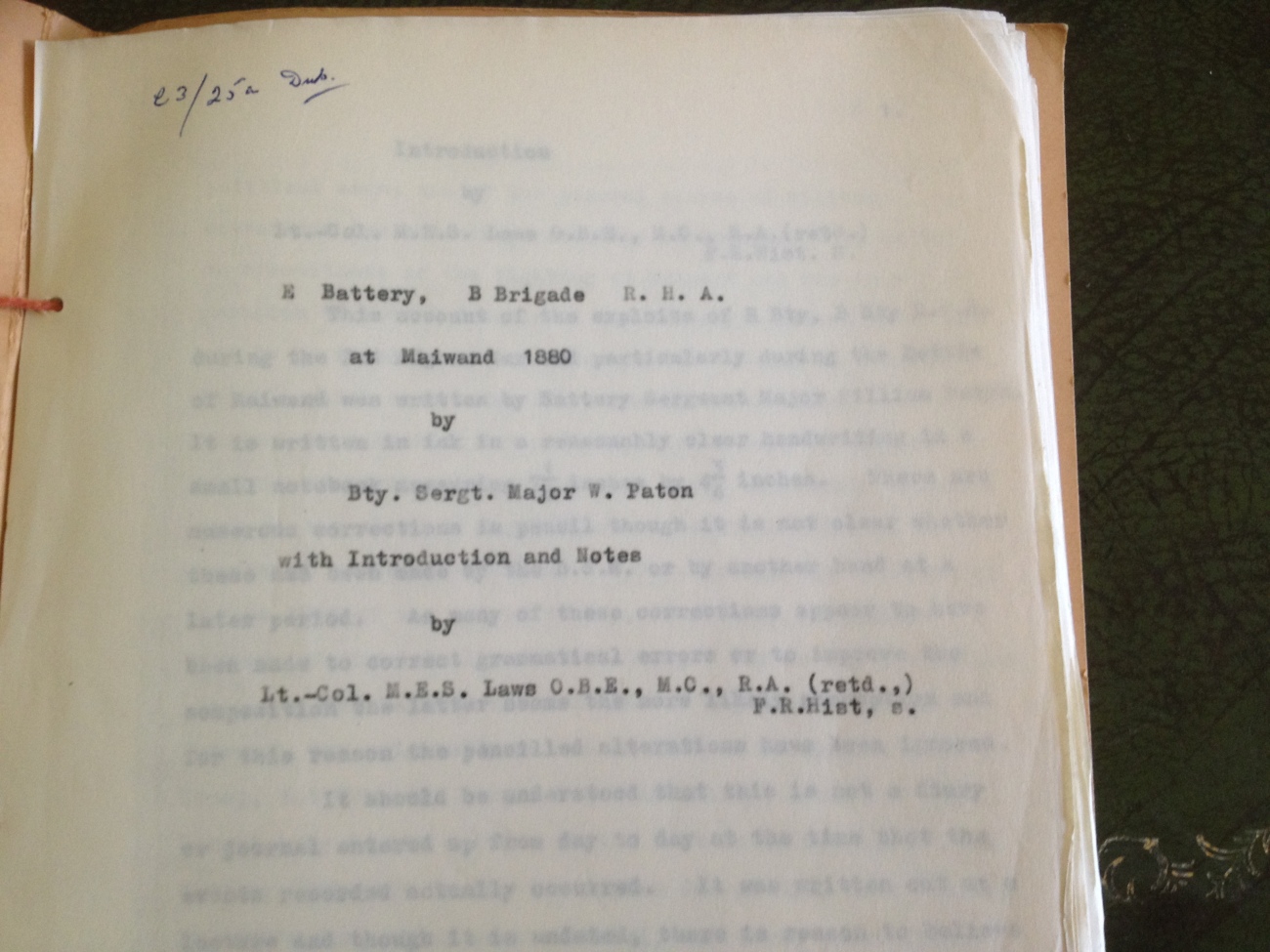 These are the four admission to office documents that I bought with the account of Battle…….. Queen Victoria is Queen for the first one for William Paton.…. 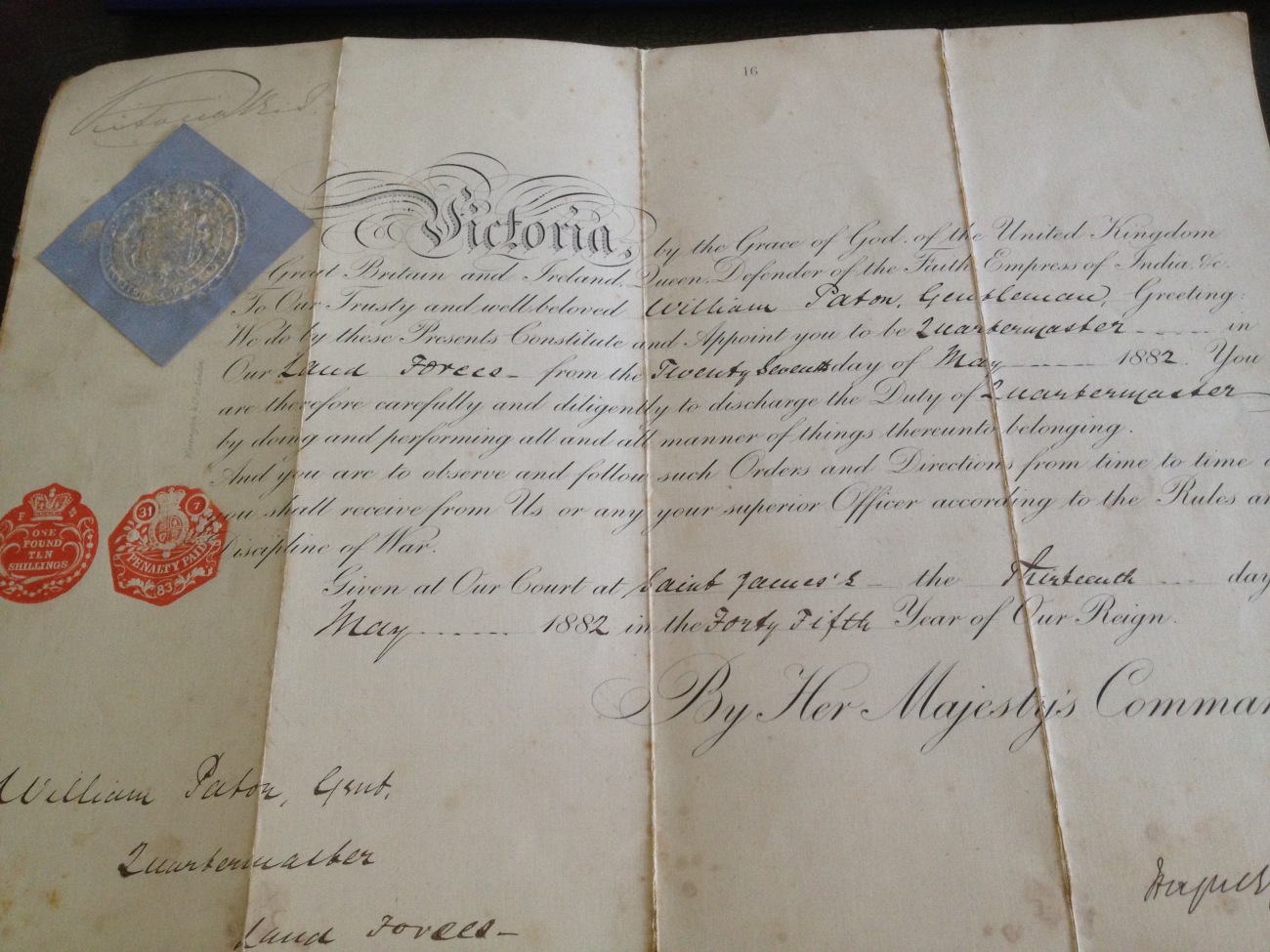 Then Edward the Seventh is King for the next two, for Ramsay Slade Stirling Paton.….. 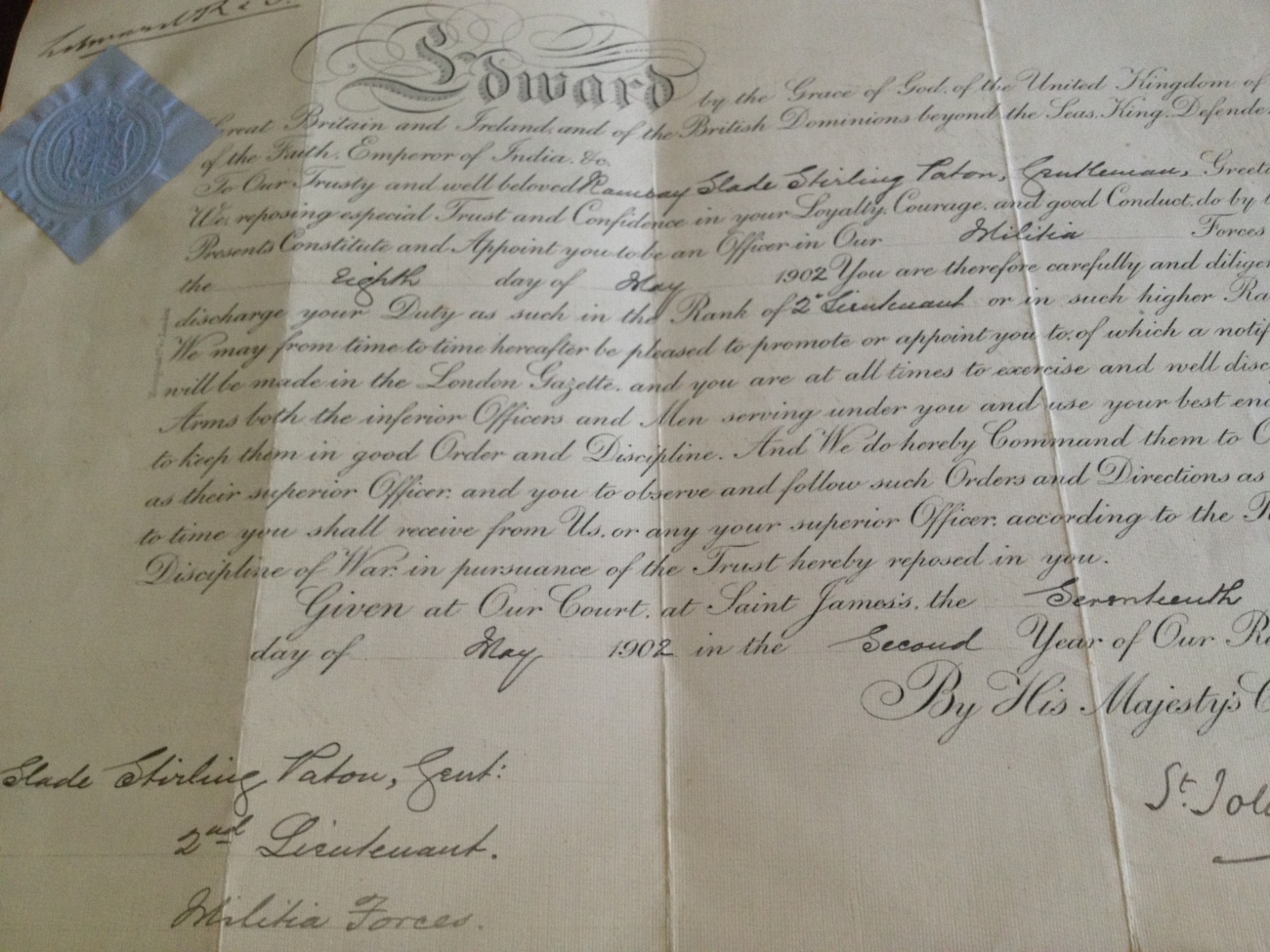 George the Sixth is King next for the last one of John Ramsay Paton, son of Ramsey Slade Stirling Paton 1884-1965. Grandson of William (Stirling Clark ) Paton …..

When I was researching these documents,I also found reference to Medals that were sold in auction. Firstly the DCM Distinguished Conduct Medal awarded to William Paton for the Battle of Maiwand, top two pics below…(Sold in 2001) Then another sale of Medals in 2004 (bottom two pics below) again with associations to the Battle of Maiwand…Lots more info on the Auction House pages about the Medals & the Battle. 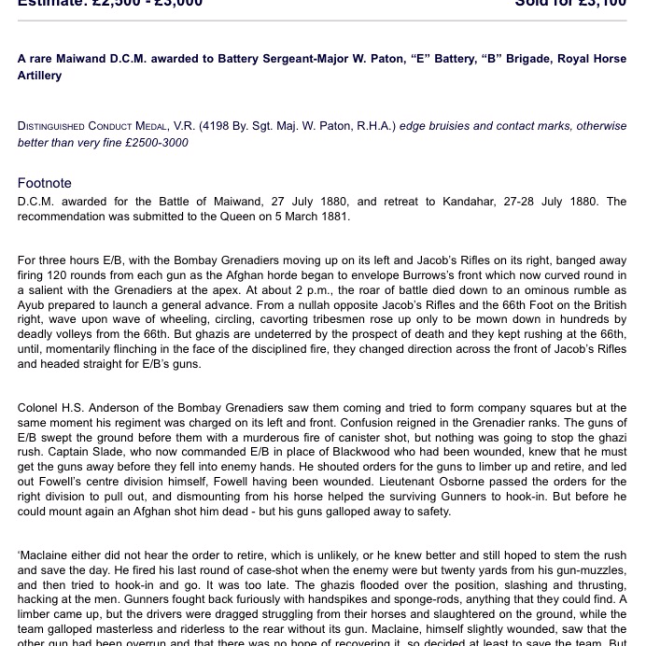 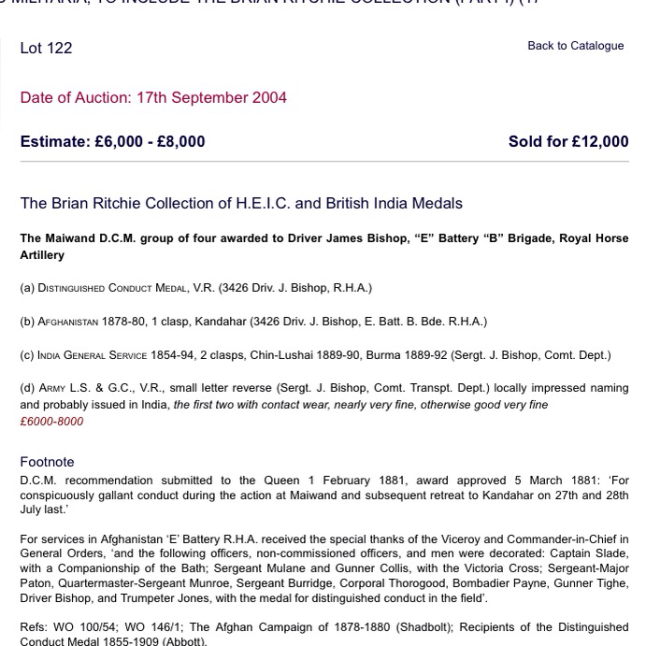 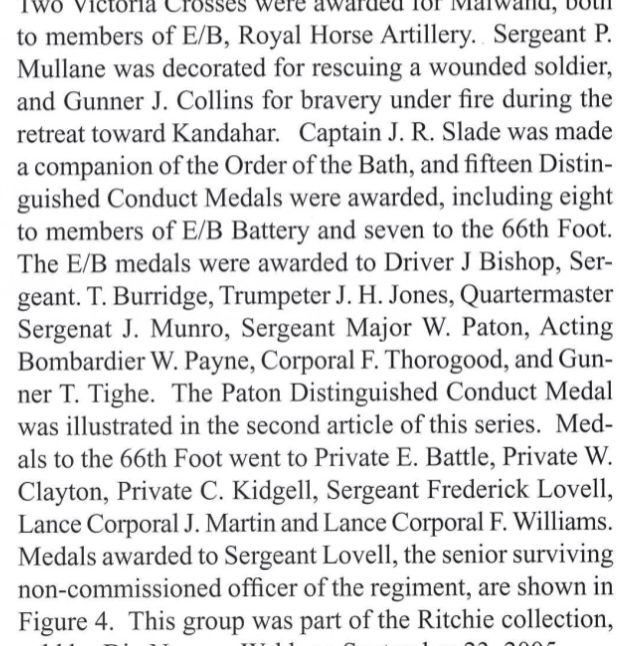 Afghan Medal to E Battery B Brigade for the Battle of Maiwand. Photo above & info below from EMedals.com………(This particular Medal sold for nearly £3,000 !)

“A Second Afghan War Medal to “E” Battery “B” Brigade – Peiwar Kotal, (Grass Cutter Sunka Pandos E. Bty. B. Bde. R.H.A.) Naming is officially engraved in italic script, better than VF. Footnote: On the afternoon of the 26th July information was received that the Afghan force was making for the Maiwand Pass a few miles away Burrows decided to move early the following day to break-up the Afghan advance guard. At about 10 am horsemen were seen and engaged, and the brigade started to deploy for battle. Burrows was not aware that it was Ayub’s main force. The Afghans, who numbered 25,000 including Afghan regular troops and five batteries of artillery including some very modern Armstrong guns. The Afghan guns gradually came into action and a three hour artillery duel ensured at an opeing range of about 1700 yards, during which the British captured smoothbore guns on the left expended their ammunition and withdrew to replenish it. This enabled the Afghans to force the left hand battalion back. The left flank comprising Indian infantry regiments gave way and rolled in a great wave to the right, the 66th Regiment, the backbone of defence, were swept away by the pressure of the Ghazi attack.[4] E Battery / B Brigade Royal Horse Artillery (Captain Slade commanding) and a half-company of Bombay Sappers and Miners under Lieutenant Henn (Royal Engineers) stood fast, covering the retreat of the entire British Brigade. E/B RHA kept firing until the last moment, two sections (four guns) limbering up when the Afghans were 15 yards away, but the third section (Lt Maclaine) was overrun. Maclaine was captured and held as a prisoner in Kandahar, where his body was found at Ayub Khan’s tent during the British attack on 1 September, apparently murdered to prevent his liberation. The British guns captured during the action were also recovered at Kandahar. E/B RHA came into action again some 400 yards back. The Sappers and Miners retreated as the guns withdrew. Henn and 14 of his men afterwards joined some remnants of the 66th Foot and Bombay Grenadiers in a small enclosure at a garden in a place called Khig where a determined last stand was made. Though the Afghans shot them down one by one, they fired steadily until only eleven of their number were left, and the survivors then charged out into the masses of the enemy and perished. Henn was the only officer in that band and he led the final charge.” 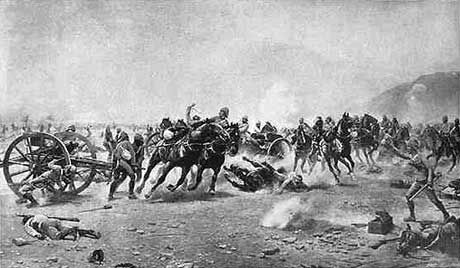 I was astonished to see that my hometown of Reading, Berkshire has the Maiwand Lion..I have been in Forbury Gardens many many times & never realised what it was or why it was there or the history behind it!  The association is also present with the Lion being on the crest of Reading FC, & the Bugle Pub in Reading was named after the Battle of Maiwand soldiers from the town. 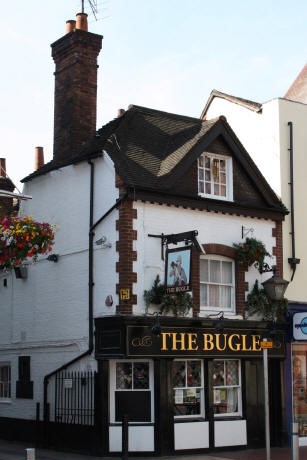 Info from Wikipedia.. “The Maiwand Lion statue was erected in 1886 to commemorate the loss of 286 soldiers (though the exact number varies by account) from the 66th Royal Berkshire Regiment at the Battle of Maiwand in Afganistan on the 27 July 1880. The sculptor of this 31-foot statue was George Blackall Simonds and was unveiled in December 1886. It is known locally as the Forbury Lion”

“The lion should equally be considered a memorial to the soldiers of the Royal Horse Artillery, the 3rd Bombay Cavalry, the 3rd Scinde Horse, the 1st Grenadiers, the 30th Bombay NI, Jacob’s Rifles, and the Bombay Sappers and Miners who died in the service of the British Crown at the Battle of Maiwand.”

There is a detailed record of casualties listed & lots more information on the excellent website……  Roll Of Honour, Berkshire

More information here too on the website National Army Musem  about the 66th Berkshire Regiment, their Army Barracks being at Brock Barracks, Oxford Road, Reading, Berkshire (I lived almost next door to the Barracks  for over two years in the early 1980’s)

Written on the website BritishBattles.com   which also has lots of information about the Battle & many pictures…Including this one below of Queen Victoria presenting Medals to the the 66th Regiment after the Battle of Maiwand.. 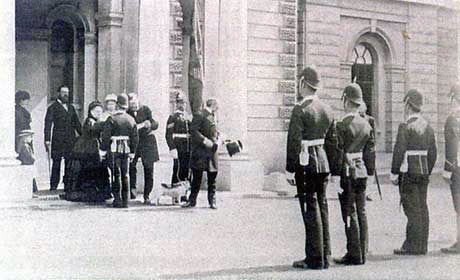 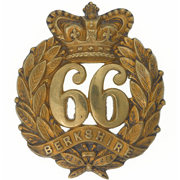 For lovers of Sherlock Holmes & Dr Watson, they also have links to the Battle of Maiwand..

“How are you? You have been in Afghanistan, I perceive.’ Sherlock Holmes’ first words to Dr Watson in A Study In Scarlet are among the most famous introductory lines in literature. They are spoken to Dr John Watson, the narrator of Sir Arthur Conan Doyle’s Holmes stories. Watson is baffled as to how Holmes, who has never met him, could have known he had just returned from Afghanistan, where he was wounded in the Battle of Maiwand in 1880. ” Read more: http://www.dailymail.co.uk/news/article-2095088/The-REAL-Dr-Watson-The-Victorian-army-medic-inspiration-Sherlocks-trusty-sidekick.html#ixzz4nSkhvoQS

As you will see if you go to the ‘Paton Family Lynn’s Waffles’ Tree I have made, Granddaughter Mrs. C D S Kennedy was actually born Jane Ann Paton in 1916 to Ramsey Slade Stirling Paton & his wife Marianne Janet Bowring. Jane is the older sister to John Ramsay Paton. Jane married Colin David Stuart Kennedy in 1939 in India, he became a Brigadier & was awarded a CBE. Jane was known as Mrs CDS Kennedy. William (S C ) Paton was most definitely her Grandfather, being the father of Ramsay SS Paton.

I so wanted to find a photo of William S C Paton, just to put a face to the information I had collected, after lots of searching different links, which led me nowhere, I went back to the Newspaper Archives on Find My Past & after changing the details in search boxes many times, hooray ! I found not one, but two ! The one on the left here is super..               It appeared in The Graphic, London on 21 May 1904. A real portrait by Argent Archer of Kensington, London. 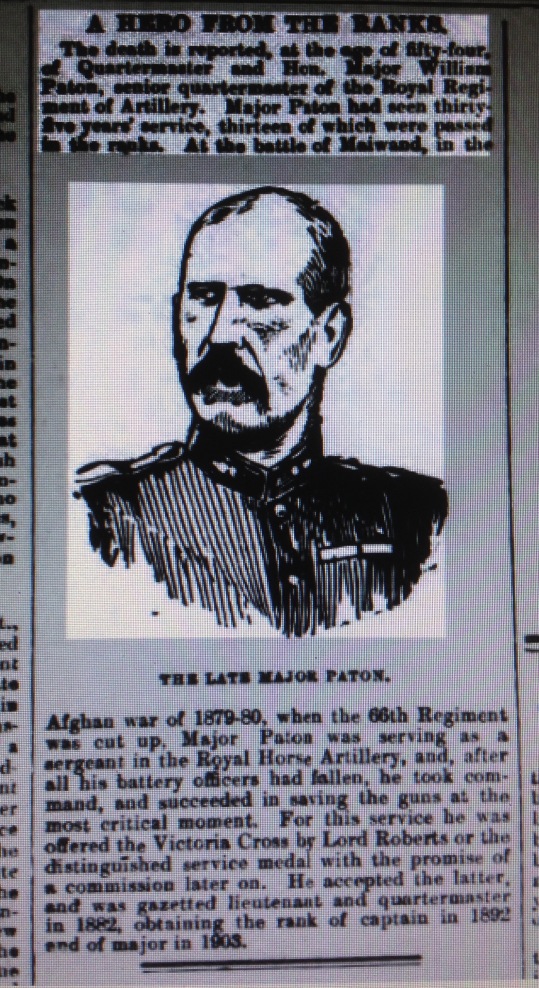 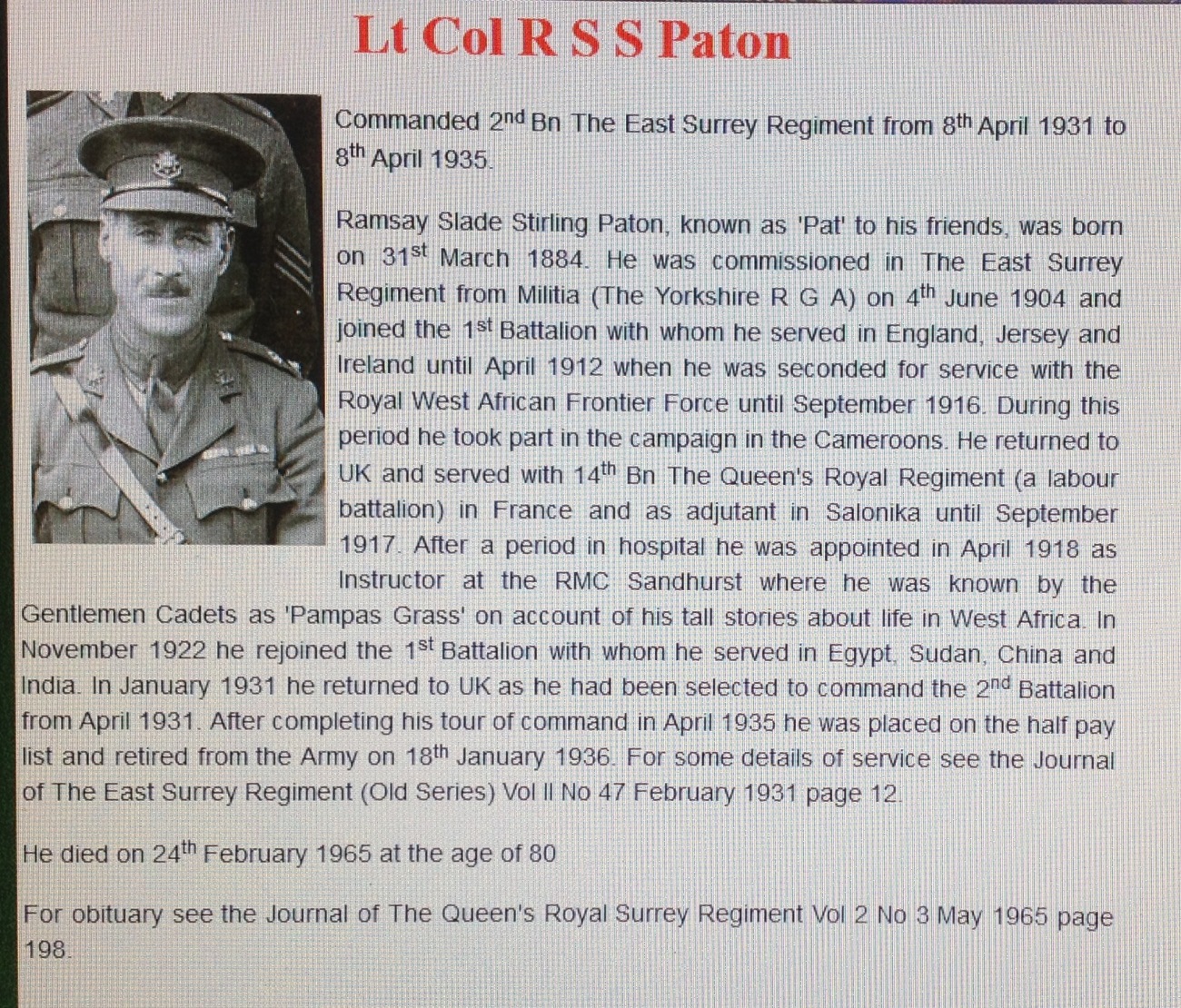 It was lovely also to find a photo & more information about William’s son Ramsay, but I just cannot seem to find out too much about John Ramsay Paton, born in 1919 in Surrey, apart from some records from WW2. He was a prisoner of war, taken by the Germans to Oflag Camp “Name J R Paton Rank Captain Army Number 144618 POW Number 251 Camp Type Oflag Camp Number XII-B Camp Location Hadamar, Hesse” From 1941-1945. (See Tree Information) After this date 1945, I have drawn a blank. Did he die after he was released in 1945. There are possible J R Paton’s in Canada, America, Australia & here in the UK. But I don’t know for sure what became of him, do you know ??

I would very much like these documents to be returned, maybe to the Paton Family descendants (If any are found) or a Military historian, collector or a Museum or somewhere where they will appreciated.