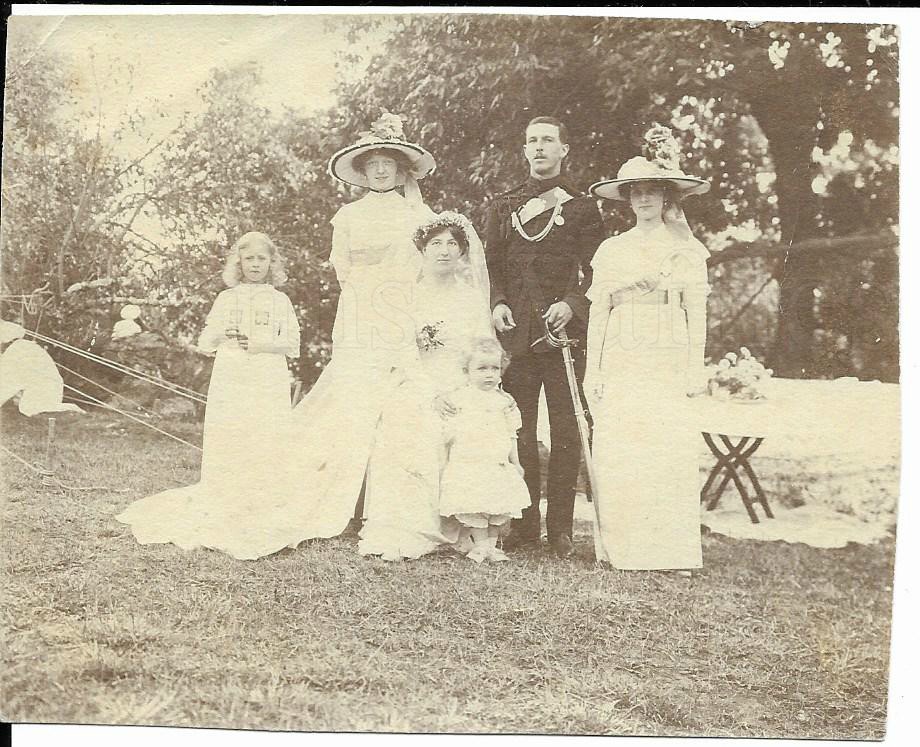 I only posted this blog today & astonishingly later this afternoon one of my lovely Twitter followers found the marriage of the couple on the British Newspaper Archives.

So I went to the newspaper report and my goodness what an amazing account of the Wedding! Miss Ursula McMinn between the red marked dots on the report. See below:

So I intended to update the blog tomorrow morning. But during this evening something was ringing bells in my head, the name Inglis and Kennedy. So looking through my public family trees on Ancestry I found what I suspected, I found the couple, they were on my Paton Family Tree! See link at end of this blog.

I had previously written about the Paton Family back on 21 July 2017. This is the direct link to that Blog: BSM William Paton

This couple in the wedding photo had a son on 20 May 1914 in Hythe, Kent called Colin David Stuart Kennedy.CBE. Brigadier. Colin himself married in 1939 to Jane Agnes Paton who was the Granddaughter of William Paton 1849-1904 who I wrote the Blog about.

The sad thing about this beautiful Wedding photo is that the groom above Gilbert Stuart Kennedy was killed during the first world war on 12 March 1915 at the Battle of Neuve Chapelle, France. He was a Captain, 1st King George’s Own Gurkha Rifles (The Malaun Regiment). His son Colin was less than a year old.

My lovely friend Simon of Charnwood Genealogy  sent me a message at about the same time that I was posting this blog, he was letting me know about Gilbert’s death in 1915. Great minds! Here’s the information from the IWM website that he gave me and also three beautiful photos that Simon has kindly shared with me that he took back in February this year when he visited the Neuve Chapelle Indian Memorial in France. What a beautiful peaceful place. 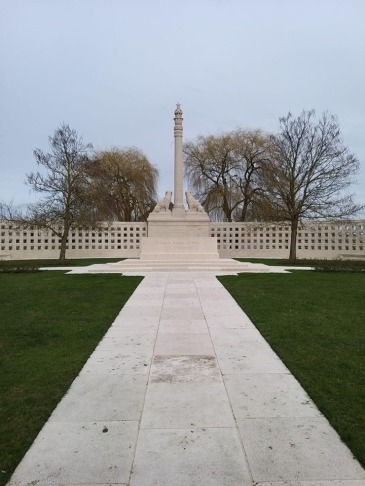 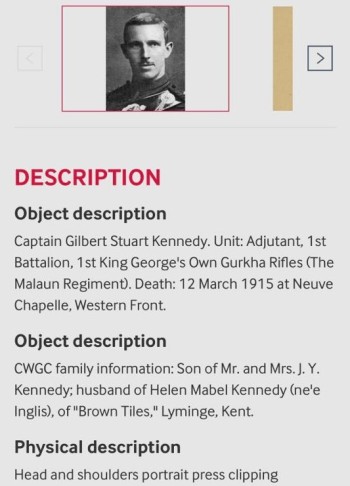 Here’s their family tree that I compiled on Ancestry, a direct link: PATON Family tree

The Paton collection I shared now belongs to a collector and is in very safe hands.

So that was such a weird coincidence that I should have this photo about people I had already written about…..BUT it gets even more strange and spooky when I tell you that this afternoon just after I posted today’s Blog I sent a reply back to a lovely chap who had contacted me about the Paton family….and you won’t believe it but he is a descendant of this Wedding couple!! So I shall have a lot more to tell him now! I wonder if he has this photo? Wouldn’t that be lovely if I can pass it on to him? Will update you all on that.

What a tale, you couldn’t make it up could you.

Till next time then……