See UPDATE at end of this Blog, more photos found by Diana, written on by Jack! 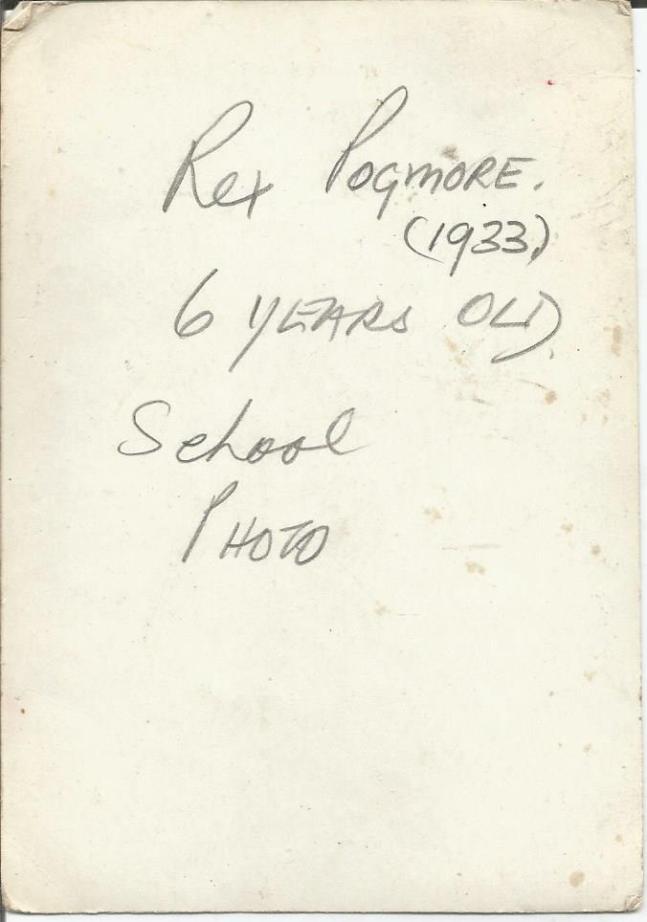 We went off to a Car Boot sale recently out of our area near Wimborne, Dorset and I was lucky enough to find a nice few old photos, including this small collection that I had chosen because they all had writing on the back. I was really pleased when I got home to find they were all connected to the same family POGMORE. It also seems that they had belonged to a Rex Pogmore, pictured above aged 6 years old and below again at aged 18. 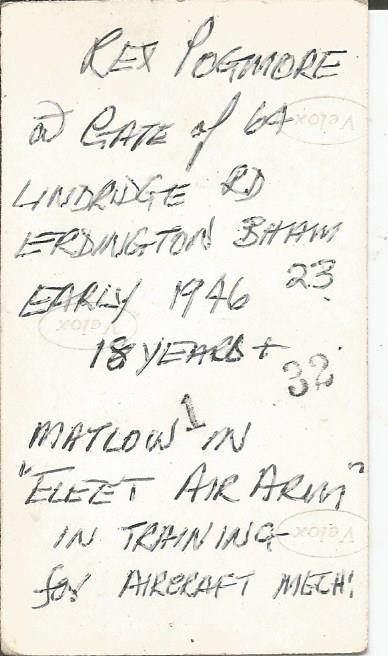 So I’ve started a tree on Ancestry with Rex and been able to add quite a few family members. The photo above was taken before Rex married and it seems his training in the Fleet Air Arm as an Aircraft Mechanic, stood him well as I’ve found him described in later years as an Engineer, then a Plant Manager.  It seems probably that Rex and his wife Elsie Margaret (Lacey) both passed away in 2015 and 2016 respectively, in Banbury, Oxfordshire. I have found three possible children of the marriage, I have not been able to confirm, but saw on an Public Ancestry Tree, so maybe these were photos involved in a house clearance that the family didn’t want to keep or they slipped through the net? Understandable if maybe the children of the marriage lived in Canada the Country where they were brought up. 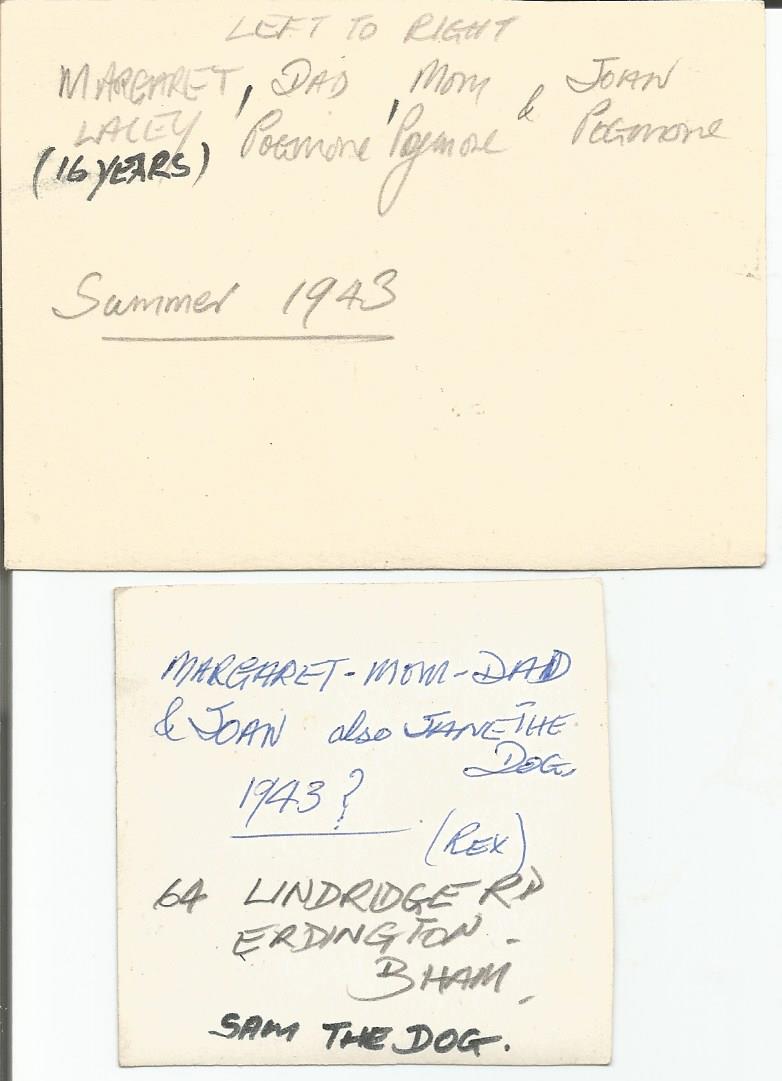 This is the Pogmore Family home at 64 Lindridge Road, Birmingham now (on the right) on Google Street, all the houses in the road are a similar style.

PHOTOS ABOVE…I was lucky that there was enough information on the back of all these photos, especially the group one above, to piece together the family. There were two copies of the that photo with different writing on each, which was very helpful. Especially having their address too. Joan (far right) was one of Rex’s sisters born in 1920. Margaret Lacey on the left I think maybe the lady that Rex married? Her name was Elsie Margaret Lacey and the date fits as she was born in 1927, so maybe she didn’t like the name Elsie and was known as Margaret? I was initially puzzled by the spelling of MOM, not MUM until while researching the family I found that Rex and his wife Elsie Margaret had married at the beginning of 1949 in Birmingham, then in 1950 they emigrated to America, settling in Ontario, Canada. Hence the different spelling. The last trace of the couple in Canada I found was 1968, so sometime between 1968 and them appearing on the British Electoral Rolls for 2003-2009 at The Old Forge, Upper Brailes, Banbury, Oxfordshire, they obviously came back to Britain. The Old Forge is a beautiful Grade 2 listed thatched cottage that was for sale for around £500,000 in 2017….Image below… 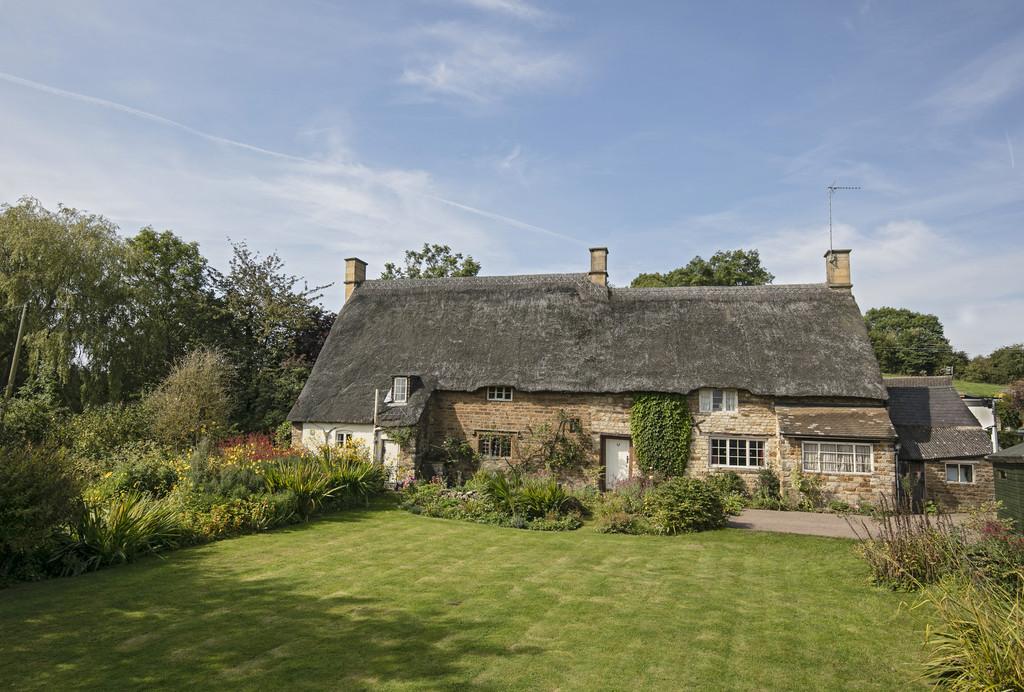 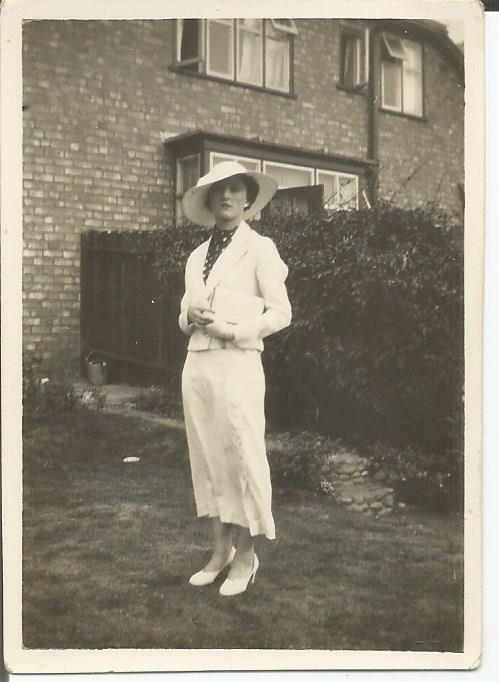 Love this photo above of Peggy (Margaret?) Pogmore, Babe to family and friends!

Kathleen Lamphier Pogmore (Eldest sibling of Rex) above married Richard Owen Cherry in Birmingham, 1946. They had two children that I have found, firstly Susan M born in 1946 and Robert J born in 1949 both registered in Sutton Coldfield, Warwickshire.

Here’s a bit more information about the family of POGMORE from the family tree I have compiled. I did notice while researching that there is an awful lot of obviously incorrect information on some of the family trees that are public on Ancestry, probably people as usual just copying someone else’s tree information, without checking for themselves or sourcing records to prove, such a shame, but very common unfortunately now. 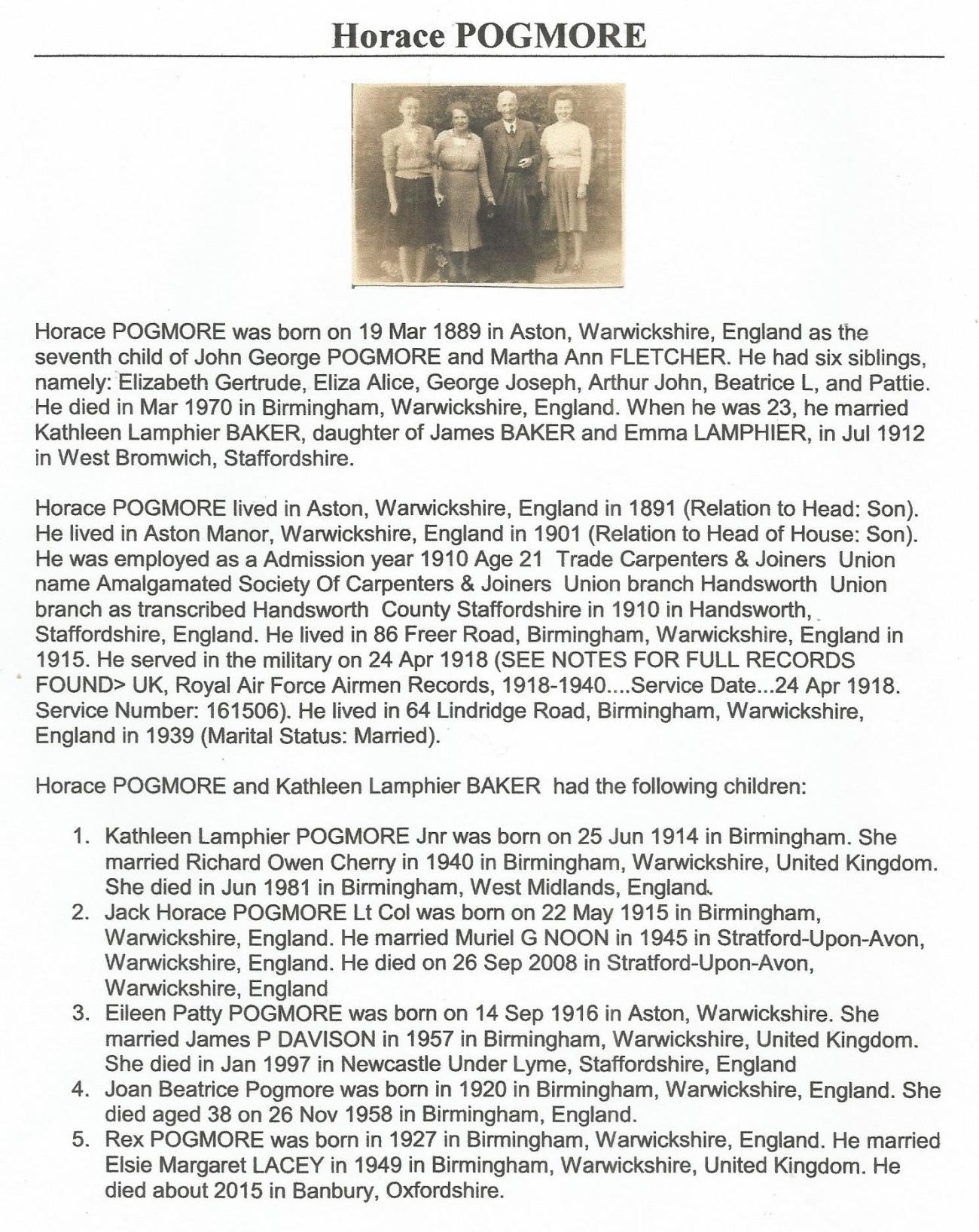 This information above is what I have found out about Rex’s eldest brother Jack Horace POGMORE who left the Military as a Lt Col.

Jack Horace’s last known address in Church Street, Stratford Upon Avon in the Electoral Register 2003-2008. He died in September 2008. (Taken from Google Street)

The name Lamphier used as a middle name originates from Rex’s Maternal Grandmothers family who came from just outside Birmingham in Handsworth, Staffordshire. Rex’s Great Grandfather Jacob Lamphier was born in Shrewsbury, Shropshire, so just a bit further west, about 45 miles. Jacob Lamphier was a Hairdresser in Soho Street, Handsworth until he died in 1866 aged 46. After he died his wife Susanna was listed as a Shopkeeper, Tobacconist, Soho St. Handsworth, Warwickshire, England. So I would think changing the use of the premises to continue making a living as her youngest child was only four when Jacob died.

LINKS……….Discovered this super website while looking for Military information about the Pogmore Family, lots transcribed from the National Archives, well worth a look! Geoff’s Great War pages

Do you have connections to this family? Are they your Ancestors?

Do you recognise anyone in the old photos?

UPDATE. I’ve had a super email from Diana (24 Dec 2018) who also loves old photos & this is what she wrote “I was at Wimborne car boot today and came across some photos with writing on the back – I thought how interesting I am going to investigate the family, something I have done many times before and reunited them with the family.
The two photos I had were regarding the Pogmore family
I googled the name and lo and behold came up with your website saying that you had done exactly the same at Wimborne Carboot
So attached are the two I found, I assume they were in a different box to the one you looked through. Images below
Perhaps they are another link in your research?
One day hopefully a Pogmore may contact you?” Thanks so much Diana, great to have more faces from the family!

Wonderful to see Jack with his Twin Daughters born in 1948, Elizabeth & Linda. 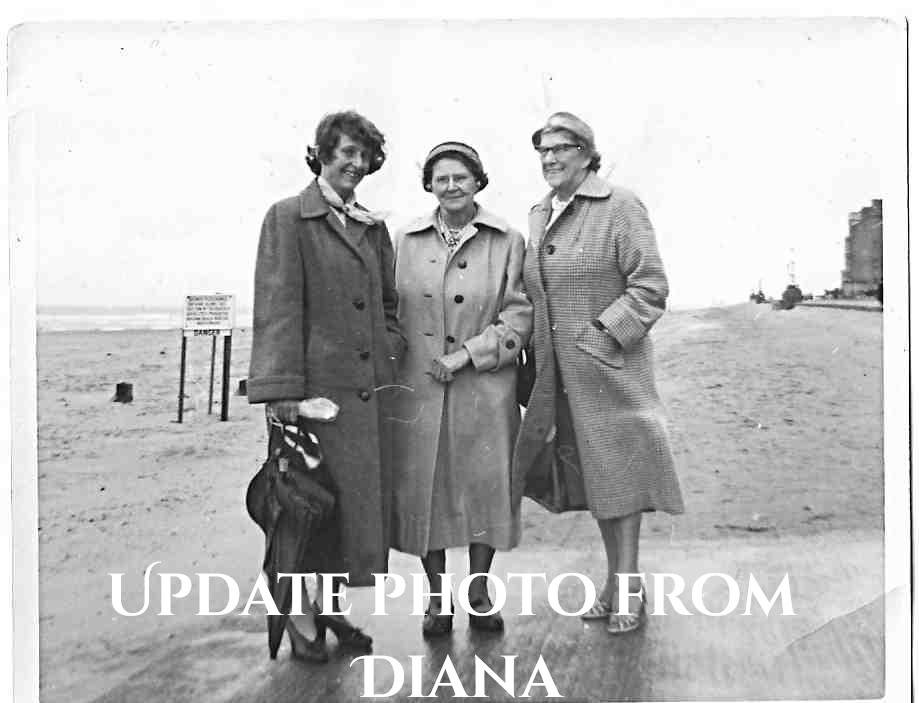 Jack’s Mum with her sister 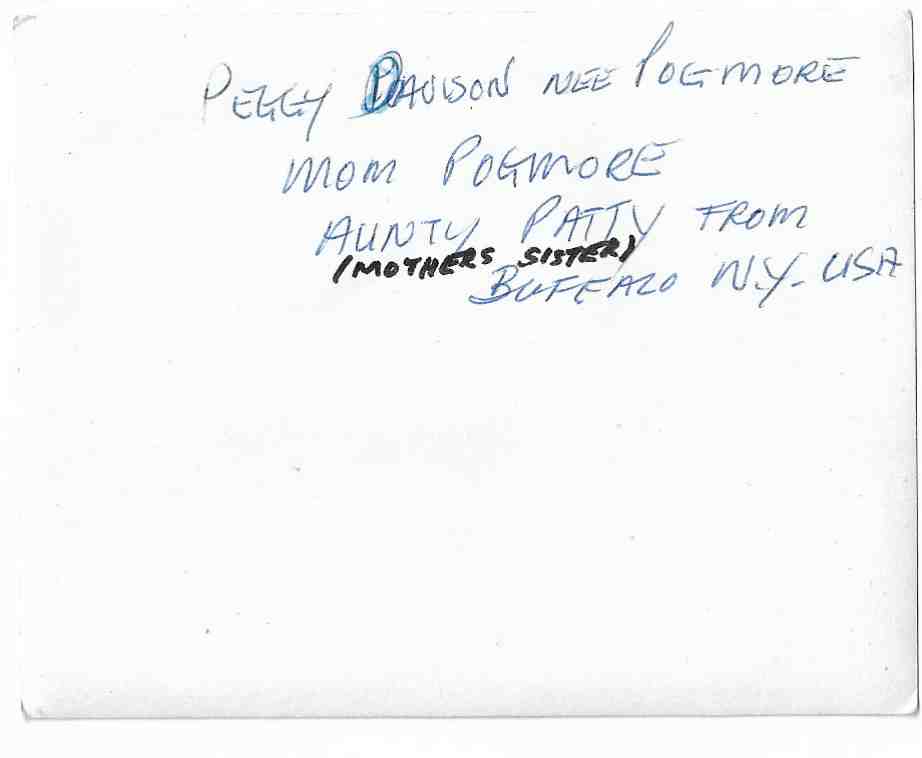 Good to have more confirmation that the writing on the back of these photos was the work of Jack Pogmore. Correction on this photo above where it says (Mothers Sister) that is wrong as Pattie was Horaces Sister.

UPDATE No 2. Have had a wonderful email from Sue a lovely lady living in Canada. Sue has given me some more info on the family. Horace & Kitty were her Grandparents………Thank you so much Sue x

“Hi Lynn, quite by chance I came upon your web page and was gobsmacked to find photos of my family!
Horace and Kitty Pogmore were my grandparents. I am the daughter of their oldest daughter Kathleen. At the bottom of the page there is a photo of Gran with Auntie Peggy and Auntie Patty. Auntie Patty is Horace’s sister not Kitty’s. (Writing on photo)

Patty and her husband emigrated to the U.S. after World War I. The photo was taken on her first ever trip home in the 50s. Rex Pogmore also came over to visit – possibly at the same time, I can’t remember.
Patty and her husband settled in Buffalo New York. They had three daughters, Olive, Verna and Marcelle.
Rex and Margaret had three children, Sherry and Ian and another daughter. They returned to the UK at the end of the 60s. The girls remained in England but Ian went back to Canada and is here still.
I also live in Canada. I emigrated in 1968.”