This is one of my recent finds from my collection and was the Friday Pic on Twitter and Instagram yesterday.

I had several replies from a lovely gent Chris on Twitter @CLeeEsq so here’s his research into Phyllis…..What a story!

William was called up for military service in April 1918, detained by the civil police for not returning to camp in July. He married Victoria in September before being sent to France.

William was KIA 1918 in France when Phyllis was six months old. Grandmother (second marriage) was FREEMAN.

He wrote his one line will in October and was killed in November aged 19.

William was killed on 4th November 1918, seven days prior to the armistice being signed and the end of hostilities.

The couple had three children two girls and one boy Bernard.

This from BBC RADIO WALES in 2015 on Twitter: 70 years after VJ Day, Roy Noble speaks to Bernard Stogden whose father, as a prisoner of war, left a unique legacy. 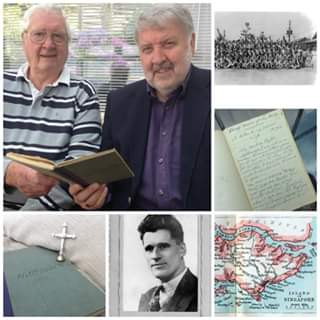 This is the link to the Facebook Facebook Page Radio Interview     but unfortunately as the interview is from 2015 the actual interview doesn’t seem to be working, but I have sent @BBCRadioWales a message so hopefully I will hear back from them.

Hooray! Chris has managed to find an article with the full recording, a wonderful interview, do listen to the full interview, audio and video, the story is so sad, but so very interesting too.

I just hope I can manage to get this photo back to the family, I will update you all.