I came across this small collection of Cabinet Cards at the Antique Bazaar in Crewkerne, good place for a wander, it has many traders under one roof & lots of treasures, antiques & vintage wares to suit everyone.

I haven’t come across many Cabinet Cards of Nuns before, such a shame there was no writing on the back of either, but I assume they are from Salisbury. 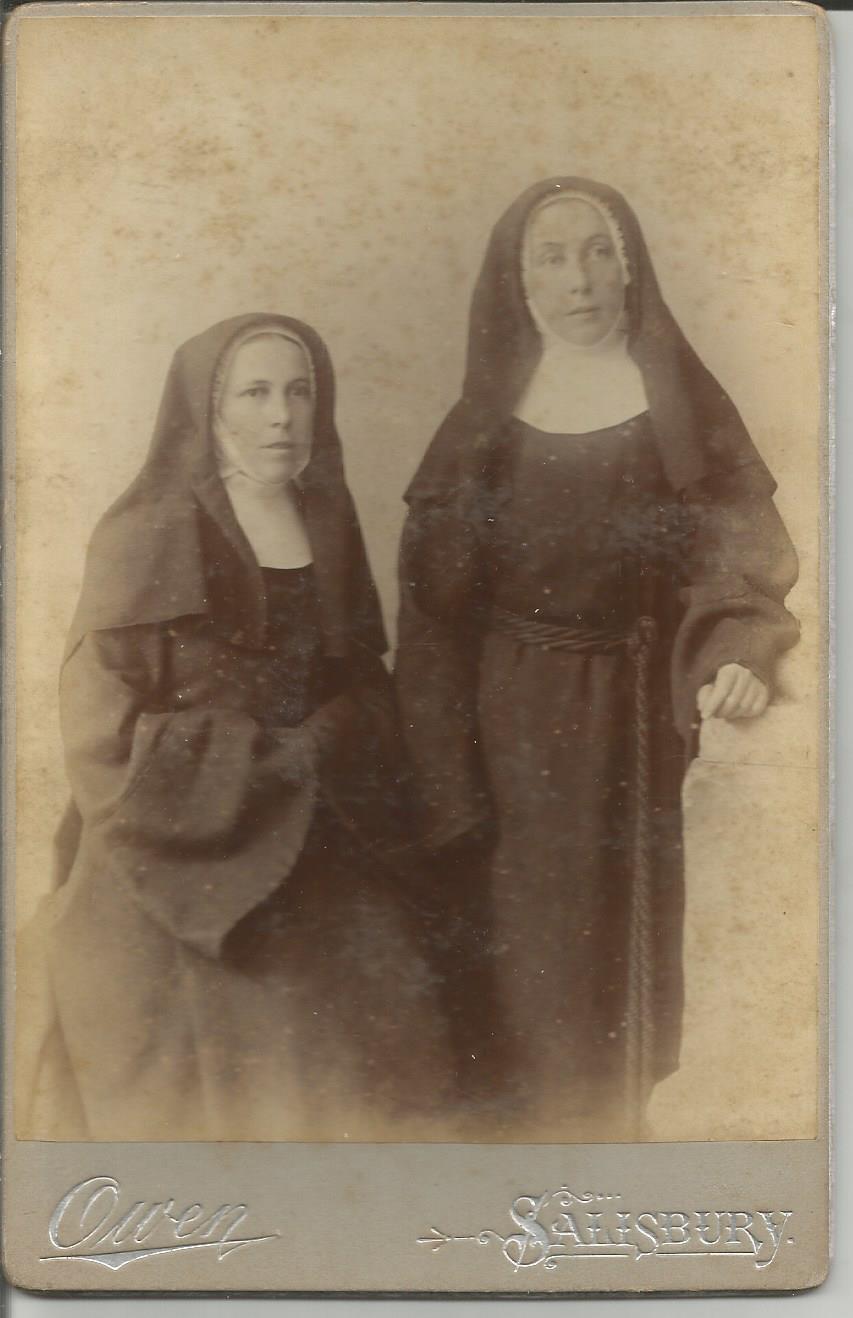 I know nothing about where these Nuns would live in Salisbury, do you recognise the buildings in the image below? Is this Salisbury too?

The Archbishop below is an interesting find too. Just look what someone has written on the back! I have managed to find a link to a super blog by Professor Howard Williams all about Archbishop Benson. Quote “This is what happened in St Deiniol’s Church, Hawarden, Flintshire, to the Archbishop of Canterbury Edward White Benson, aged 67, on Sunday 11th October 1886. Benson had been visiting former prime minister William Ewart Gladstone when he perished from a heart attack during the Sunday service. Upon one of the pillars within the Church there is a photograph and memorial plaque commemorating his (un)lucky fate. This is a rare memorial because it marks the church itself as a site of death and commemorates that fact.”

This is a direct link to the Blog  The Blog of Professor Howard Williams    Interesting reading & more photos! 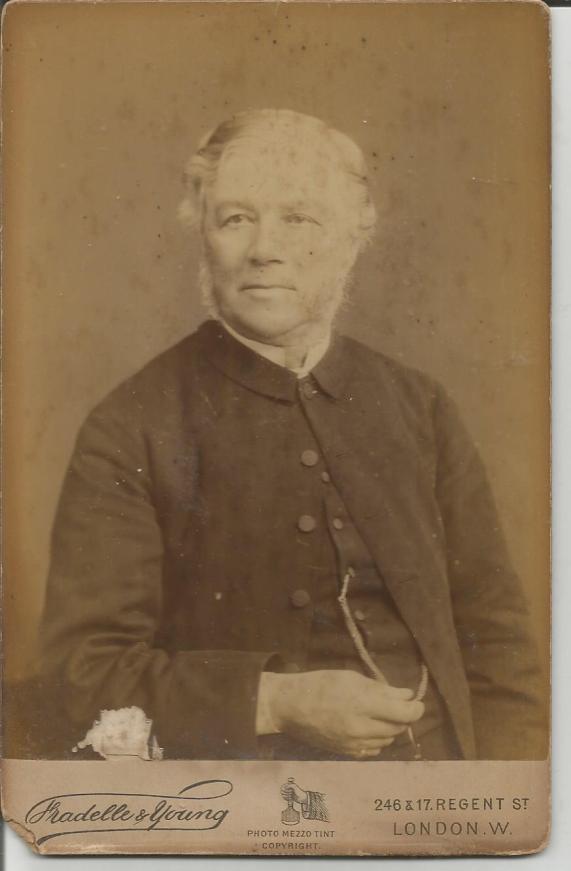 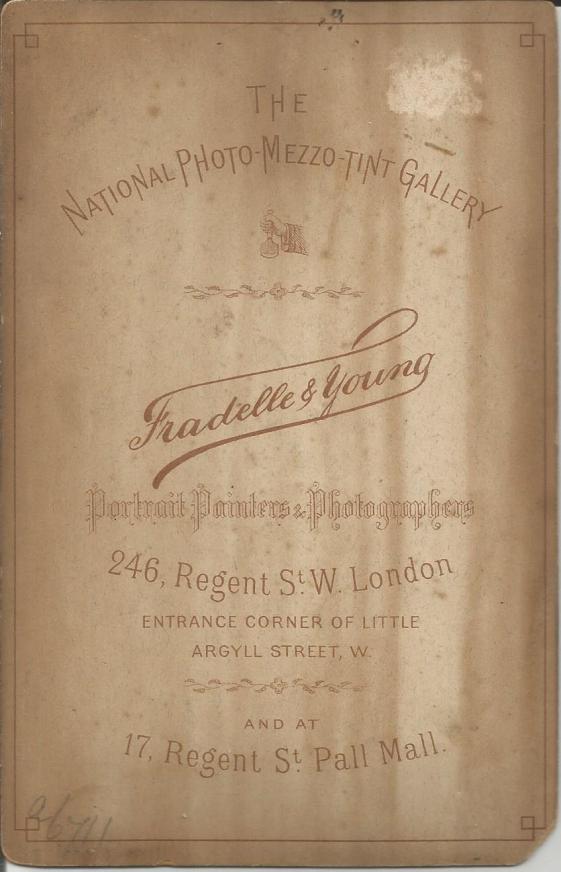 This Cabinet Card above is, I’m sure the same gentleman as named Cabinet Card below. Photo taken around 1887-1897, according to Fradelle & Young photographers details from my London reference book….side by side, image below 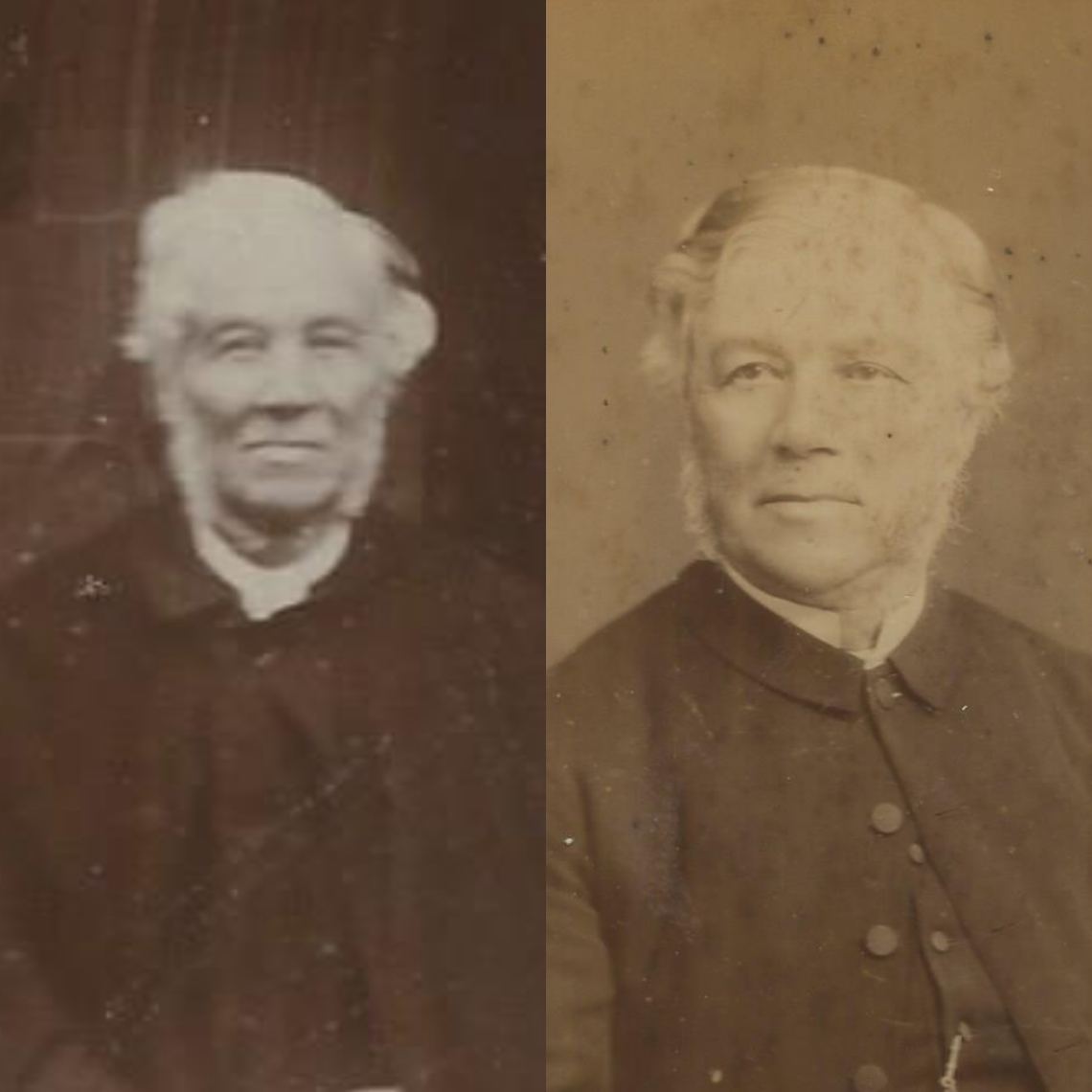 Cabinet Card below taken at an entrance to a Church? 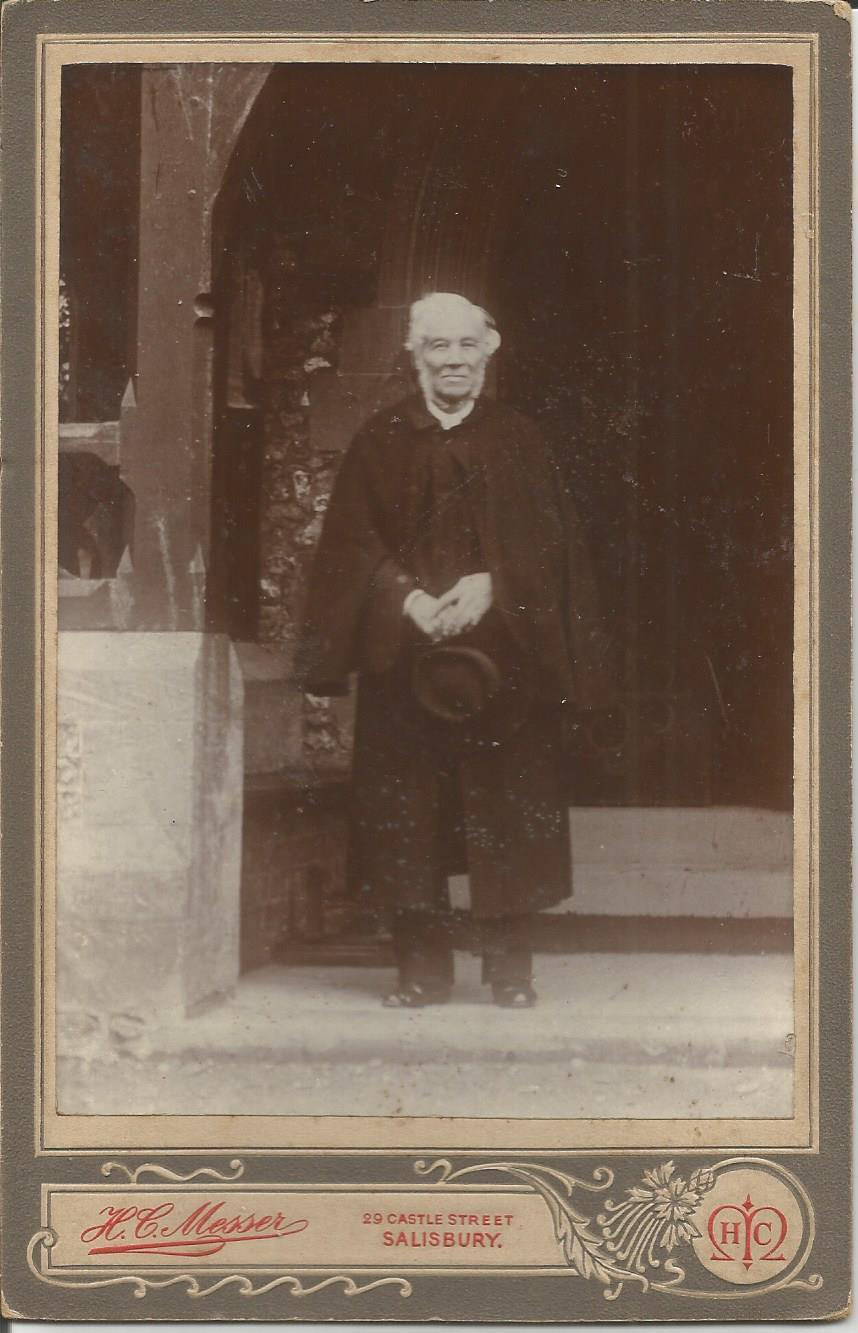 Because this photo was taken at a Salisbury Photographers & I have a lovely friend Steve on Twitter (@Salcathguide) who is a guide at Salisbury Cathedral, I asked him if he could shed any light on my Canon Hutchings. Meanwhile I was searching around Wiltshire & surrounding counties for records myself, and strangely there happened to be a Reverend Hutchings who was once Vicar of Beaminster where I live! The Rev. George Cyril HUTCHINGS M.A. who died in 1950, could they be related?

Steve came back to me after researching at the Cathedral ” I’ve discovered that Canon Hutchings – and there were two – was installed in 1917 and is remarked on in 1950 as one of three long serving Cathedral canons. The other one was Vicar of Alderbury and died in 1910. So they aren’t the same person, but that doesn’t mean that there isn’t a family connection. Curiously, the photo looks like it may have been taken in the porch of Alderbury church, built in the 1850s. But it also might be any one of dozens of other churches. It is not the Cathedral however, or any of the canonries that I can think of.” It certainly helps when you have people ‘in the know’ to lead you on the right path! Here’s a photo below of Alderbury Church entrance & Steve was right they do match up!

So now to go to Alderbury Church records & they have a super website, with loads of information if you are researching the Church records, plus photos! I wish all Churches were like this! In their gallery they actually have the same Cabinet Card photo as I have above. 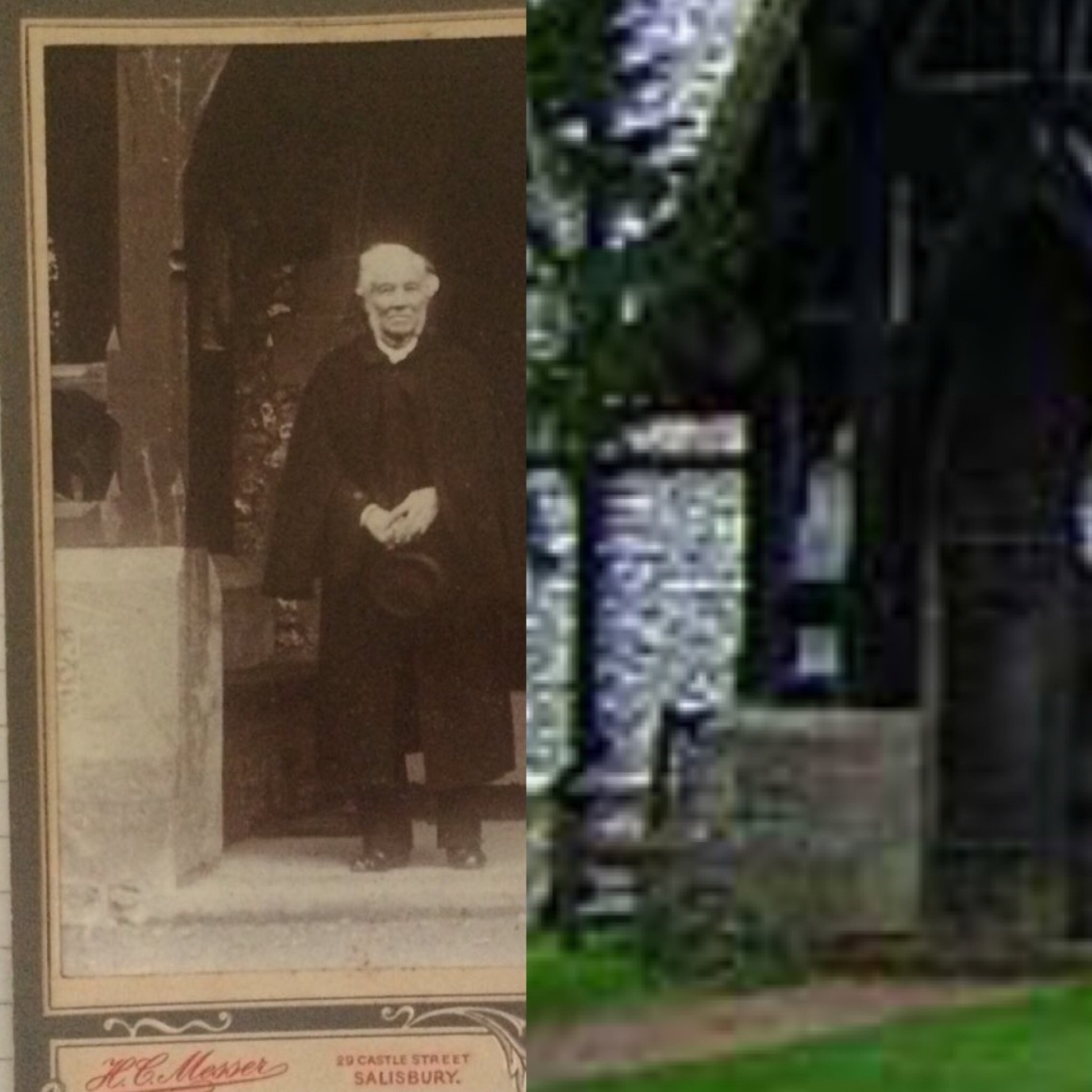 All info below I found on the website of The Parish Church of St. Mary, Alderbury and Whaddon…    St Mary Alderbury and Waddon
Part of the Clarendon Team of Churches

‘Robert Sparke Hutchings was born in Penang in 1819 in the last year of the reign of George III. His grand-daughter, whom he baptised at Alderbury in 1893, was still alive and active in 1988. He was Vicar of Alderbury, Pitton, and Farley until 1874 when Pitton and Farley became a separate parish. He then remained Vicar of Alderbury until his death, aged 90, in 1910. Vicar 1865-1910‘

Yay I found his birth details…..

Steve also suggested looking at Crockfords Clerical Directory, luckily they have records on Ancestry from there & I found him. Firstly the records from the 1908 Directory

Look who else I found too, image above, George Cyril Hutchings, who became the Vicar of Beaminster. Then found George Cyril in the 1932 Directory, below.

I have found that Robert Sparke Hutchings was the very first Vicar of St Andrew’s Church, Monkton Wyld, “the Parish only created in 1850, St Andrew’s church was begun 2 years previous, by the architect RC Carpenter, better known for his restoration of Sherborne Abbey. Mr R.C.Carpenter was hired by Elizabeth Dodson (or Hodson as the church guide spells it) to build the new church, with aide from the Incorporated and Diocesan Church Building Societies. Carpenter was also charged with designing the neighbouring parsonage, school, and schoolmaster’s house. Mrs Hodson named her son-in-law Rev. Robert Sparke Hutchings as the first vicar of Monkton Wyld”        More Information & lots more photos of this beautiful Church from the super website of Britain Express 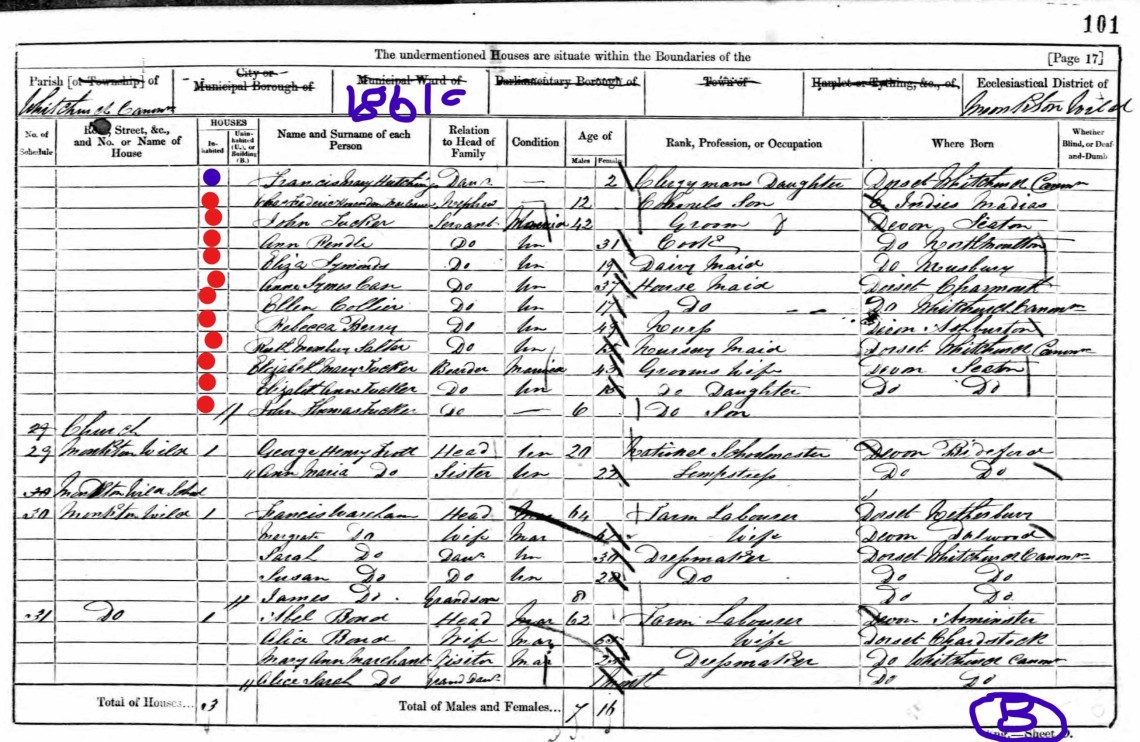 I wonder, are there any descendants of the Hutchings family still living in Alderbury or Beaminster? I shall be making another visit soon to our Local Museum, so hoping I might find out more information about the family.

Thanks so much once again to Steve from Salisbury Cathedral, he’s a mine of information & lovely to follow on Twitter too. Please do get in touch if you have any more information about any of these old photos.

UPDATE: I’ve had a lovely email from Judith in Australia with lots more information.

“Hi Lynn from Australia!
I have been looking for some more details about the above Canon and found your site.
You may be interested to know that during the early days of Young NSW (New South Wales) there was a Dr Arthur Hutchings who was a doctor here. He was the son of Robert S and Frances Hutchings.
Before arriving in Australia Arthur was the resident obstetrician at King’s College London.
He is thought to have arrived in Melbourne Victoria in the early 1970s. He eventually came to Young.
He had a brother called Henry Burdon who was a Civil Engineer in India. Henry however contracted a disease and he came to Young. After several months of
constant medical care Henry died in July 1880. He is buried here in Young. Both men were single
We have magnificent stained glass windows in St John’s church given by his Father. A lovely brass Lectern is also in memory of Henry. Arthur gave the original organ here.
Mayor Arthur Hutchings would only hold the Mayoral Chair position for eight days when he died suddenly!
I thought this might add to your details about the older Canon, the boy’s father. It is interesting to see two Canon Robert Sparke Hutchings but confusing when looking at the Census details!
I enjoyed your site!“