A CDV card with a name and a date !! How brilliant is that !
It makes me want to cheer…that’s one of the rewards of collecting old photos, you never know when you might be lucky enough to come across one with information on.
It makes such a difference, because instead of speculating who, when and what happened to them, you can usually find out.
This lovely baby photo below is one such find……… 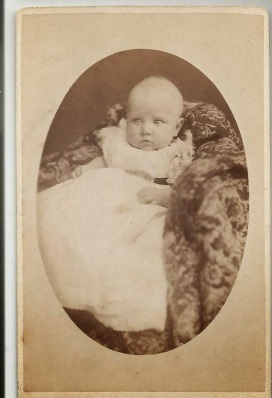 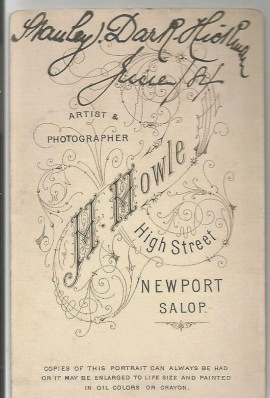 Stanley Dark Hickman was born on the 30th January 1884 in Newport, Shropshire, but not Baptized until 11 September 1892 in Newport, Shropshire.
He was the eldest child of Alfred John Hickman (1859-1937) and Catherine (Dark) Hickman (1859-1949)
Stanley had two siblings Leslie Alfred Dark Hickman born in 1893, and Kate Edith Dark Hickman born in 1899.
In the 1881 census Alfred was a visitor at Catherine’s family home in London, Catherine’s mother being a widow at this time, her husband Benjamin had died in 1872. Catherine had quite a few siblings, some of which were involved in the family business (as her father was) of Cricket Bat and Ball manufacturing. Other ‘Dark’ family members were also living close by in St Johns Wood.
On the 12th April 1883 Alfred and Catherine were married at St Marylebone.
Alfred was a veterinary surgeon, who was born in Middlesex, but after he met and married Catherine, who was born in St Johns Wood… they moved from London to live in Newport, Shropshire.
Which is where you find the family living in the 1891 and 1901 census.
They lived in ‘Bridge House’ St Nicholas’s area of Newport and were obviously doing fairly well as they had a servant on both census.
My next step was to look for more information on the family in the 1911 census, as you do…but nothing !
Then I found that on 13th January 1904 Stanley Dark Hickman aged 20 years old whose occupation was listed as Farmer, had travelled on the ship…………

SS Iconic belonging to Shaw, Savill and Albion Co Ltd to Wellington, New Zealand, it was a 70 day trip then for 474 passengers exclusive of the crew.
On the 18th October 1906, two and a half years later I found Stanley’s brother Leslie and his sister Kate on a ship to Wellington, New Zealand also.
I have searched every page of passenger lists but I cannot find the parents Alfred and Catherine Hickman at all, I am assuming there must be a page missing.
In the New Zealand electoral rolls for 1911 living in Quadrant Road, Onehunga, Auckland, New Zealand, I have found the Hickman family, Alfred working for the government as a Veterinary Surgeon, with wife Catherine and their two younger children, Leslie and Kate. Leslie is now a Carpenter.
The first mention we have in the records of Stanley is living in Rangitikei, Manawatu-Wanganui (not too far from his parents and siblings) and working as a Drover.
Stanley got married in 1915 to Agnes Louisa Morton a New Zealand girl, born in 1893 in April Q in Wellington.
During WW1 both of the Hickman boys, Stanley and Leslie served in the forces for New Zealand.
Stanley was listed as a Sheep Farm Manager at the time.
I have found in the 1949 and after Electoral rolls there is a Donald Dark Hickman living with Agnes Louisa, who could probably be a son to the couple, but have also found two stillborn children born to Hickman over a couple of years just after their marriage. But they may have had other children but without certificates its difficult to tell, as there were a few Hickman families living in the same area before our Hickman family emigrated there.
I am presuming, as I do… that they..all or some of them at least, may have been related.
The family are all listed in the Electoral rolls for the years ahead, 1919, 1928, 1935, often with other Hickman family present at the same address…..
Then on 2nd November 1937 father Alfred John Hickman died aged 77. He is buried in Mangere Cemetery.
The remaining family are all on the 1938 Electoral rolls and on as late as 1946.
Mother Catherine passed away in April 1949 aged 89 years old and sadly later that same year on 9th August our man Stanley Dark Hickman also died aged 64 years.
Leslie Alfred died in 1978 aged 85. I haven’t found a marriage for him.
The last record I can find of Stanley’s sister Kate is in 1981 living at 172 Melrose Road, Roskill, Auckland, she was aged 92 then and still never married. I cannot find her death record, but she had a good innings as they say…..
Stanley’s wife Agnes Louisa died aged 95 on the 20th July 1988.

This is a super picture above of a Drover from New Zealand that I found……amazing where a picture can lead you isn’t it………..