I bought these beautiful old photos at an Antique Fair last month in Devon, they were in a box with others, I bought quite a few from the box & every single one that had writing on, so I may over time be able to add more of the photos to this family Brassey after eliminating others with names. But for the moment these are the only two that I am certain about.

Luckily someone had thought to write some information on the back on two tiny postage stamp size stickers! Was this photo taken just before or just after their mothers death? 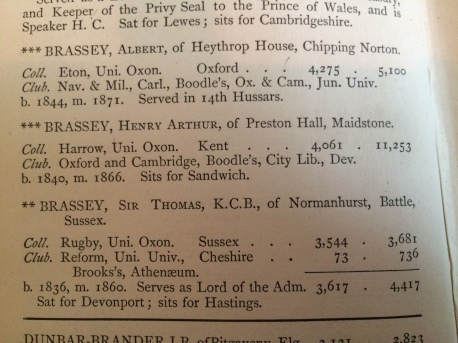 Good to also find the family Brassey in my Great Landowners book! A Car Boot find.

Thomas BRASSEY Lord was born on 11 Feb 1836 in Stafford, Staffordshire, England as the first child of Thomas BRASSEY 1805-1870 (See Above) and Maria Farringdon HARRISON. He had three siblings, namely: John, Henry Arthur, and Albert. He died on 23 Feb 1918 in Mayfair, City of Westminster, Greater London, England.

Thomas BRASSEY Lord was baptized in 1836 Saint Mary,Stafford,Stafford,England. He lived in Mortlake, Surrey, England in 1851 (Relationship: Pupil).
He lived in Oxford, Oxfordshire, England on 30 May 1855.
He lived in Middlesex on 26 Sep 1860 (Marriage to Anna Allnutt. Event Date 26 Sep 1860). Masters and Mates Certificates: 20 Oct 1873
He lived in St Georges Hanover, London, England in 1881 (Marital Status: Married; Relationship to Head: Head. Occupation: M P Civil Lord Of Admiralty).
He departed from River Plate, South America and Brazil in May 1893 (Arrival Date 19 May 1893 Port of Arrival Southampton, England). He arrived in Southampton, England on 19 May 1893.
He arrived in Sydney, New South Wales on 21 Oct 1898.
He departed from Vancouver, Bc Via Victoria, Honolulu, Sena and Well on 21 Oct 1898.
He lived in Catsfield, Sussex, England in 1901 (Relation to Head of House: Head. An astonishing amount of staff employed for Normanhurst.).
He lived in Australia in 1906.
He departed from Sydney, Australia in 1915.
He arrived in London, England on 21 Sep 1915 (Name: Earl Brassey Arrival Age: 79 Birth Date: abt 1836 Port of Departure: Sydney, Australia Arrival Date: 21 Sep 1915 Port of Arrival: London, England).
He died on 23 Feb 1918 & was buried in Feb 1918 in Catsfield, Rother District, East Sussex, England ( St. Laurence Churchyard Burial or Cremation Place, Catsfield, Rother District, East Sussex, England).
His estate was probated on 21 Nov 1918 in London, England.

Anna “Annie” ALLNUTT was born on 07 Oct 1839 in Surrey, England as the first child of John ALLNUTT and Elizabeth Harriet BURNETT. She died on 14 Sep 1887 in At Sea, Brisbane.  Lots of information here below, all from Wikipedia about her.

“The couple had five children together before they travelled aboard their luxury yacht Sunbeam. The yacht was said to have been named after their daughter – Constance Alberta – who was nicknamed Sunbeam; she died of scarlet fever aged four, on 24 January 1873. The golden figurehead of the yacht depicting her is at the National Maritime Museum, Greenwich, London, UK. A Voyage in the Sunbeam, describing their journey round the world in 1876–77 with a complement of 43, including family, friends and crew, ran through many English editions and was translated into at least five other languages. Her accounts of later voyages include Sunshine and Storm in the East (1880); In the Trades, the Tropics, and the Roaring Forties (1885); and The Last Voyage (1889, published posthumously). She had published privately earlier works including A Flight of the Meteor, detailing two cruises in the Mediterranean on their earlier yacht Meteor and A Voyage in the Eothen a description of their travels to Canada and the United States in 1872. She was also involved with the publication of Colonel Henry Stuart-Wortley’s 1882 Tahiti, a Series of Photographs.
In July 1881 King Kalākaua of Hawaii, who had been greatly pleased with her description of his kingdom, was entertained at Normanhurst Castle, and invested Lady Brassey with the Royal Order of Kapiolani.
At home in England, she performed charitable work, largely for the St John Ambulance Association.
Her collection of ethnographic and natural history material was shown in a museum at her husband’s London house until it was moved to Hastings Museum in 1919. There are also several photograph albums and other ephemera held at Hasting Library. However, the vast majority of her photograph albums are now housed in the Huntington Library, San Marino, California. The collection of 70 albums, each containing 72 to 80 thick board pages, is said to be a pre-eminent example of a historical travel album. These albums contain works by Brassey and others she collected, including those of commercial photographers. Brassey herself was an accomplished photographer. She joined the Photographic Society of London (later the Royal Photographic Society) in 1873 and remained a member until her death, and she exhibited some of her work in its exhibitions in 1873 and 1886.
Lady Brassey’s last voyage on the Sunbeam was to India and Australia, undertaken in November 1886 to improve her health. On the way to Mauritius, she died of malaria on 14 September 1887, and was buried at sea“.

Below are just three of the many different mentions of the family in the newspapers & magazines, especially of Lady Brassey after she died. 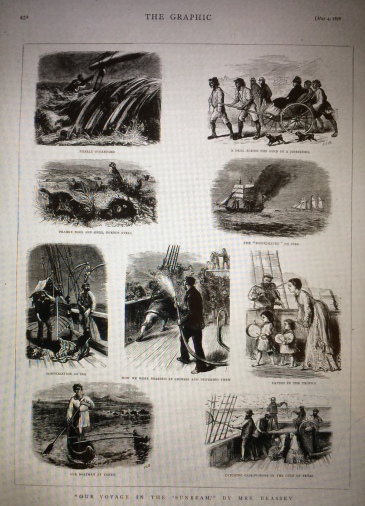 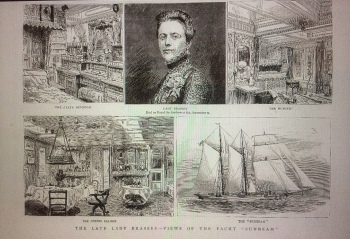 1. Thomas Allnutt BRASSEY was born on 07 Mar 1863 in Beauport, Sussex, England. He died on 12 Nov 1919 in St George Hanover Square, London, England (Was knocked down & run over in Westminster by a Taxi Cab, concussion, they operated but he didn’t recover.). He married Idina Mary NEVILL Lady on 27 Feb 1889 in Ticehurst, Sussex (The couple had no children.).
2. Mabel Annie BRASSEY was born in Apr 1865 in St George, Hanover Square, London, England. She died on 18 Feb 1927 in Funchal, Madeira, Portugal. She married Charles Augustus EGERTON on 17 Apr 1888 in Battle, Sussex. I have found Seven children of the couple.

3. Constance Alberta BRASSEY was born on 18 Feb 1868 in Beauport, Sussex, England. She died on 14 Jan 1873 in England (Constance died of Scarlet Fever) Her parents new Yacht was named after her, see more information below about ‘Sunbeam‘.
4. Muriel Agnes BRASSEY Countess was born in 1872 in London, United Kingdom. She died on 08 Aug 1930 in Kingston, Surrey, England. She married Gilbert George Reginald SACKVILLE in Jul 1891 in St George Hanover Square, London.They had three children,

There is an enormous amount written about the family Brassey in Books and Online, so if you are interested in finding out more you won’t have far to look. Also you will find a Twitter account for @AnnieBrassey that is run by @BexhillMuseum the museum has items collected by Lady Annie Brassey in the 19th Century. Bexhill is a wonderful Museum to have a wander if you are visiting the area, they have a fabulous Fashion History section which I loved! More info here: Bexhill Museum 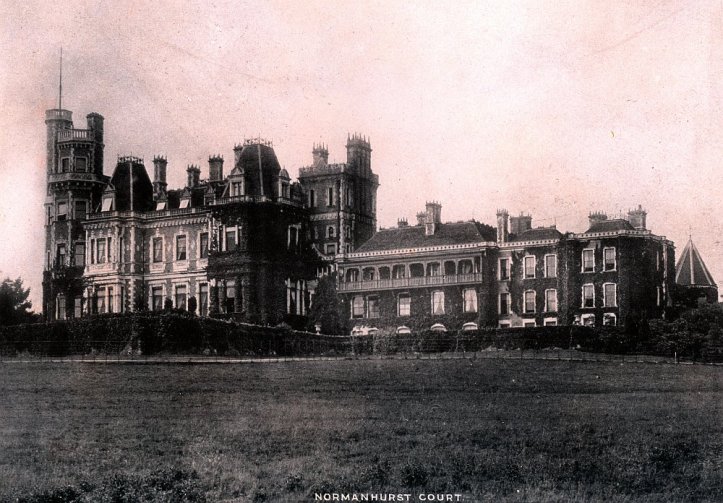 Wow what a home to live in! Sadly no longer standing, demolished in 1951, found this photo on the Twitter account of Annie Brassey run by Bexhill Museum, direct link here:  @AnnieBrassey They share an astonishing amount of photos, items and snippets from books and letters all about the Brassey Family, it’s a wonderful account.

They also had loads of staff, see 1891 Census below and this is excluding the gardening staff etc etc etc:

More information here from the Sea Museum about the family and their travels, a direct link :  Sea Museum

According to the Museum’s website “Gold-painted half-length figurehead of Thomas Brassey’s steam yacht ‘Sunbeam‘ ,1874, representing a female angel, looking upwards and forwards with hands crossed on the breast. It is based on Brassey’ s daughter Constance Alberta, whose nickname was ‘Sunbeam’. Born on 18 February 1868 she died of scarlet fever, aged four, on 24 January 1873 and the 531-ton luxury yacht, launched the following year, commemorates her in both its name and with the figurehead“. Direct link to this item & info at the:  Royal Museums Greenwich