Astonishing sometimes where just one old photo can lead you!
I had thought ah just one Cabinet card (one of 23 I bought together) of a baby with name & birth date, be nice to do a simple quick research, but no! I was amazed to find that her daughter had inherited from a cousin, a very famous National Trust property! One that we had visited & loved!

I only realised a connection with this property in Devon as I was researching May Eugenie’s life and compiling a family tree. I found her will listed and was amazed to see that she had died on 11th June 1979 at A La Ronde! It didn’t take me long to find the connection, much longer to research the family for the family tree I had started, as I have found so many fascinating stories concerning her Ancestors along the way.

The connection to A La Ronde is that May Eugenie Tudor married Dr Alfred Parker on 26 April 1922 and they had two daughters, one of whom Ursula Ruth Parker inherited and became the owner of A La Ronde in 1973, negotiating the change of ownership to the National Trust in 1979. I searched and managed to find and buy an original copy of the very first guide book the National Trust produced for A La Ronde in 1991 just after they became owners, here it explains how Ursula managed to inherit this fabulous property. 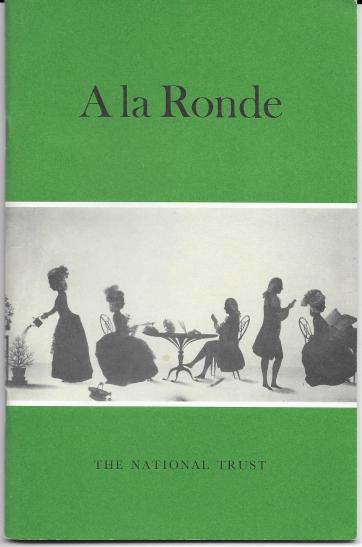 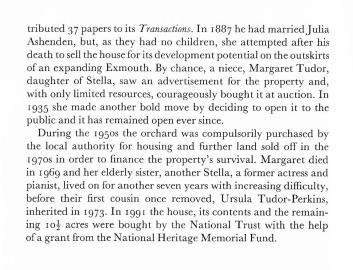 As A La Ronde is not too far from us, easy for a day out (Grand Opening for 2019 is on Saturday 2 February) we decided to go so that I could maybe find out a bit more about this lady May Eugenie Tudor. Funny how even after several visits previously to this property you see so many new things on every visit, it’s a fabulous place. Of course I was also looking for specific connections to the family and my photo.

On arrival I spoke to the lovely lady at the entrance & she called Linda from the office to come & speak with me. I’m glad to say she was very interested in what I had managed to find out so far & loved the photo. Also she very kindly gave me permission to share any photos that I took at A La Ronde on my Blog here, this one below is my favourite! 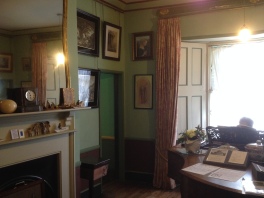 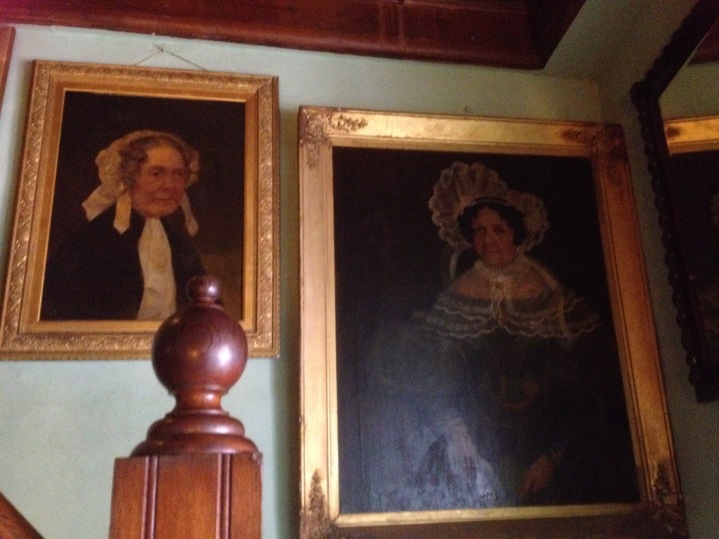 May Eugenie TUDOR was born on 16 Jun 1890 in Winnipeg, Manitoba, Canada as the first child of Rev Hugh Aldersley TUDOR and Eugenie Mathilda FORTIER. She had one sibling,  Alice Ruth Lechmere Tudor, known as Ruth.

When May was 31, she married Dr Alfred PARKER, son of William PARKER, in Jun 1922 in Plomesgate, Suffolk (See GALLERY on Family Tree. The wedding of Dr Alfred Parker (d.1952) and May Tudor at Orford Church, Suffolk. The celebrant was the bride’s father Hugh Aldersley Tudor (1856 – 1939) The couple lived in Grantham, Lincolnshire and May was a big part of the Corby Players, here are some Newspaper reports of performances by them.

May Eugenie died on the 11 Jun 1979 at A La Ronde, Exeter, Devon, England. These photos below are more of the many that I have taken on our visits to A La Ronde.

Husband Alfred died on 16 April 1952 at Grantham Hospital, Lincolnshire and I drew a total blank researching him, through all the records I found only his birth date on the 1939 Register and various mentions of him as a Doctor. Then while searching through the Newspaper archives I found a huge clue on his Obituary! He was born in Northern Ireland! Plus lots more super information about him

But still even after this revelation I couldn’t confirm any parents for him, although I had an idea of which family he did belong to it’s not the same as knowing for sure. So I did what I don’t normally do with my old photos, I sent for Alfred and May’s marriage certificate, which confirmed to me his father’s name and I was so pleased it was the family I had suspected. Alfred was a gentleman farmers son.

Alfred PARKER Dr lived in Maze, Down, Ireland on 31 Mar 1901 (Relation to Head of House: Son. A farmers Son). He lived in Maze, Down, Ireland on 02 Apr 1911 (Relation to Head of House: Son). He served in the military between 1914–1920 (This is one possibility, but NOT confirmed yet! As stated in the obituary, he was in Royal Flying Corps). Alfred Parker Year…..1918, Surname…..Parker, Forenames…..Alfred, Other Information…No more information on the Surgeon Database except…Triple Qualification. This from the Royal College of Surgeons, Edinburgh, Scotland website in 1918 in Edinburgh, Scotland. He lived in University in 1918 (Edinburgh & Glasgow University to become a Doctor. Served in the RAF Medical service WW1).

He departed from Manchester, England on 03 May 1933 (With Wife and two daughters to live in Canada. Stated last permanent residence was Orford Vicarage, Orford, Suffolk (Father in Law was Rector there) ). He lived in Lincolnshire (The Mount, Corby Glen, South Kesteven), England in 1939 (Marital Status: Married. Alfred was a Doctor, Medical Practitioner).

From the Family Tree I have compiled on Ancestry…May Eugenie TUDOR lived in Ward 3, Winnipeg, Manitoba, Canada at the time of 1891 census (Marital Status: Single; Relation to Head of House: Daughter). She arrived in Liverpool, England in 1902, aged 12 with her sister Ruth & her Mother Eugenie Mathilda.

Alfred PARKER Dr and May Eugenie TUDOR had the following children:

Patricia Eugenie Tudor PARKER was born on 17 Jan 1923 in Plomesgate, Suffolk. She married Herbert G NICHOLSON in Mar 1946 in Bourne, Lincolnshire.
Ursula Ruth Tudor PARKER was born in 1926 in Manchester S., Lancashire. She married Peter Henry HARWOOD in Sep 1949 in Bourne, Lincolnshire. She married Anthony PERKINS in Sep 1971 in Windsor, Berkshire. She married Donald L HEFFILL in Oct 1987 in Exeter, Devon, England. These photos below I took of the photos in the wonderful information books available to visitors at A La Ronde, May Eugenie in her senior years with her family, especially daughter Ursula, image bottom right, at A La Ronde. 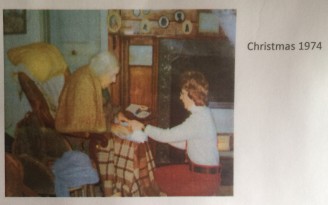 I have tried to make contact with Ursula who I understand to be living in Dorset along the coast, but no luck unfortunately, I would love to have had a chat with her, apparently she is a lovely lady and returns to A La Ronde visiting occasionly, last time was January 2018, she is 93. This below is a quote from her in the Newspaper while she was negotiating the sale of A La Ronde to the National Trust in 1991.

National Trust, A La Ronde    Everything you want to know about visiting this beautiful house, open again at the beginning of February 2019

More about  The Mount, Corby Glen

I have been waiting to post the first Blog about this family until Family Tree Magazine had published their February issue. Link here Family Tree Magazine February Issue as you can see from my copy below, the photos of this family made a wonderful two page spread, I am totally thrilled with it and the lovely Jayne Shrimpton, website link here  Jayne Shrimpton Website  has given me lots of fabulous information about each of these mystery photos connected to the Tudor family, so I’m hoping to match them up with the family tree now, look out for Part 2 next week. 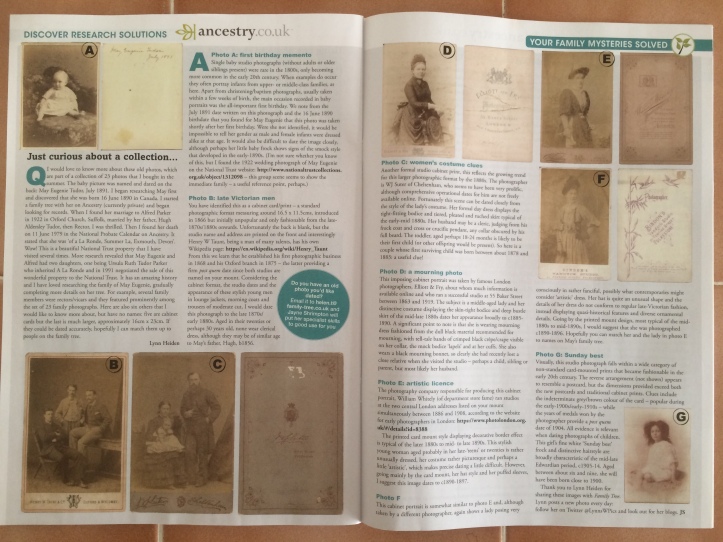 Thanks to Jayne’s information I have found a possible match for this young girl b1900 BUT she was part of the branch of the family living in Canada, of French descent, so now have to see if I can find her on any passenger lists coming over to the UK on a visit, which is highly probable as they were a fairly wealthy family…watch this space!

I have found some other photographs by Swaine (Frank Arthur Swaine 1871-1952) Photographers on the National Portrait Gallery Website in the same era as others at National Trust properties, such as Lanhydrock, Cornwall and Felbrigg, Norfolk, there are similar designs and dates as Jayne suggests taken in the Edwardian period and beyond. He was still active in 1929 at the British Industries Fair: 1929 Listed Exhibitor – British Industries Fair. Specialists in Commercial, Technical, and Flashlight Photography. He certainly was a wonderful photographer.

Frank Arthur Swaine (SWAIN, FRANK ARTHUR BROOKFIELD Order: GRO Reference: 1871 M Quarter in CHICHESTER Volume 02B Page 361) was born in the Chichester area of Sussex in 1871, father Arthur Swaine & Mother Caroline Brookfield. Here he is in the 1911 Census with his widowed Father staying with him & his family at 30 St Andrews Road, Southsea. Frank Arthur Swaine died in 1952 in Findon, Sussex.

I also found this beautiful image of Photographer Frank Arthur Swaine himself with his son Keith taken in 1907 on a public tree on Ancestry, how beautiful.