I came across these four old Birthday postcards at a recent Fleamarket, sadly not with any old photos. But I bought them because I was curious and didn’t have the time to read them, they were all addressed to the same chap Ronald Woodley. Of course when I got home and did read them I had to smile, Ronald certainly attracted a few admirers it seems! Finding Ronald also led me to his interesting family….

This first one above was handy because it gives us his year of birth 1911, and looking at the postmarks we can assume it was October of 1911. Just after the census of 1911 but good for the 1939 Register. I found him fairly easily with his family at Chapelhaies Farm, Bradninch, Devon. Here below are some past & present photos of Bradninch, Devon. Top left was taken in 1936, then a view of the village, the farm is not too far from the village, then the Church of St Disen’s, Bradninch.

Below is the 1939 Register from Find My Past, on it marked in purple are the Woodley Family, including Ronald. Then above marked green are the Baker Family, I assume the owners of the Farm as their name is first. I have looked up the Farm and it seems it is still being run by a family of the name Baker, A.L.Baker & Son, so highly likely to be the descendants of these Baker’s. 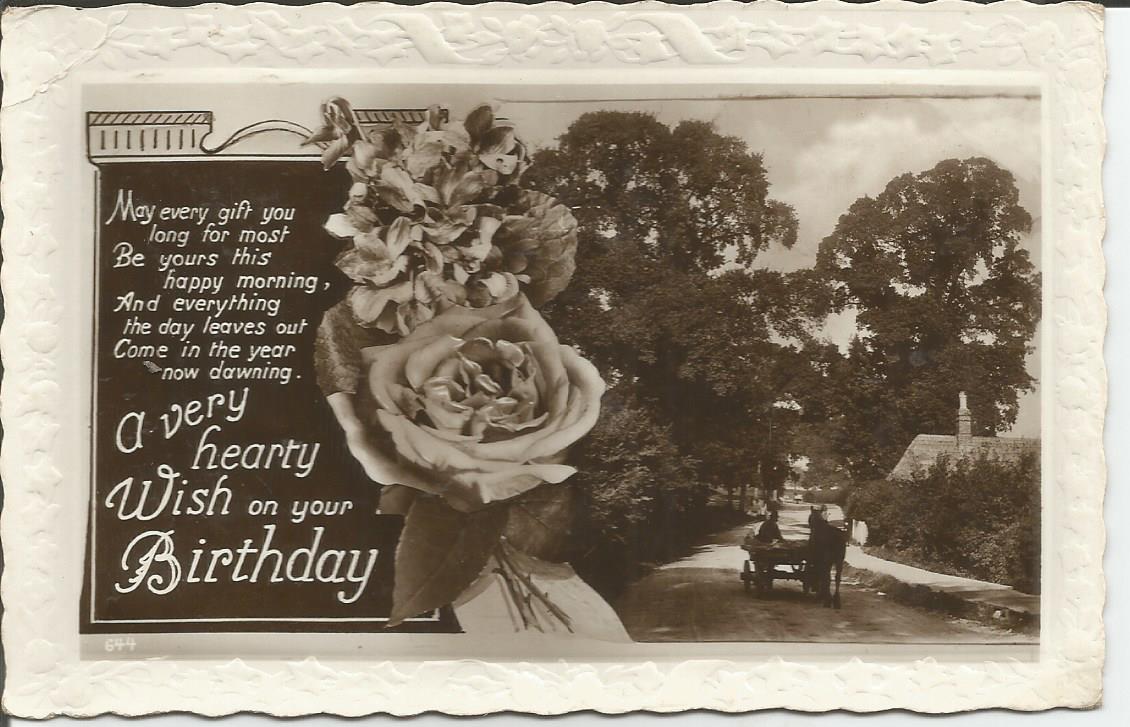 Knowing the name and birth dates of Ronald’s parents now, John Peter and Georgina Woodley (nee Ireland) I found them on the 1911 Census, just before Ronald was born with their six children and Dad John Peter Woodley was an Innkeeper at the Talaton Inn, near Ottery St Mary, Devon, a beautiful 16th Century Pub that is still going today…

I was lucky to find these reports below in the newspaper archives, which answered some of my questions I had during my research into the Talaton Inn, and the different families of Ireland & Woodley’s  involvement. 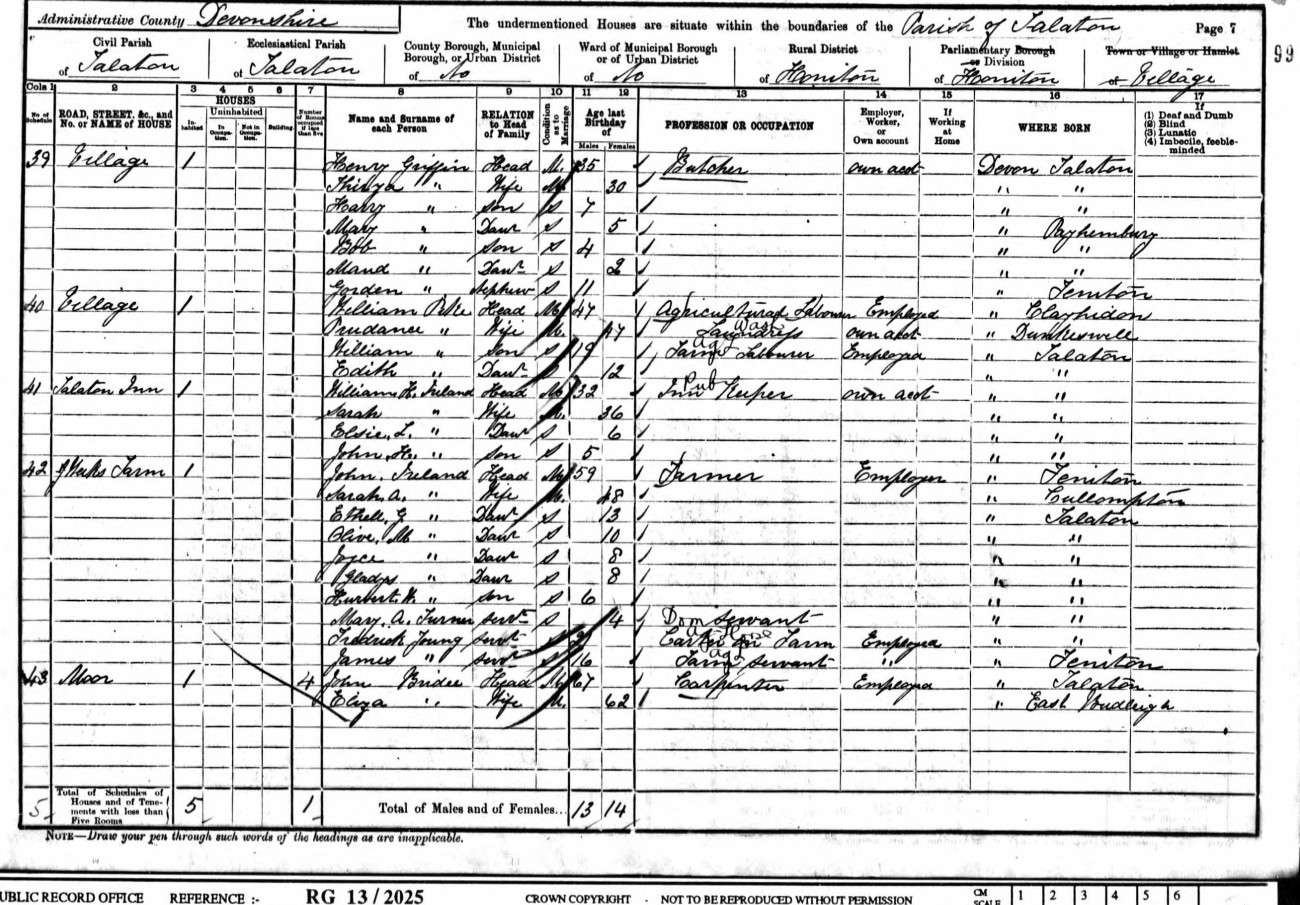 William Ireland Landlord before his death, with John & Sarah Ireland next door at the Farm 1901 Census

Georgina’s parents John and Sarah Ann Ireland later were at Millers Farm, Talaton where they both died, John on 25 Dec 1928 and Sarah Ann a few months later on 10 April 1929.

I wonder how long John Peter Woodley ran the pub for? I found where just a few months after taking on the Pub he was charged 15s for allowing his wife to serve a 14 year old girl with intoxicating liquer in a bottle with no lid! A steep learning curve for him I suspect! He is described in other reports of being  “formerly of Plymtree, Innkeeper, Farmer, reaping machine proprietor, and pig dealer formerly a Baker”

This may answer my questions. I have found a report in the newpaper archives of one of the Woodley family being accidently killed by a Motor Car while he was on his bike very close to the Talaton Inn, see images below...Was this the reason the family left the pub? we’ll probably never know. This is just one newspaper clipping, there were many covering thew same event & also the full inquest details. The Newspaper Archives are a fantastic resource for family history as always, I access through Find My Past. 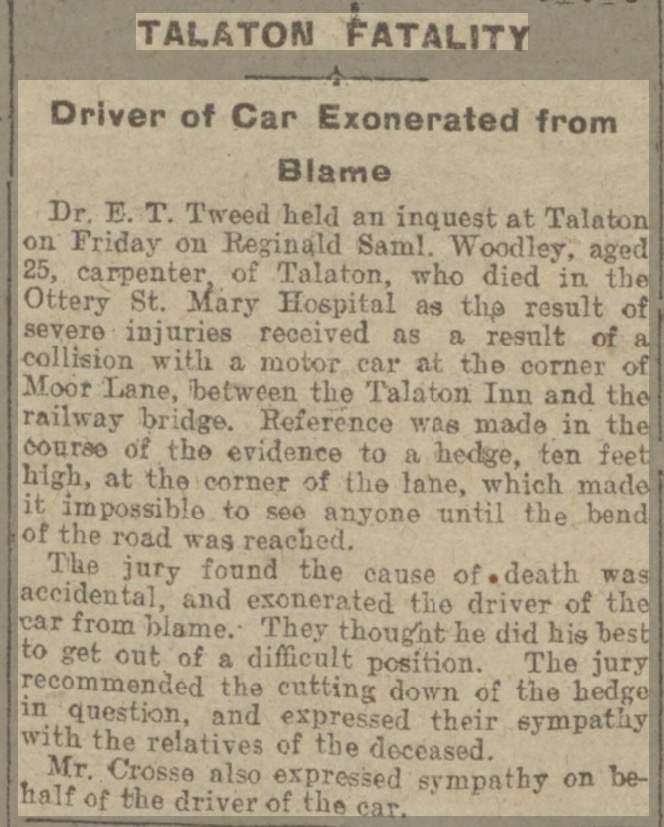 Tragedy close to the Talaton Inn in May 1919

I found that Ronald’s father John Peter had died in 1951, this is John Peter Woodley’s will leaving money to his two eldest sons, also here is a photo of the gravestone memorial to Ronald’s parents in St Dionysius Churchyard, Bradninch, found on Find A Grave.

This is the Talaton Inn in more recent times… 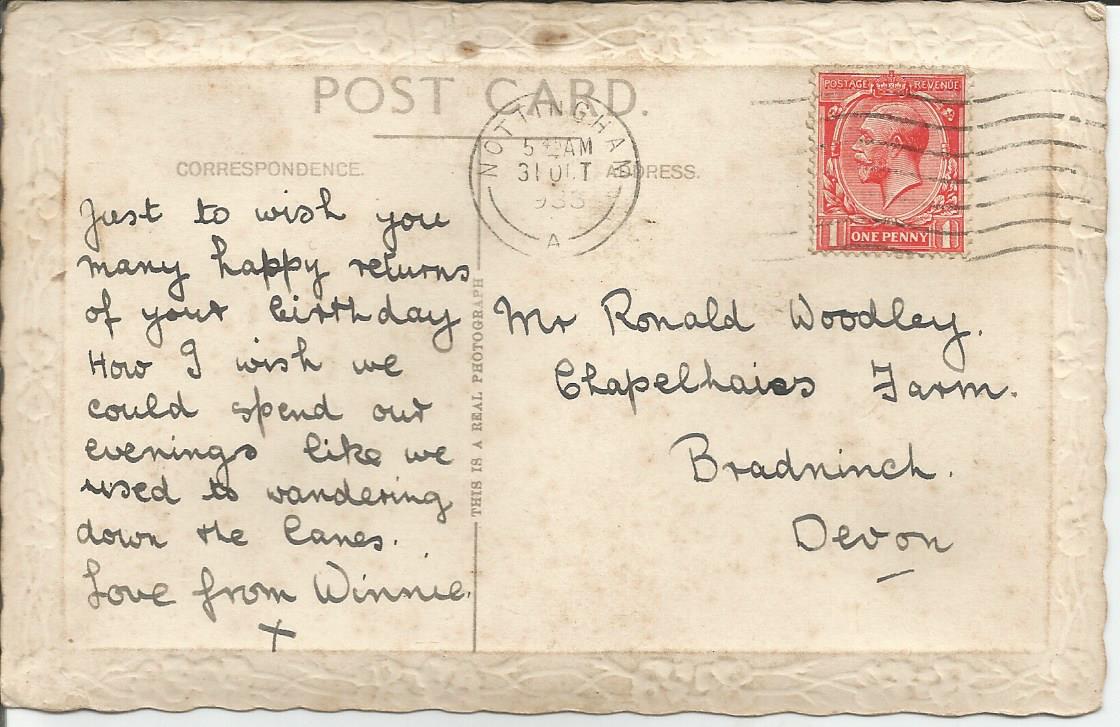 After the interesting family diversion, back to the Postcards…..

So we have admirers Medee, Jeannie, Winnie and Gwen….Did Ronald marry any of them? Well no, he actually married a lady called Ivy Heaman in Tiverton late in 1941. I have not found any probable children of the couple. In their later years together they lived in Exeter, Ronald died on 13 Jan 2002 in his ninetieth year, then I found that Ivy after his death went into a care home in Exeter. I am assuming she passed away there on 27 Nov 2008, she was born in 1910. They are both laid to rest in Bradninch Cemetery, with a lot of the Woodley family close by in the local churchyard. He must have found the right one to marry after all. 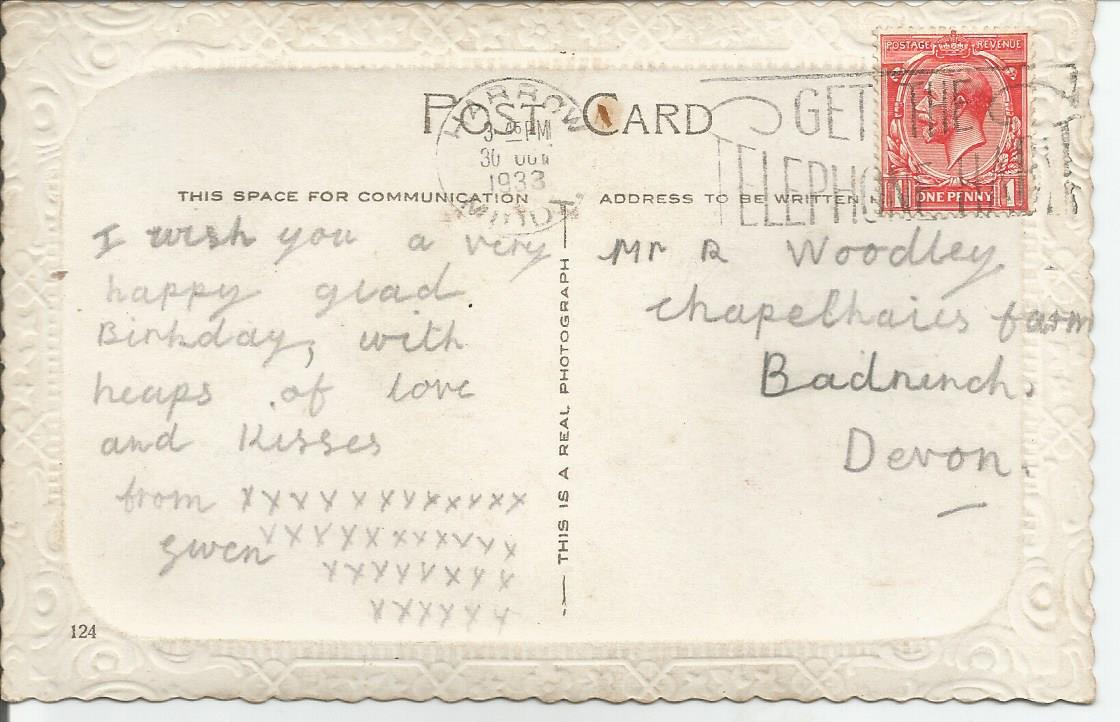 If you know of anyone in the Woodley Family who would like these Birthday postcards do get in touch….