UPDATE. Over the last week I have had correspondence from Barney Murphy’s family, which has resulted in these super photos now being returned to their family! Another great result! Here’s a bit more info from the family they have kindly said I can share with you all.

“Bernard (Barney) Murphy, the music hall artiste. He was our great-uncle, his brother James Aiden was our grandfather.
We found my images of our great uncle Barney.
Our dad (born in 1915) and his younger sister Mary (born in 1914) were looked after by Uncle Barney and his wife ( Bessie who he married in 1915)( see my public family tree, link below on this blog) while young children. Their mother had died of TB (in 1921) and their father farmed them out to Barney.
Our dad looked back on the time they spent with them with fond memories They travelled all over the country with them as Barney toured the music halls.The one tale they used to tell was being left to look after themselves one day in a boarding house. They went into the kitchen and took all the bacon from the larder and used it to slide across the stone flagstones!” Great story!
One of the brothers has been researching their family history, and found my blog, how wonderful! 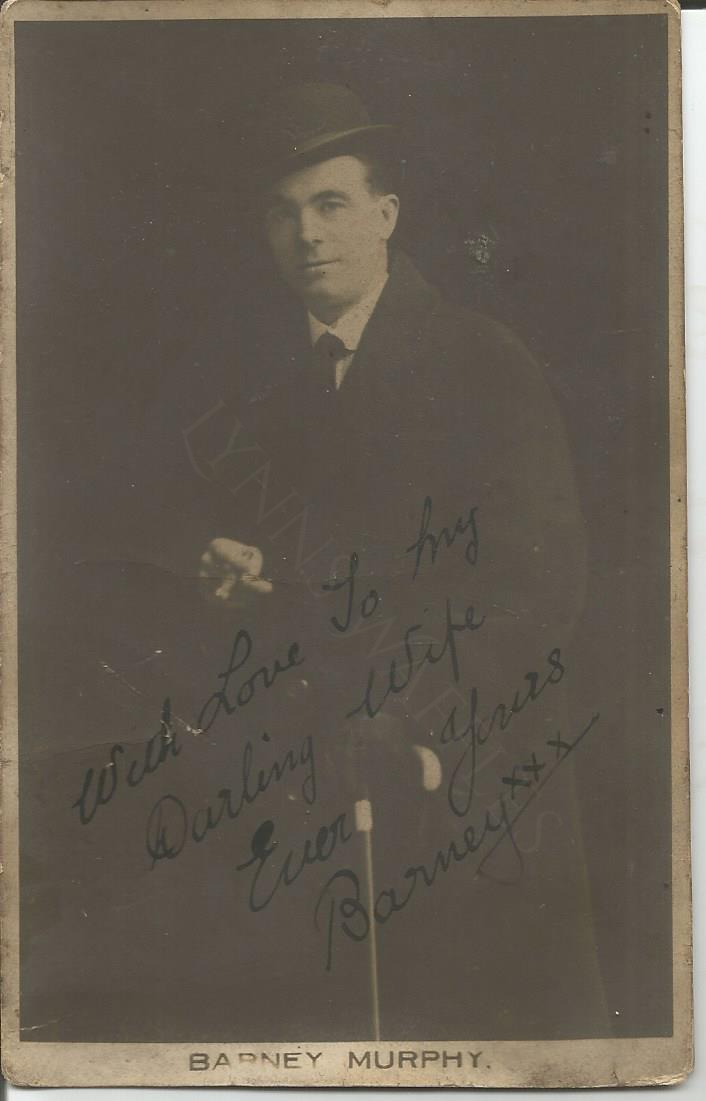 There is no writing on any of the backs, just the Postcard photographers area, some are Liverpool & others Southsea. 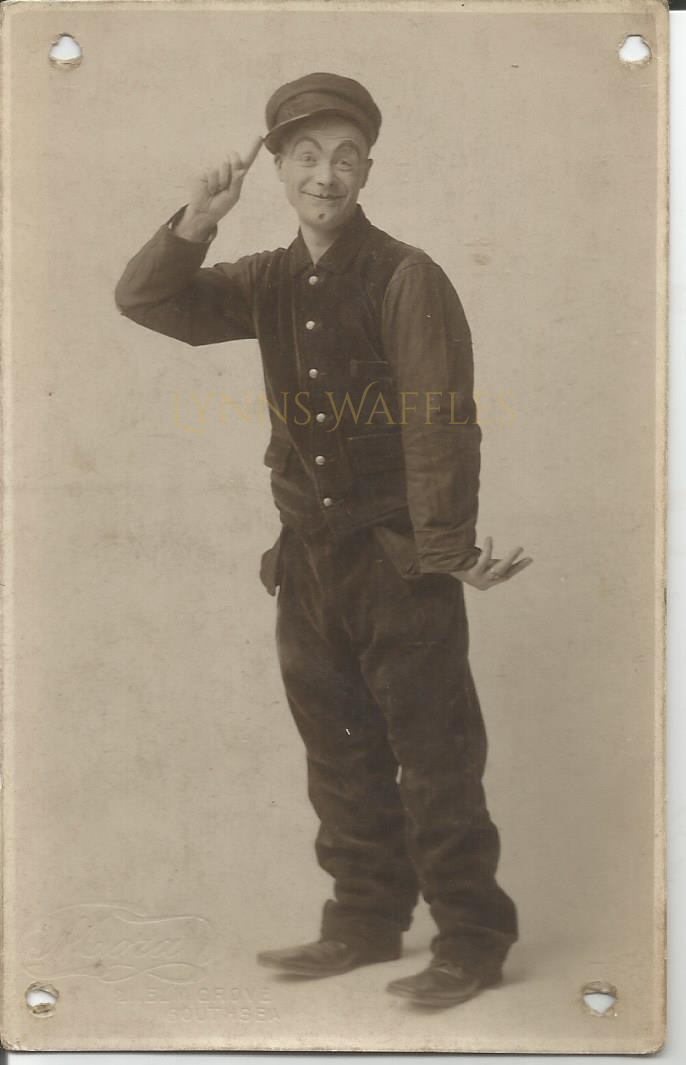 I wanted to find out about the real Barney Murphy, so I started as always putting his name into Ancestry, Find My Past & Family search, but I didn’t find anything I was happy with, apart from on the Newspaper Archives on Find My Past, there were lots & lots of mentions between 1914 & 1933! Here are just a few… 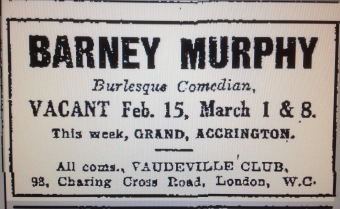 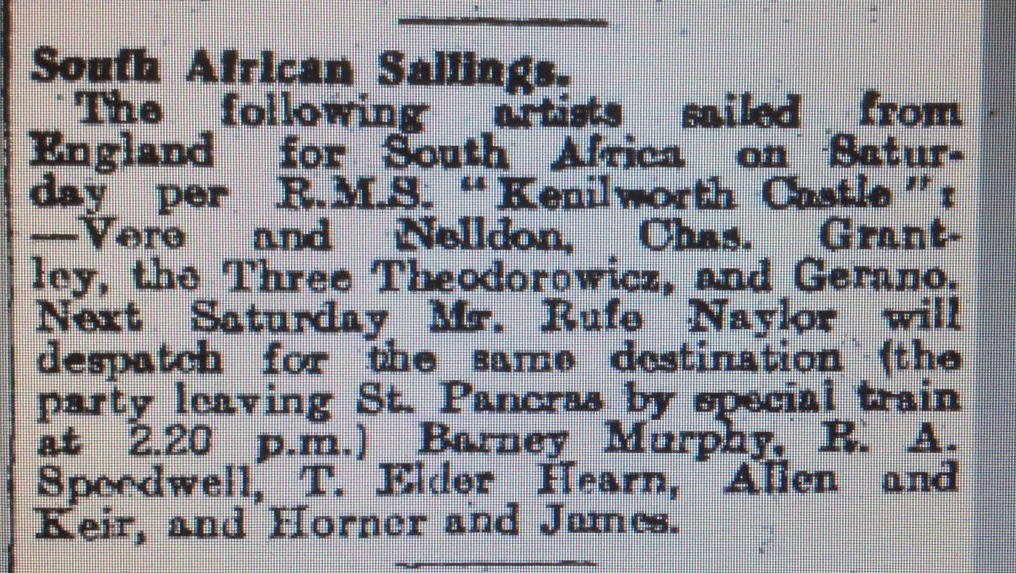 But I still needed some personal information, I didn’t even know what year he was born. The last mention here above on the right about the company of entertainers sailing to South Africa helped me enormously, because I managed to find them in the travel records for 24th April 1915, which was the Saturday before the article on Thursday 29th.

This document above gave me his age 28! Mr B Murphy last but one.

So now I knew he was born in 1887, but was Barney Murphy just his stage name? The name Barney is short for Bernard so I thought I would look first in the 1939 Register, if he was anywhere on there I would at least see if he was still alive, any family or who knows what else. My goodness I was so very lucky, indeed he was Bernard Murphy born on 15 February 1887. Living in Westminster, London, a widower, occupation a Music Hall Comedian. See photo below, purple dots….So now I knew his name & that he had been married, I could add to my Family Tree for him.

I was surprised & saddened by what I found. Bernard married a Florence Isabella Moody at St Andrews Church, Newcastle on 15 July 1908, (records say Florence Gertrude, incorrect, but Florence had a sister Gertrude, so I assume a mistake was made at the time) they had a daughter Ellen in Jan 1909 & a son Thomas in July 1910. Then tragically I found that Ellen had died in the October of 1910. The family are together as visitors in 1911 in Oldham, Lancashire. Barney is described as a Music Hall Artist, so had just started his journey. Then I found that his wife Florence had also died in July 1913.  I have searched for what happened to his son Thomas, but there are so many possibilities as the name is so common.

Dressed as a Train Guard?

I have lots of questions unanswered, Did Barney marry again, I have found at least one possibility. What happened to Thomas? Did he die young? Did another family member bring him up? I am sure that these tragic events in his life led him to really pursue his ambition of being an entertainer, he had nothing to lose & the Newspaper clippings start after 1913. He didn’t have a home to support so just gave it his all. Even if Thomas was being looked after by another family at least Barney would have been able to provide for him.

Dressed as a Policeman do you think?

He travelled all over Britain & some revues also I found in Ireland. As we know he went to South Africa too & probably other Countries abroad.

Everyone loves a clown!

But that wonderful beaming smile hides such a very sad private life……..

This Postcard above is fabulous, advertising BASS beer & Barney, not only for the comedy but for the date! Just down on the left by the little dog G.Cooke, Blackpool, 1913.

This below is one of the last mentions of Barney Murphy in the papers in 1933, performing in Dover, Kent.

Slowly adding his family to the tree I found that his father Thomas died in 1908 & was in his will stated as a Travelling Showman! Although I found he had many jobs, labourer, shopkeeper etc I would imagine that he would loved to have been on the stage full time as Barney was, maybe that’s just one of the reasons that spurred Barney on.

I don’t think one of these ladies below is his wife Florence as it looks later than 1913, so maybe a family member. The lady standing does look similar to Barney, so a sister maybe?

Could one of these lovely ladies be Barney’s sister?

I found three possibilities of a death for Bernard Murphy 1. 1943 Hendon, Middlesex. 2. 1944 in Howden, Yorkshire & 3. 1968 in Ormskirk, Lancashire. But of course unless I order certificates I will never know. I just hope that he found happiness.

The last Postcard Photo of Barney is taken as quite a debonair young man.

If anyone knows or can find any more information about this family I would love to know! Especially what happened to Barney & Florence’s son Thomas.