On Wednesday the 1st January 2014, on our way home from a few days away in the Motorhome at Devizes, we made our first visit ever to the Lost Village of Imber, on Salisbury Plain, Wiltshire.
This village is open for a few days every year and we just never seem to have got to go before. 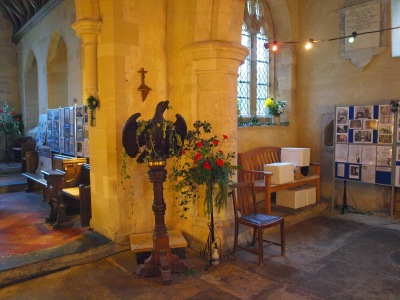 The day started off with rain and continued with rain !! Not the best conditions for a visit, but the Church and its friends couldn’t have been more welcoming. The Church itself was warm and beautifully decorated for Christmas, the Bellringers were ringing the Bells and the lovely friends of the Church were serving nice cups of tea ! It was a brilliant visit, we loved it.

Inside the Church as you can see from the pictures I took, there are lots of information boards telling the story of Imber then and now, with lots of very old pictures of the original village and its people. There are also very interesting Boards telling you about the Wildlife that lives in and around Imber and on Salisbury Plain and the Conservation work that is going on there.

While I was doing my research about Imber for writing this Blog, I came across a brilliant site called Geograph where I found lots more pictures about Imber (plus more places around the UK)
The site also had some good research and writing about Imber Church by Brian Robert Marshall, which I have copied below with his kind permission. Also some of the Pictures that he and others have taken, I have put on my Pinterest Board from this site, again with Brian’s kind permission. Some of the pictures are great because as it was pouring with rain on our visit and wet and muddy, I wasn’t able to take as many as I wanted or go exploring as much. 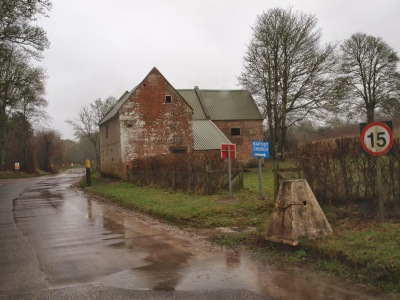 We are going to try and go back in better weather in the Summer, Brian has told me that often the village is open during August..see link below Imber Friends.
LOTS MORE PICTURES HERE ON MY SPECIAL
IMBER Church and Village Pinterest Board

The church is on the site of an earlier mid 12th century building. The church as seen today is the result of building work carried out in the 13th and 15th centuries, and restorations dating from 1849 and 1895. It continued to serve its parishioners until 1943 when the entire village was depopulated to aid the war effort. The villagers were never allowed back and the village today is, most of the time, used for military training. An unusual feature of the exterior is the top of the tower which has five pinnacles.
Many of the interior fittings have been removed to other churches. The font is now in Brixton Deverill, whilst the altar, communion rails and some pews are in Bratton, Other pews made it as far as Churchdown in Gloucestershire. The interior still has much of interest.
The church is listed Grade I….
full details here.. Listed building Info
From 1943 until 2002 the church was maintained by the War Department and its successor the Ministry of Defence. Following being declared redundant, the church passed into the care of the Churches Conservation Trust in 2005. Much work spanning the years 2005 to 2009 has been carried out to conserve the building and its features.
The church remains consecrated as a place of worship and services are held on certain days each year.
~~~~~~~~~~~~~~~~~~~
The Wiltshire Times wrote a piece about the new Bells in February 2011
A week before Christmas 1943 the isolated village tucked deep in the folds of Salisbury Plain was requisitioned by the War Office. Villagers were told at the beginning of November that they had to pack up everything and leave.
The villagers, praised for the sacrifice they were making towards the war effort, were promised that their village would be returned to them after the Second World War.
With the Church building (St Giles) gradually falling into decline the Friends of Imber campaigned for its renovation.
After lengthy negotiations, the Government and the Church of England agreed to the facelift and at the beginning of 2007, under the control of the Churches Conservation Trust, the £200,000 restoration project began. Recently six new bells were installed and the peal rung for the first time in 60 years.

Lots of people have written so much about this lost village on the internet, my best advice is if you are interested is to go and pay a visit yourself…..its free……and well worth taking the time to go….especially the Church of St Giles. Next opening time is Easter, for all up to date information about Imber Village and Church…. Click here   IMBER Friends