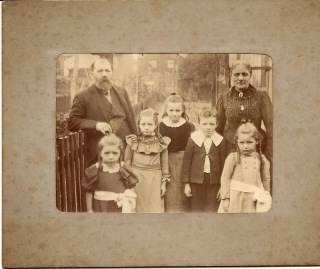 I came upon this picture above at a  local Car Boot sale in November with 5 or 6 others, and it wasn’t until I sat down later in the afternoon to have a look at my finds from the morning, that I realized on turning it over that all the Childrens full names were written on the back, with their ages and the date the photo was taken !! I was over the moon, not very often that happens !

So the research began and here’s what I have found out about this family…..
Parents names were William John Hawkins (b.Liverpool) and Elizabeth Dymott (b.East Cowes,Isle of Wight) who married in the last quarter of 1887 in Southampton, Hampshire.
1) Margaret Elizabeth Hawkins, the eldest child was born 9th March 1890 in Newcastle upon Tyne, Northumberland. She was Christened at St Peters Church in Liverpool on 27 June 1890. By the time of the 1891 Census the family had moved down south to live with Margaret’s Grandparents (Elizabeth’s parents) (Richard and Elizabeth Dymott) in Spear Road, Southampton.
At the beginning of 1892 Elizabeth gave birth to Twins
2) Alice Caroline Dymott and
3) Cecil Joseph Richard both births registered at South Stoneham, Hampshire
4) Ethel Minnie Hilda was next,in the 3rd quarter of 1893, another daughter, again registered South Stoneham, Hampshire
5) Edith May Eleanor The last child, another girl front left of photo, born on the 5th October 1894
Mother..Elizabeth Dymott was born in 1854 on the Isle of Wight, East Cowes to Richard Reeks Dymott (1827-5th Oct 1897) and Elizabeth Pope (1824-1909) Richard was a Carpenter Joiner, as was his father John before him, Richard’s mothers name was Joanna.
Both Richard and Elizabeth Pope were born in Poole, Dorset, and married in the Poole Parish Church St James on 26th January 1853. Elizabeth’s father John Pope was a Mariner.
Richard Reeks Dymott, when he died left £38-18s to his widow, they lived in Spear Road, Southampton, Hampshire.
Father..William John Hawkins was born in 1848 in Liverpool, Lancashire to Joseph Bennett Hawkins a printer (1820 Liverpool-1860 Liverpool) and Margaret Wilson (1820 Liverpool-1890 West Derby)  He had a brother Alfred and a sister Alice Caroline. I have found a record dated 27th December 1870 of a William John Hawkins being a Second Mate in the Merchant services..see below.. and I do wonder if this is how William John and Elizabeth met, as she lived in Southampton, maybe he travelled there ?

Joseph Bennett Hawkins and Margaret Wilson had married in 1846. Joseph Bennett’s father William was an Officer in HMC and Margaret’s father John was a Wine Merchant, her mothers name was Mary Ann Bickerstaff, and they had married on 10th August 1817 at St Nicholas Church, Liverpool.
Margaret Wilson also had a brother called John, who inherited from his father in 1863 and it was on his Will that John (The Son) was a Manager of a Steam Tug Company in Liverpool.
In 1901 this Hawkins family lived in Earls Road, Southampton, the road backing onto Spears Road where Elizabeth’s parents seemed to live most of their married lives at different numbers, so I do think that probably the picture was taken in one or the other gardens in Southampton.
William John Hawkins was a Wood Sawyer/Machinist in 1901/1911 at a Joinery works, he died in 1919 age 70. Elizabeth died in 1940 aged 85.
What happened to the Children ?
1) Margaret Elizabeth in the 1911 Census was working at Brockenhurst Park, New Forest, Hampshire as an Under Nurse. There seemed to be a lot of staff employed within the estate, it was a fantastic country House, that sadly was demolished in the 1960’s and a newer version built, they hold weddings/horse shows there now.

Also in Brockenhurst in 1911 was a young man called Edwin Leonard Elford who was born in Lymington in 1882, working as a Chauffeur, they met and married in 1915 in Southampton. I haven’t been able to find any children born to the couple, but I did find a Post Office record of Edwin being appointed in 1925.
Edwin died on 22 June 1965 just after they had celebrated 50 years of marriage, Margaret Elizabeth herself died in June 1973 still in Southampton.
2) Alice Caroline Dymott Hawkins, never married but died in 1967 in Winchester, Hampshire. I found no other records online concerning her at all.
3) Cecil Joseph Richard married Elsie Winifred White (born 26 May 1891)  in 1920 in Southampton, Hampshire, I have found no conclusive proof online of any Children born. Cecil died on 19th March 1948 at home in Testwood Lane, Totton, Southampton, Hampshire leaving £1026 1s 6d to his widow. Elsie herself died in March 1974, still in Southampton.
4) Ethel Minnie Hilda married Ernest E Marsh in 1913 in Christchurch, Dorset. There are no conclusive records of any Children and there are several possible death dates for Ethel and Ernest, but nothing definate.
5) Edith May Eleanor was another one of these children who didn’t marry, I have found her death record in April 1987 in Southampton, Hampshire aged 92. I found one record on Find My Past that might relate to this Edith May

Did she become a Teacher ?? I wonder…….
Again because I only rely on records that I can access online for my research into these pictures, I cannot find any other clues about her life.

I still find it quite amazing that just because of a few names we can find out so much about a their lives and Ancestors from the comfort of our own homes, we are very very lucky. There is lots more online about this family and the generations before, if you know the family or someone who is descended from them I will be more than happy to return the photo to where it belongs.