I am still catching up on scanning of the old photos that I have acquired this summer, lots of them are CDV cards, they are time consuming because I always scan the backs too. Some of the Photographers had wonderful designs, especially if they lived & worked in a special town or city. This is one such card, although an early one, it has a beautiful design on the back, a drawing of Salisbury Cathedral. I posted it on my Twitter, as I have a lovely follower who has links in Salisbury & especially the Cathedral, I knew he would enjoy seeing it. I thought I would also try & find out a bit about the Photographer ‘Rogers’ of The Close, Salisbury.

After a bit of searching I have found a Mr Edmund Rogers in the 1871 Census, a Photographer in the The Close, Salisbury.

BHO is a super site, with amazing info….

Edmund is described as a Wood & General Turner here. So obviously made the change to Photographer between 1861 & 1871. In the 1851 Census I found him & Marianne with no children both aged 23, so I guessed not long married. Edmund was an Ivory & Wood Turner in this Census & Marianne was a School Mistress (Bottom 2 lines of image below) They were still living in Salisbury back then, described as in the Parish of St Thomas, New Sarum.

I was looking for their marriage date & suspected as it had said on 2 of the children’s Christening records Mother name  ‘Mary Ann’ not Maryannie/Mariannie/Marianna or other permutations. So I tried that first & came up trumps ! Her name was indeed Mary Ann & surname Bolland..which had also been transcribed incorrectly as Rolland on Ancestry (I have corrected) but Find My Past had the name correct, but no image of the actual marriage certificate like Ancestry. So glad I am lucky enough to have both to use. Edmund’s occupation was a Turner then.

They got married on the 2nd January 1851 (Which was actually Edmund’s 23rd birthday) in Gillingham, Dorset. Not far from where we used to live in Shaftesbury. Looking through Baptisms available I was lucky enough to find in 1867 Annie Sarah  baptized & fathers occupation was Photographer. So far that’s the earliest mention of Edmund as a Photographer, but I suspect going on the style of card & this lady’s dress & hairstyle it may have been taken earlier, about 1864/6.

In the 1841 Census, before Edmund was married, aged 13, he was with his family living at New Street, Salisbury. His father William aged 50, occupation Publican, a change to details on Edmund’s Baptism record in January 1828 at St Thomas Church, Salisbury (Edmund b 2nd Jan 1828-Baptized 23rd Jan 1828) where he was described as a Fruiterer/Greengrocer (Could he now be running The New Inn or The Wig & Quill ? both are in New Street, Salisbury) mother Sarah aged 50, & siblings George, Alfred, Lucy & Caroline.

Mary Ann Bolland meanwhile in the 1841 Census was in Oxford, with her mother Mary 45 occupation Seary? Wife & siblings Charlotte & Frederick, I am unable to find her father John (As on her marriage cert) there are just too many possibilities for him ! 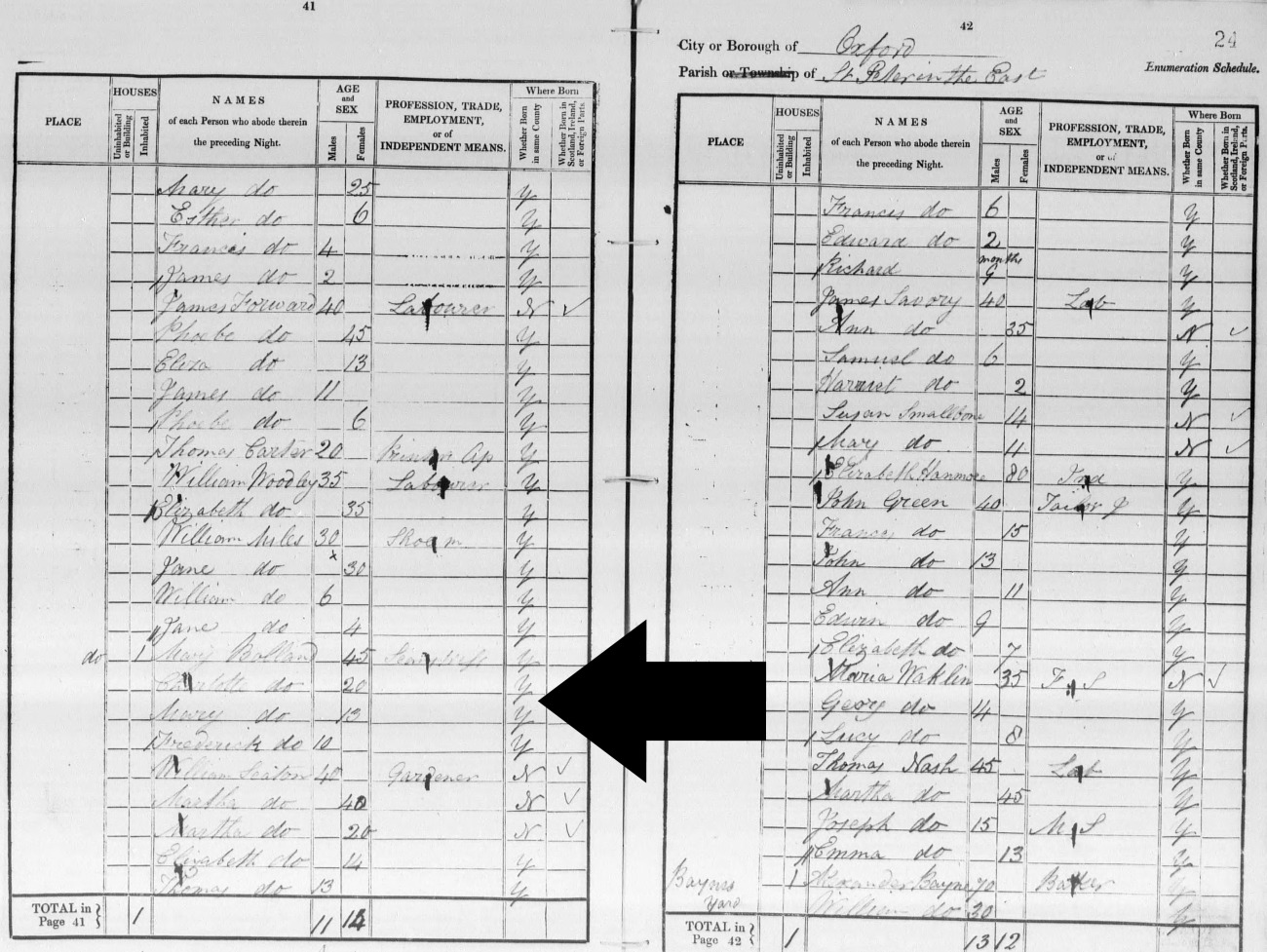 In the 1851 Census I found mother Mary (Mary Ann) described as an Infant School Mistress (School Mistress in the 1861 Census living with another family as a lodger…Then no Trace)  Daughter Charlotte 31 (b abt 1820) a seamstress in 1851 (House Servant in 1861 Census, unmarried, she then died 1864) & a daughter Sarah 29, a servant in 1851 (in 1841 Census she was a live in servant, for a Surgeon in Oxford & 1861 Census a Housekeeper, for a retired widowed, Magistrate in Cheltenham, Gloucestershire..She then died in Oxford on 18th October 1866)

Now to clarify some doubts I had about the father, I searched for Baptism records & found Frederick’s father listed as a Thomas Bolland ? (Again too many possibilities in records)  So I’m not entirely sure who all the Bolland children’s father was without an awful lot more research & sure proof.

So… back to our Photographer Edmund Rogers. Sadly in the 1881 Census I have found that Mary Ann is a widow, still living in The Close, Salisbury & she is a Photographer ! So she has carried on Edmund’s business, he died in the last quarter of 1878 registered in Alderbury, Wiltshire, close to Salisbury.

Here the family are in image above on the 1881 Census living at Devaux House, The Close, Salisbury…As you can see their son Charles is an Organist & Teacher (Is it at Salisbury Cathedral ??) which is very interesting as I found this information below about their eldest son Edmund…..

This newspaper report above is dated 10th April 1869, so Edmund junior would have been just 17 at the time..So the two boys both excelled at Music…..Did Edmund junior learn to play in Salisbury Cathedral as a child ? & what happened to him? I have found in the newspaper records an Edmund Rogers, Conductor of Music in later years..is this him I wondered ? …Here are just 2 of the Newspaper references to him, first one is dated 18th November 1871..Image below…. 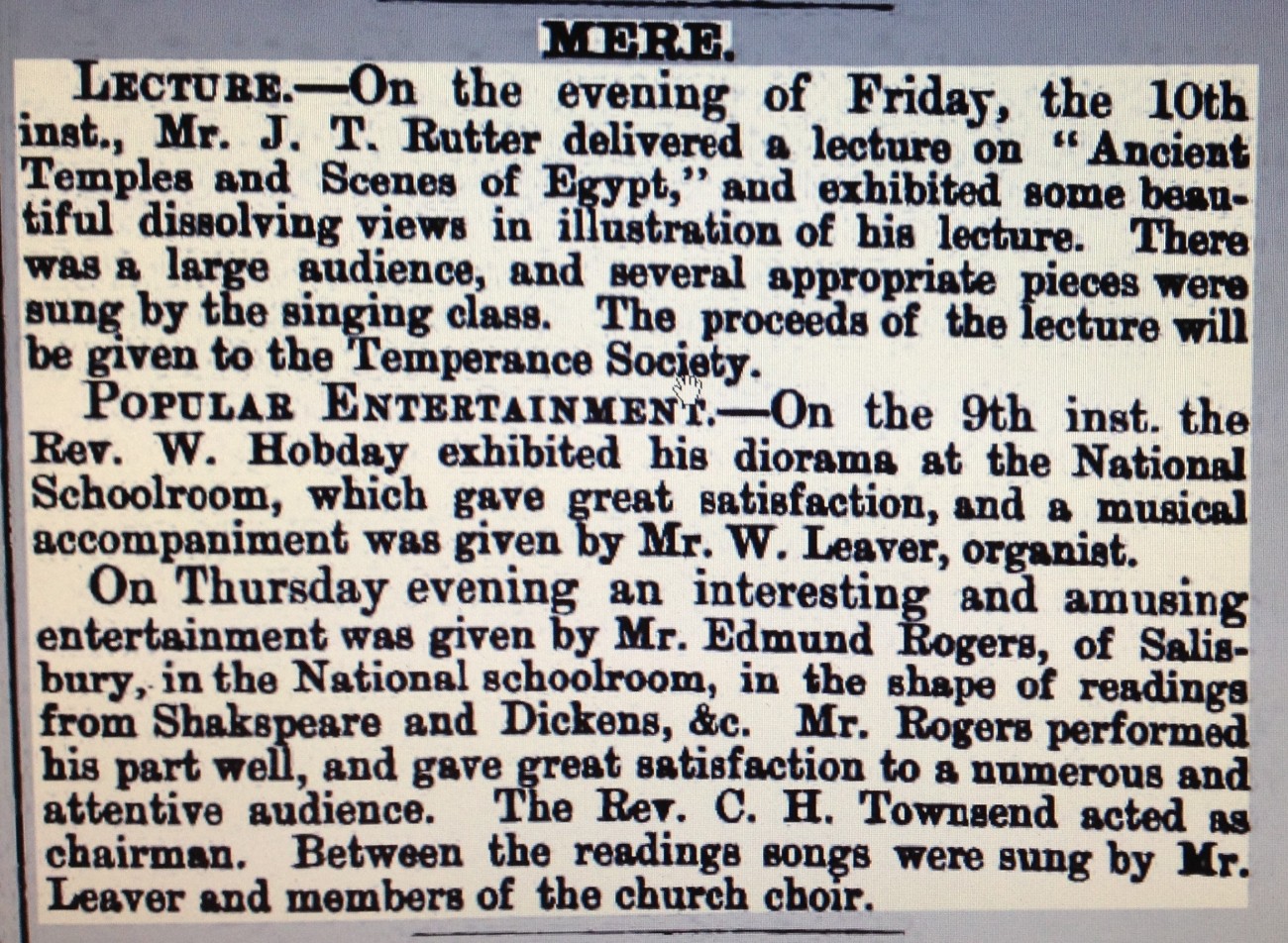 This is the 2nd one I have chosen & is from the Salisbury Times dated April 19th 1884. A performance at Bemerton Nr Salisbury..But the wonderful thing about this report is that is actually says that Mr Edmund Rogers, composer, now an organist at St Thomas, Portman Square, London…was a native of Salisbury & was a past Chorister of Salisbury Cathedral !! What super information ! So my hunch was right…… 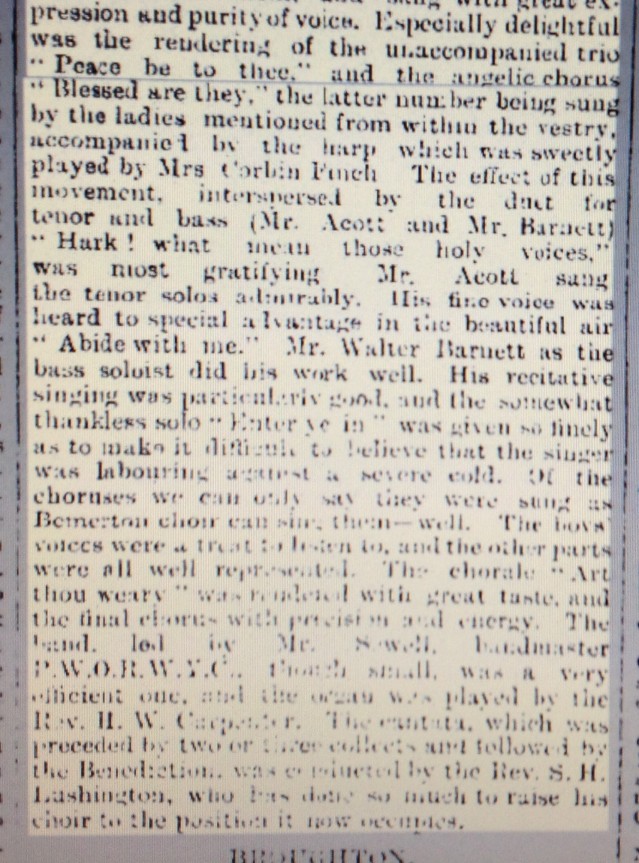 This is Edmund’s marriage to Henrietta on 5th August 1879..A Professor of Music

Here the family are in the 1911 Census, it says two children, although only one on here Winifred born in 1889, but I also found another daughter Evelyn born in 1881 ..and here is his will, he was not really a wealthy man…

Then I also found this in Google Books, in the Dictionary of Composers for the Church in Great Britain & Ireland. How wonderful to find….

Unfortunately I also found that Charles Alfred b 1864 had died in 1892, buried on 13th January, aged just 28. He has a memorial inscription it seems in St Martin’s Church, Salisbury. On the records on Find My Past ‘Wiltshire Memorial Inscription Index’ it says…… d at Alderbury OXF former Chorister & Organist of this church….

In the 1891 Census I found Mother Mary Ann Bolland as a visitor in Millbrook, Hampshire & her occupation was still a Photographer, so it seems she was doing well.

She was still living in Salisbury, as I found one of their daughters Edith still there. In 1901 Mary Ann has given up the Photography but still living at De Vaux House/Place, Salisbury & described as ‘letting out apartments’ Her daughter Edith, single aged 39 is living with her.

In 1911 Mary Ann is still at the same address De Vaux House & 3 daughters are with her, all unmarried. Emma Louise 51 a Head Teacher, Edith Emmeline 49, Florence Maria 45 an assistant Teacher. Emma filled the census in. 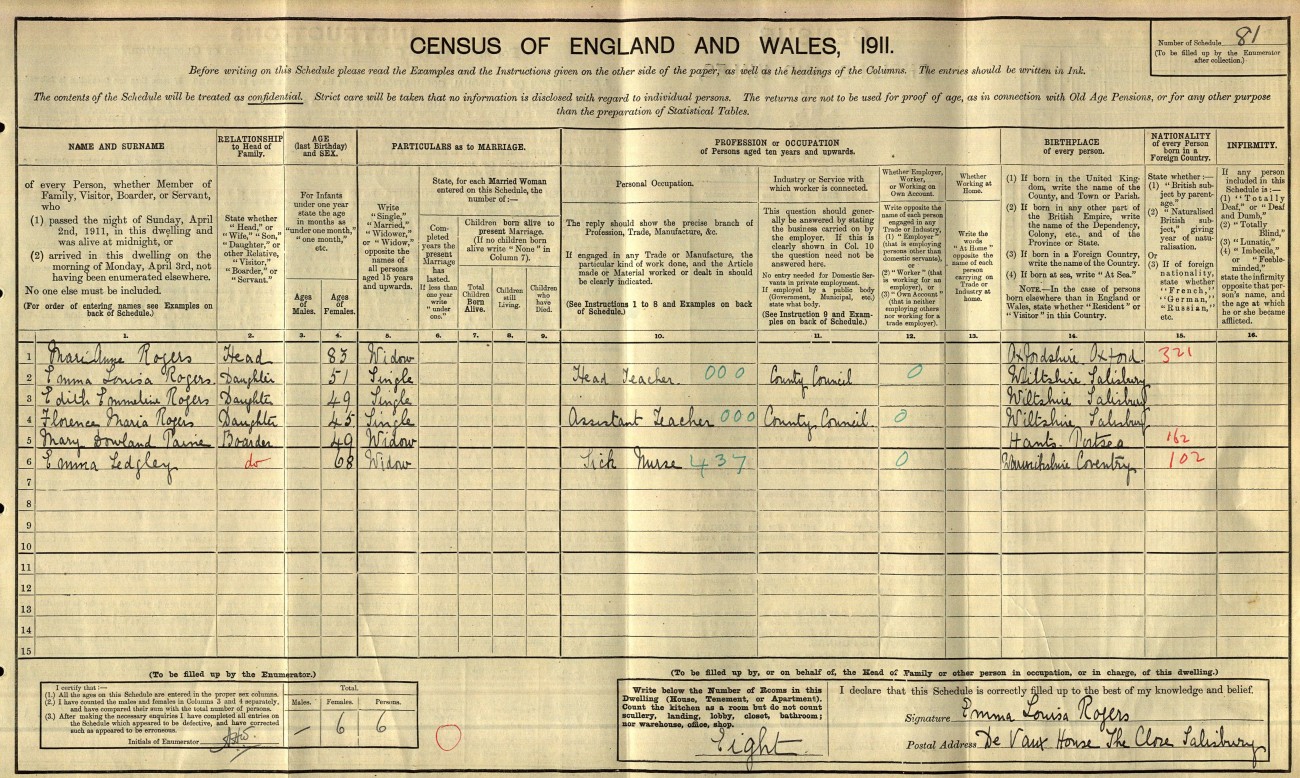 I have found a possible admission to the Lunacy Asylum in Wiltshire, 3rd October 1911 for Mary Ann & then death there on 7th April 1915. No proof that it is her of course, but date would fit as I have no other record I have found after 1911 & only a small detail I know, but her daughter filled in the 1911 Census…So a definite possibility.

So what happened to the rest of Edmund Rogers children….Well as you can see from that last 1911 Census Emma Louise, Florence Maria & Edith Emmeline are still alive & well. But I wanted to see what next..So I turned to the 1939 Register on Find My Past..& here they are, but not in Salisbury..They are living at 16 School Road, Twickenham, Middlesex. I wondered if the Annie S Cheane, widowed, might be a sister also..Annie Sarah ? Also Edith is missing?

So I searched again & found that Edith Emmeline had died on 12th December 1927 & her money in her will went to her three sisters…So Annie S Cheane/Creame/Creane is a sister.

I found her marriage to Henry James Creame (So many misspellings of this !)in the first Q of 1898. Henry James was a Carpenter. They lived at School Cottages, Hampton Hill in 1900. No children to this marriage, and he died in January 1934 aged 65. He was born in 1868 in Southampton, Hampshire. In the 1911 Census they are both living at 16 School Road, Hampton Hill, Twickenham, Middlesex…..Just where all the sisters are living in the 1939 Register, so the other sisters Emma & Florence went to live with Annie Sarah after Henry James died. I have found Emma Louise died in Setember 1940 aged 80. Florence maria died in March 1946 aged 81. Annie Sarah died in September 1941 I think, but not totally sure as her surname would be misspelt as Crane !

William Francis born in 1855 is a mystery, as he’s not on the 1871 Census with his family it has been a bit of a mystery tour..I have found some possible deaths….Nothing 100% But I have found a possible death in 1872, aged 17 years on a ship off Greenhithe Swanscombe, Kent. Did he join the Navy ? There is also the possibility that he may have emigrated ? So some loose ends on this family history……………

This image above is of the houses of De Vaux Place now..A very desirable place to live in Salisbury..If you have the money !!