This is the song by Vera Lynn in the actual film We’ll Meet Again released in 1943, we know through this letter this was filmed at Regents Park in 1942…..

This is a group of four great old photos, all kept together thankfully.

In my last part about the family with connections to A La Ronde, I thought I would share the few photos unidentified so far with you.

So now I have identified the couple, the child on Mum Stella’s lap is indeed their first born Stella Joanna Matilda Parminter Tudor!

I was amazed to find that her daughter had inherited from a cousin, a very famous National Trust property!

I was amazed when I opened the battered old suitcase and found eight certificates! 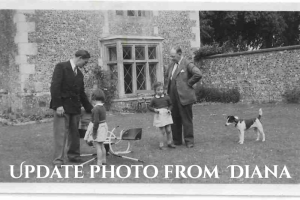 This photo above was taken before Rex married and it seems his training in the Fleet Air Arm as an Aircraft Mechanic…….

These two lovely Postcard Photos I couldn’t resist, they are just adorable children aren’t they……..

More of the old photos & more information about his biological Mum’s side of the family, GINN

So they hadn’t got Victor’s name wrong after all! What a surprise!