What a super Old Photo !! They look a lovely family, certainly not poor. The children and the parents are all very well dressed. When you turn it over there are names written on the back ! What a bonus ! It says “ L-R My Grandmother, Isabella Wallace, My Mother, L/Ginetta Wallace, My Uncle, Roy Walker, My Grandfather, John Wallace & young Andrew Wallace (died aged 35) ”

I have had several attempts at finding a corresponding family for this old photo, which I estimated from the fashions, to be 1900-1905. As you can probably see, the Photographer ******* & Sons was in Glasgow, Scotland. The only company I could find with “& Sons” operating in Sauchiehall St, during the Victorian & Edwardian times was Ralston & Sons, who were at several different numbers in the same street at different time, found via  Glasgow Photographers

There are lots of links on this Blog via my Victorian Photographers Page, all very handy for any research for your Family old photos.

Researching, I was amazed at how many Isabella & John Wallace I found ! I just couldn’t seem to match the names of children with parents as a whole ! I only have limited access to Scotland’s records via Ancestry UK & Find My Past UK or Family Search   ..I don’t have subscription to Scotlands People So I seemed to be going round in circles & not getting very far at all ! You know how it is…so frustrating ! I had lots of notes of all sorts of possibilities, but nothing conclusive. So I thought right, I will put on my Facebook page & ask if anyone knows the Wallace family or any ideas of what to do next, I needed help ! Sometimes you get to that point don’t you !….I am so glad I did..I had suggestions & help from three lovely friends & followers Steve, Liz & Simon….The breakthrough with the most probable family,  came from Simon of Charnwood Genealogy he found a death of an Andrew Y Wallace in 1932 in Steyning, Sussex at age 35, which would give a birth of approx 1897. So the dates fitted with the photo & also gave me a Y as a middle name possibility. He & I both found the 1911 & 1901 census that seems to correspond with this Andrew in the family. In 1911 they are living in Catford, Lewisham, London. John is a ‘Case Making Factory Manager’ & both him & his wife Isabella were born in Scotland, so we have the link there to where the photo was taken.

Plus Andrew Young Wallace was born in Barcelona, Spain, as was his brother Robert. Which would explain why I hadn’t been able to find a birth for Andrew. It also says that the couple had 4 children, one has died by 1911, so that gives us a possibility of a sister ! When we do go  back to 1901 we find the family living in Deptford, and hooray we have a sister Margaret G, so was Margaret known as Gretta (known as a transcription of Margaret) as Steve & Simon had suggested. Of course her middle name G? may be used as her first name also. She was born in Scotland & I could not find a birth for her with the records I have. But all the dates of the three children do fit together nicely. Of course as always I can never be totally sure without certificates, but best guess.

I have found also in the records on Ancestry, for John Crawford Wallace, this document in the ‘UK Mechanical Engineer Records 1847-1930’ Which would explain the fact they are a fairly wealthy family & the travelling to other countries like Spain, where he was working from 1894 to 1901 after Margaret was born, and where Robert & Andrew were born. We have to assume that the name Roy written on the back of this old photo is Robert, did they call him Roy for some reason or was this just a simple error by the person who wrote this. Of course we still don’t know anything about child no 4, but they may have been born & died in Spain. The interesting thing also in this record below is the company he was working for before he went to Spain. It was R.C.Wallace & Co, Engineers, Glasgow..more on that below image.

I went back in time on the records, searching for John Crawford Wallace b 17 July 1865 Ardrossan, Ayrshire, Scotland, amazingly I found lots of John Wallace’s  Could be very confusing !This is from the 1891 Census..Just three years before Margaret was born…John Crawford Wallace was also listed as a marine engineer & I am assuming that Robert C Wallace, his father is the owner of the company that he worked at. You will see on here that John C was married, not to Isabella but to Marion (listed as Daughter in Law) ten years older than him & they had a daughter Jeannie K Wallace aged 2…….I am unable to look at the image from Ancestry, you have to go to Scotlands people for that, but we can still see the details.           See Below

I wonder what happened to Marion & his first daughter Jeannie, just three years later he had another wife & daughter ! I was lucky enough to find John Crawford Wallace’s Will..Two images, the second of which gives us Margaret’s possible married name, although it doesn’t state daughter ! I have found a Margaret Wallace marrying a Sidney Harold Bridger in the first quarter of 1918 in Lewisham. Then I looked at the 1939 Register & found a Margaret G Bridges, living at 49 Courtfield Gardens, Kensington. She is listed as Divorced & her birth date is 19 July 1894. So I would think this is probably the correct Margaret. I can’t find when Isabella died, but obviously after 1921…So many questions unanswered !

I found a couple of interesting records about Robert Crawford Wallace b 1896 in the Passenger lists..The first one when he listed his Mum as next of kin, and the second records at age 39, he was living in Australia and travelling to Canada..A mechanical Engineer..

This is Link to Public Tree on Ancestry if you are a member. Wallace Family Lynns Waffles

I have not had much experience with Scottish family history records, although I do know that certificates give you more information that those from England, and their naming of children is sometimes very helpful for finding elusive surnames. Here is a very good guide on how to get started  with Scottish Genealogy

I also have another old photo with the name Wallace, it may or may not be related !         ..Here below 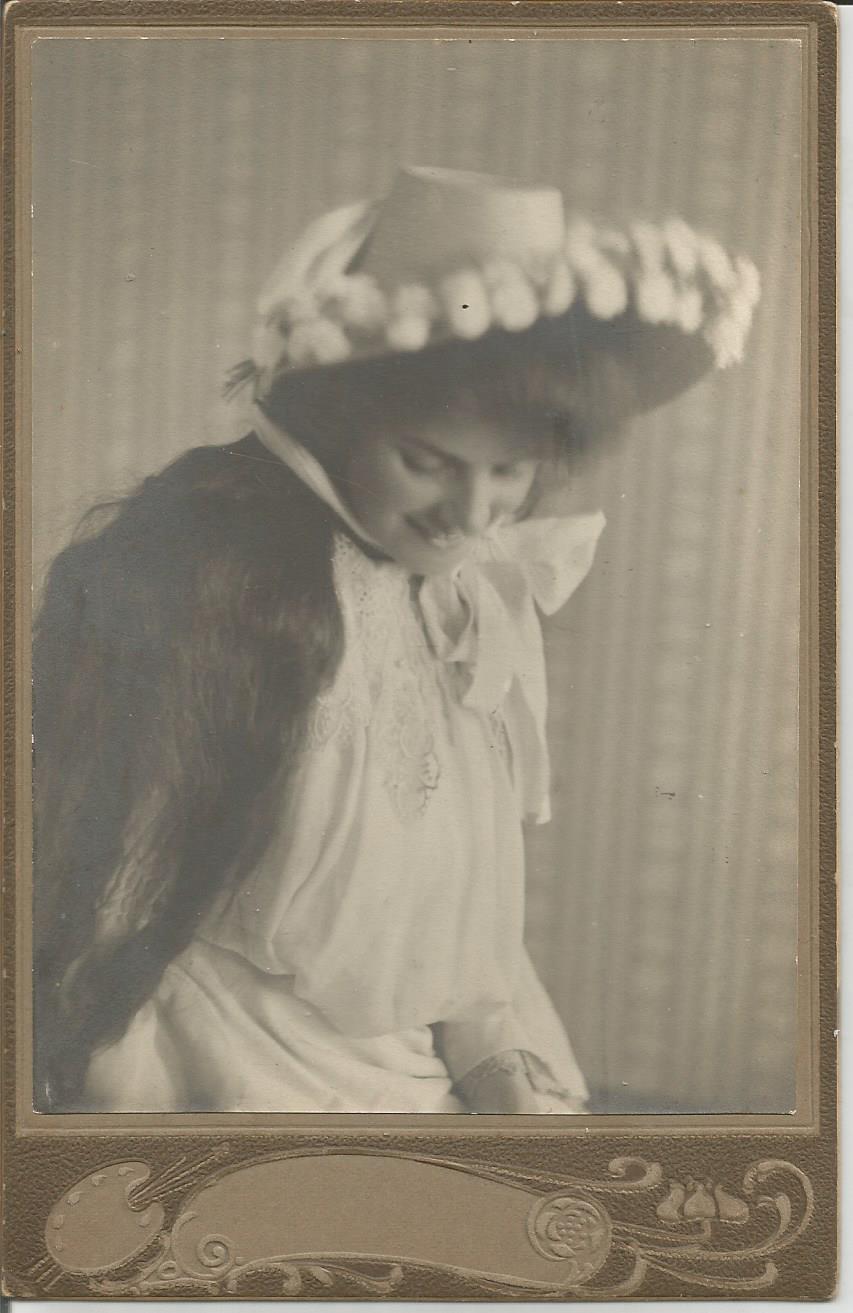 Second photo says on the back… “May Wallace, taken by Bert at 21 Laitwood Road, Balham, 1906. (London) Is Bert the Robert in our family, and who is May, a cousin maybe?    ..Note…The plain Cabinet Card frame for a Photo is typical of the type that was used for Amateur Photographers & Travelling Photographers who didn’t have a Studio address.

Amazing isn’t it what a great thing the internet is..Social Media used for finding out some great info, always showing that often two heads are better than one ! If you are stuck on your Family History research there are lots of super forums & people out there always willing to lend a helping hand & give you some advice or just to share ideas, sometimes it’s all you need to help you move along a bit.