George Henry Chubb and Family plus the Rice Family

We have just recently moved from Shaftesbury to Beaminster, still in Dorset, but down nearer to the coast.
Moving gives us the opportunity to explore different places locally, and of course different car boot sales and fairs.
This old photo is a very recent find, the lady had the picture in a very nice silver frame.
So I said  …Actually I am only interested in the photo, would you sell separately?
Oh yes she said……… I couldn’t believe my luck when I saw all the information on the back after she gave it to me !
And its such a wonderful image…………..

So lets start with George Henry Chubb born Alverstoke, Gosport, Hampshire in Oct 1853. Vol 2b. Page 387. To parents George Chubb Snr, a Mariner/Labourer, born 6 October 1817 (His father was called John Chubb) and Catherine Jane Forward, born 1827/36, I have found several conflicting records of her birth year, but I suspect 1830/31 which would have made her 15/16 when she married George.
They had married on 15 Sep 1846 in Alverstoke, Hampshire. They had eight children that I have found.
Jane, Matilda, Mary Ann, George Henry, John William, Louisa G, Pricilla E and Emily Catherine.
Here is Jane Chubb (Catherine Jane) without George in 1861 census….
Because George Chubb Snr..see pic below, was on Her Majesty’s vessel Persian, a gunners mate and listed as single 🙂

The next record I have found is desperately sad, of Mum Catherine Jane Chubb’s sudden death, aged 32 in the paper, it seems just two weeks after giving birth to Emily Catherine Chubb, Died maybe as a result of giving birth.
This inquest report below was in the Hampshire Telegraph on 18th November 1868…….

I also found that her little Emily K/Catherine Chubb tragically died at the beginning of 1870 at just over a year old…..1st Quarter, 1870. Alverstoke, Hampshire. Vol 2b. Page 386.
In the 1871 Census, George Chubb Snr was listed as a pensioner of the Royal Navy aged 54, living in Alverstoke, with four of his children.
Previous to this he had been a Court Bailiff for the County court in the 1861 census, he died in 1876..see below….

George Henry Chubb 17 years old, was following in his fathers footsteps..Training in the Navy…see below 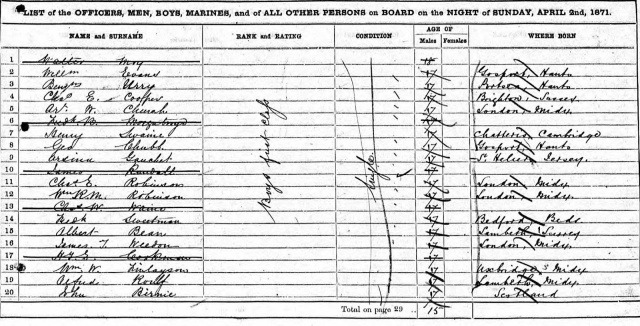 In 1881 he was still in the Navy but now married.
George Henry married Elizabeth Catherine Matthews in 4th quarter of 1877.
Portsea Island. Vol 2b. Page 880.
I have followed up on quite a few potential children of the couple, but not found anything conclusive.
As time went on in their marriage I think Elizabeth was proving to be quite a handful !
George Henry posted this advert in the Portsmouth Evening News on 30 September and 1st October 1885, stating that he would not be responsible for his wife Elizabeth’s debts !

Then I found in this Divorce, dated 1889, looks like Adultery !

On doing more research I found this report below, in the Hampshire Telegraph on 2nd November, 1889.

George Henry Chubb the following year, on 13th September 1890 (3rd quarter.1890. Stoke Damerel, Devon. Vol 5b. Page 543) married Caroline Matilda Bray.
The lovely lady in the picture with him.
Caroline M Bray’s fathers name was John Fishley Bray, a Seaman in the Royal Navy, I have found him with a wife Jane and seven children including Caroline in the 1861 census, and again in the 1871 census, a RN Pensioner then with three of their children including Caroline, living in Antony, Cornwall.
Have found more info on some of her siblings…Celia Kingdom Stranks (born Bray) and Amelia Boyle Charles (born Bray)
In the 1881 census they have moved to Charles, Cornwall (John Chubb, George Henry Chubbs grandfather lived in Charles too ) they have an unmarried daughter Celia who was a school mistress living with them.
In the 1891 census Jane was living in Kea, Cornwall, with a widowed daughter and Grandchildren. (John Fishley died in 1889)
Have found several possible deaths for a Jane Bray 1891/3/5/7 ? Any one of them could be Caroline’s Mum.
Here is John Fishley Bray Will ( a Navy man pensioner )..see below…

I would have thought that George Henry moved to the Plymouth area of Stoke Damerel to make a fresh start, but to be connected with the Navy, and he may have met Caroline through her father. George Henry died in 1920….see below……

Now we come to the handsome young man in the photo Charles Thomas Bray Chubb, he was born in the 3rd quarter of 1891 ( actually on 1st August 1891) Portsea Island, Hampshire. Dating this lovely old photo to around 1898 ?
In the 1901 census he was with his Mum Caroline M, listed as Charlie TB in Stoke Damerel, Devonport.
This lovely young chap also went into the Royal Navy.
Records found via Ancestry..
Found this record from 1913, of Charles TB Chubb, Seaman, going to New York to join a ship the SS Kentucky.

With thanks to Devon Family History Society records on Find My Past I found his marriage to Lilian Minnie Laskey on 4th March 1919 in the parish of Stoke Damerel, Devonport.
Lilian Minnie Laskey was born in Stoke Damerel in 5 Nov 1893/94?. Her parents were William a ship fitter, and Mary, she also had a sister Florence Amy plus two other siblings.
Lilian Minnie Chubb died in June 1958 (Aged 64 not 63) registered in Plymouth, Devon.
They had a daughter Delsia Eileen Chubb born in the 1st quarter of 1920. (23rd Feb 1920)
They were both on the 1939 register on Find My Past.
A household at 52 Portland Road, Plymouth. Good job you can look at the original, because the household had been transcribed incorrectly !! Joseph O’Connor lives next door and Lilian M Chubb was not even mentioned !
Charles TB as a Gas worker, Heavy, Lilian M Domestic duties, one closed record in the household, I assume Delsia b 1920, then Mary Laskey (Lilian’s Mum) also living with them, born on 3rd June 1859.
Delsia E Chubb married Ronald W Rice in the 2nd quarter of 1941 in Pontipridd, Glamorgan, Wales.
Lilian Minnie Chubb died in June 1958 aged 63…..
Charlie TB Chubb married Beatrice May Wright in June 1959. Bristol.
Vol 7b. Page 75.
Charles Thomas Bray Chubb died in 1966…see below…

According to the back of my photo they had two children Graham and Heather Rice.
This is what I have found for them….
Graham M was born in Bristol in 1944.
Heather Y was born in Uxbridge in 1949.
A Graham Malcolm Rice married a Barbara Ann Swiss in Plymouth, Devon in 1968.
Thanks again to Devon FHS on Find My Past we have exact date 23rd March 1968 at St Andrews, Plymouth.
In 1994 I have found a Graham M Rice marrying a Margaret Kennar in Plymouth, Devon. So did Barbara Ann pass away or were they divorced ?? or maybe its not the correct Graham M….I’m not sure…
Also I haven’t found any likely children for Graham Malcolm either.
I have found a Heather Y Rice marrying a Brian G Williams in 1st quarter of 1969 in Tavistock, Devon
Then on the electoral rolls for up to 2005 both living in Wales at North Avenue, Llandrindod Wells. Then in 2006 both living in a flat in Temple Street, Llandrindod Wells.
I have found nearly 50 possible Williams children with a mother Rice…lets hope one at least may be right and there is offspring somewhere out there !

Do you know this family ? or are they your ancestors ? please get in touch, I would love this old photo to be returned to its family.