Wishing all my lovely followers and readers a wonderful Christmas and a very Happy and Peaceful New Year🌟many thanks to you all for reading, commenting, helping with clues and following me throughout 2019, I really appreciate all your support🌟

This is my Christmas Blog about the Howarth Family of Leigh, Greater Manchester, and their Christmas Wishes🎅🎄

In John Bartholomew’s Gazetteer of the British Isles in 1887, Leigh was described:

‘Leigh. A market town and parish(railway stations West Leigh, and Leigh and Bedford), SW. Lancashire, 21 miles NE. of Liverpool, 16 miles NW. of Manchester, and 193 miles NW. of London by rail – par., 13,792 ac., pop. 46,959; town, pop. 21,734; 2 Banks, 2 newspapers. Market-day, Saturday. The town is situated on the Wigan and Leigh branch of the Leeds and Liverpool and Bridgwater Canals and has an extensive trade in its manufacturing of cotton and silk; the minor industries being glass-working, iron founding, malting, and brewing. Coal mines are in the vicinity‘ The Howarth family has members on both sides who worked as Silk Weavers and Coal Miners. ‘Domestic spinning and weaving of Silk led to a larger Silk and later Cotton industry. Leigh also exploited the underlying Coal, especially after local connections to the canals and railways‘ (from online Encyclopedia)

This wonderful family group photo above is of Roger Howarth with his second wife and all of his Children. How much nicer isn’t it to receive a lovely family photo instead of a Christmas Card.

Roger firstly married Ellen Green and then her sister Ann. This is Ann in the group photo.

This Cabinet Card is Roger with his three elder daughters. The photo was taken in about the first quarter of 1891, I believe it was taken just before his second marriage to Ann Green in that quarter. Floria the youngest daughter was born in the first quarter of 1889 and she looks about two years old here, so it would fit with the new chapter in their life beginning.

Both sides of Ancestors in this family have a history of being Silk Weavers, a huge industry in this area of Lancashire where they all lived. While researching for this Blog  I came across this wonderful article all about the industry in Leigh, Lancashire on the Leigh Life website, direct link here: Silk Manufacturing in Leigh.

Note: Prime Minister William Ewart Gladstone died on 19 May 1898, he was the Liberal Party Prime Minister until 1894, so is it likely that is the reason for William’s middle name as he was born shortly after. Death: William served in WW1, Rank: Lance Corporal. Regiment: Manchester Regiment Battalion. 18th Battalion. Regimental Number: 43747. Type of Casualty: Killed in action 23 Apr 1917, France & Flanders, buried at Wancourt British Cemetery, Departement du Pas-de-Calais, Nord-Pas-de-Calais, France. After William was born the couple had two more daughters, Elsie 1899 and Annie 1902.

Roger Howarth died on 15 August 1931 in Barton Upon Irwell, Lancashire, at the age of 73. I haven’t found a definite death for Ann Howarth (Green) yet.

As you can see both his wives had the surname Green, surely they had to be related I thought, it’s too much of a coincidence! So researching for the family tree I found they were Sisters, but here we have a problem, as up until this Act their union was illegal:  ‘The Deceased Wife’s Sister’s Marriage Act 1907 was an Act of Parliament of the UK. allowing a man to marry his dead wife’s sister, which had previously been forbidden. This prohibition had derived from a doctrine of canon law whereby those who were connected by marriage were regarded as being related to each other in a way that made marriage between them improper‘. Info from Wikipedia. So this information makes Roger and Ann’s marriage in Leigh, Lancashire in Jan 1891 illegal! Fancy that!

Is this why the couple left Lancashire and moved to Sherborne in Dorset when Ann was expecting her first baby? Roger and Ann were together as husband and wife in Lancashire at the time of the Census in 1891, with two of Rogers daughters from his first marriage, Sarah and Mary, Floria who was just 2 years old, was with her Paternal Grandparents Racheal and James Howarth at the time of the 1891 Census. Roger and Ann’s first daughter Nellie was born in December 1891 in Sherborne. Sherborne also had a Silk industry, so Roger was able to still work as a Silk Weaver. Was there gossip in their home town about their union or worse? Or maybe it was just for better work?

‘Congregational Minister, the Rev. Joseph Ogle, formed a limited company and re-opened the mill after introducing better working conditions and extended the operation to weave silk as well as to throw it ( the process of making threads from the unwound cocoon silk).

Only a decade passed before Sherborne silk became renowned worldwide, thanks due mainly to the skill of Ogle’s brother-in-law Samuel la Mere, and an order was received for flowered silk for Queen Victoria’s Diamond Jubilee’.

Roger and his wife Ann and their children had moved back to Lancashire for the 1901 census, it doesn’t seem as though they had been back long as they youngest daughter Elsie had been born in the third quarter of 1899 in Sherborne. Their marriage was still not legal but maybe people had forgotten after being away for a few years from the area? They first stayed with Ann’s brother James Green and his family, James was now a Greengrocer where previously he had been a Silk Warper. See 1901 Census below: 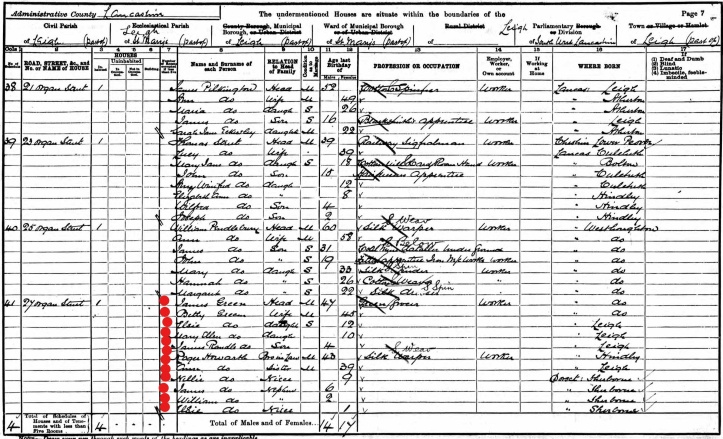 In the 1901 census Roger’s first three daughters Sarah 20, Mary 15 and Florrie 12, were staying with their Grandparents George and Sarah Green and their Aunt Alice in Leigh, Lancashire. Had the two elder girls come to live with their Maternal Grandparents when their father went to Sherborne or did they go with Roger?

In this 1901 census, their Aunt Alice Green and Sarah and Mary were working in the Cotton Mill. Their Grandfather George Green wasn’t working but ‘living on own means’ in the previous census 1891 he had been a Coachman, 1881 he had also been a Coachman, although his son James aged 27 was a Silk Warper, and daughters Sarah 25, Ann 19 and Alice 14 were Silk Weavers.

The next generation back was another Joseph Howarth 1806-1869 and his wife Mary Ann (Leigh) they also were both Silk Weavers. The next generation back, Roger’s Great Grandfather, again a Joseph Howarth 1771-1852 with his wife Elizabeth (Maddock) were also in the trade as you can see from this 1851 Census, ‘Pauper Hand Loom Weaver Cotton Silk Weaver, they and all their neighbours, it was a very tough life:

When I came across the Baptism record for this last Joseph Howarth born in 1771 I was thrilled to see that the officiating Curate or Rector had written the mothers parents names on the register! So Elizabeth was Elizabeth Maddock and her parents were William and Betty Maddock. How brilliant is that, once again it always pays to look at the actual record and not just at the transcription. See Below: 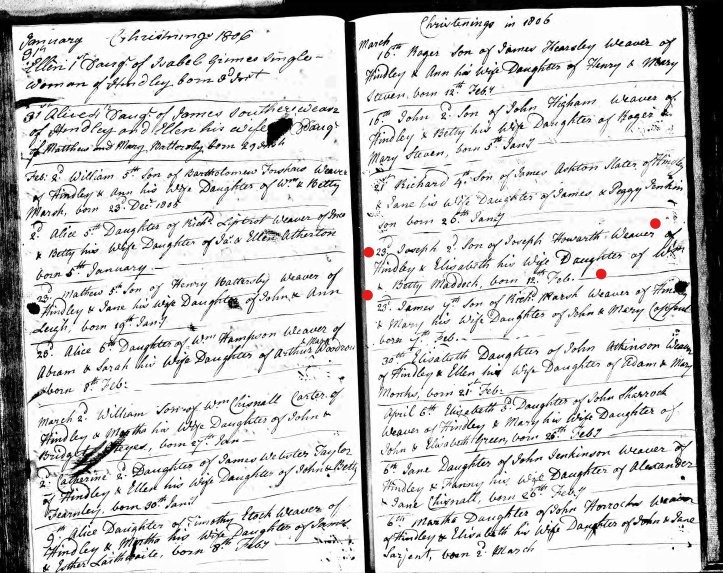 I wondered then who was the Rector at the time who wrote all this information on the registers, and while searching for the answer I came across this absolutely fabulous website for Lancashire Online Parish Clerks: LancashireOPC

If you go to the Parishes Index, all in alphabetical order, and look up Hindley, then All Saints Church (two photos below) where this Baptism is from there you can look and see that the Curate at the time from 27 Dec 1789-6 October 1810 was John Croudson. But looking at the previous Baptism records and the Baptism records after 6 October 1810 they all have the mother parents, so helpful and brilliant to find. In fact having a brief look at other records on the site for this Church, there are even many ’cause of deaths’ on lots of the burial records, so a great source if you are researching family in Lancashire.

Then after concentrating on Roger and his immediate family, I started to add more people to the family tree on Ancestry, as I really wanted to find out who these two ladies were below, Maud Howarth I have found, I think, Edith Maud Howarth was born in 1894 to Roger’s brother Simeon and his wife Ann (Kirkpatrick) They also had a daughter Sarah Ann Howarth (second photo)born in 1891 and died in 1946 as a Spinster, mentioning in her will her sister Annie was also a Spinster, very helpful! BUT I cannot rule out Sarah Howarth who was Roger’s eldest daughter by Ellen, I haven’t found a marriage or a death yet for her, so I’m not sure which Sarah it could be …yet! 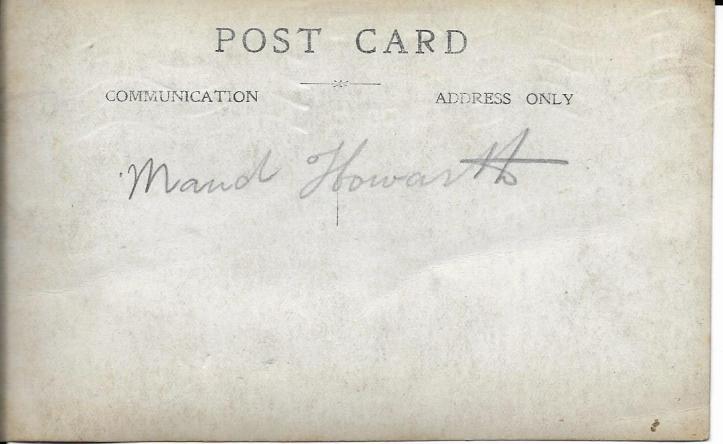 What a stroke of luck! I found this record on Ancestry! Edith Maud Howarth became a Midwife on 15 Aug 1925, see entry sixth down from the top, and it’s very likely this photo above was taken to celebrate that she had qualified.

This last photo below is a lovely photo of Dad? but we don’t know the man’s name, it was sent to Mr and Mrs Howarth, ‘I send you all good wishes for a Happy Xmas and a Bright and Prosperous New Year’ 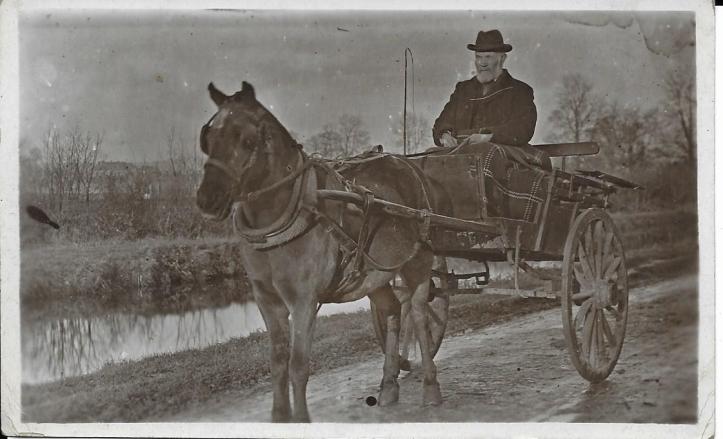 ‘Dear Mr & Mrs. Howarth. I am sending you Dad’s photo which I thought you would like and hope you are all quite well this long time but I do not forget you both although I have not written before but I send you all good wishes for a Happy Xmas and a bright and prosperous New Year and mother and father and all sends the same. How is your dear Mother and Dad I often think of the happy times we spent together while we was with you. My mother is very poorly. Now I must close with best love top you from your loving friend Hifenia’? Not sure of the friends’ name but tried to match the letters up from the rest of the writing.