The Grandchildren of Richard & Nellie Castle 1937.

What a lovely photo, a super recent find at the Fleamarket.

How lovely to have everyone’s names on the back, now it was my job to work them all out and create a family tree, thank goodness I had an area to work with too.

The Castle family tree. Richard Castle (Grandfather) was born in 1866 in Bristol, Gloucestershire, the son of Richard. He married Ellen Gittins and they had five children together.

The five children were

Richard Castle was born 25 Nov 1863 in Bristol, Gloucestershire the son of Annie and Richard. He died on 29 January 1940 in his hometown at the age of 76 and was buried in Redland, Gloucestershire.

I found this obituary in the Western Daily Press via British Newspapers: ‘DEATH OF LEADING BRISTOL BUSINESS MAN Notable Career of Mr Richard Castle A large number of Bristolians and others in many walks of life will regret to learn of the death of Mr. Richard Castle, one of the city’s most prominent businessmen Mr. Castle, who lived at 5, Hampton Road, Redland, was in his year. He has been a well-known figure in the commercial life of Bristol for a great many years and has also taken a very keen interest in drama and sport. Mr. Castle was born in Bristol in 1863. He was educated privately and was then given the opportunity of going to Malvern or Germany. He chose the latter because he considered the language would be most useful from a commercial point of view. In 1881 he commenced his business life with Messrs Bryant, Perry and Lowe, stockbrokers, and then entered an insurance office before joining his father, who was Manchester warehouseman, trading as Messrs Naish and Co., of Castle Street, Bristol. Mr. Castle became home and foreign manufacturers’ agent for the textile trade, at Queen Square. Bristol. He had been in the consular service since 1904 and acted as American Vice-Consul for 14 years until the year 1916. He then became Vice-Consul for Latvia, and his services to the Baltic States were recognised some years ago when the President of Latvia decorated him with the Order of the Chevalier of the Three Stars. Keen Interest in Drama Always keenly interested in the theatre. Mr. Castle was a founder member of the Bristol Playgoers’ Club and remained a member of the committee since its foundation in 1911. Twice he held the office of president. For 25 years he was honorary secretary of the Bristol branch of the Actors’ Church Union, and few men have done more to bring Church and stage together this city. He had been a member of the Bristol Savages since its foundation in 1904 and was one of the oldest of the members of the Bristol Constitutional Club. Mr. Castle had a great love of cricket and was a member of the Gloucestershire County Cricket Club. He was a friend of W. G. Grace and used to play skittles with him. The Seamen’s Mission claimed his attention, and he was a member of the committee. Mr. Castle was married Westbury-on- Trym on August 15, 1888, and in 1938, with Mrs. Castle, celebrated their golden wedding. Few Bristol citizens were held in higher esteem than Castle, who was known with real affection amongst his many friends as “ Uncle Dick.” He leaves widow, son and three daughters The funeral will take place at St. Mary’s, Tyndall’s Park, on Wednesday 12.30 (31 Jan 1940)’ Here below are the list of mourners taken from the Western Daily Press on the 1 Feb 1940. 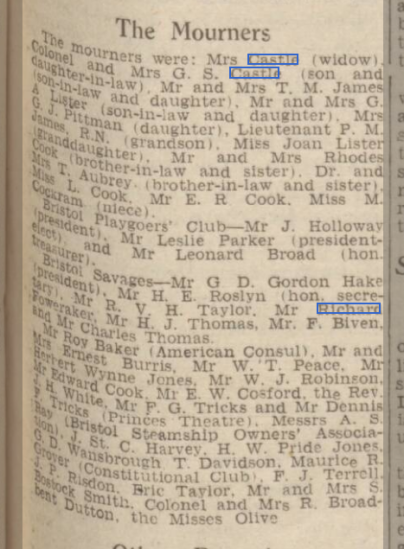 Richard and Ellen’s eldest son Richard Mordaunt Castle died at the young age of 37 and I found this account in the British Newspaper Archives online: This is from the Western Daily Press 28 August 1929. ‘DEATH OF R. M. CASTLE IN CHINA. Widespread sympathy will be felt with Mr and Mrs Richard Castle, 3. Prince’s Buildings, Clifton, on the death of their elder son, Richard Mordaunt Castle, in China. A cablegram was received yesterday stating that had died Monday under an operation rendered necessary owing to peritonitis. For some years Mr Castle had been in charge of the Mukden factory of the British American Tobacco Company, and later had gone to Tientsin to supervise the’ factory there during the absence of the manager, and it was at Tientsin that his death occurred. Mr Castle, who was years of age, had been associated with the British American Tobacco Company for a long period, first in England and, since the war, abroad. was only 12 months ago that he was home on leave in Clifton, where he was very popular amongst a large circle of friends. A pathetic incident in connection with the cablegram received yesterday, that on the same day his parents had a letter from him in which he said how well he was and giving an account of some the recent happenings in China’.

Below are the two parts of the tree showing all the Grandchildren mentioned on the old photo. If you are a descendant of this family please get in touch either via a coimment on here or direct by email to lynnswaffles@gmail.com. 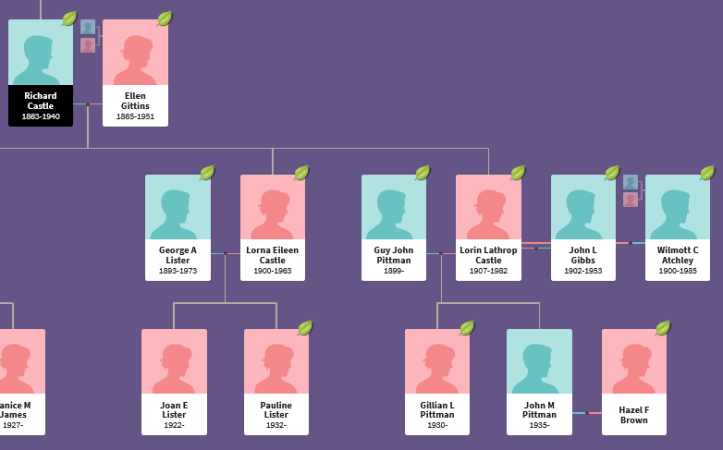 Here’s an improved version of the photo with many thanks to lovely friend Steve Kerry, he’s a whizz! 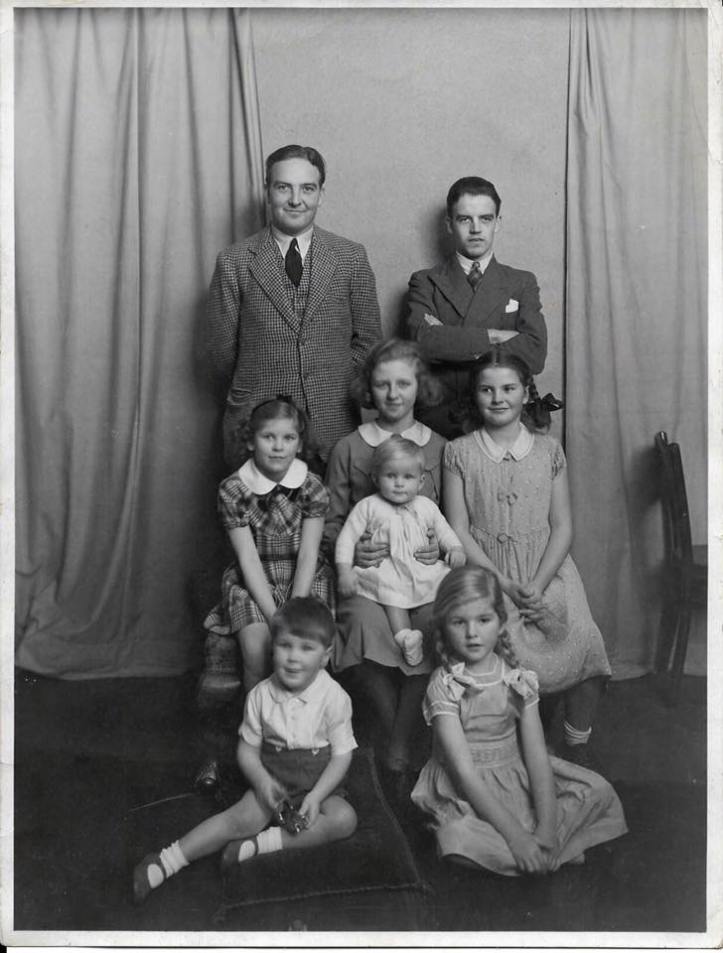