UPDATE… as of 9th February 2017 all of these fabulous photos in this collection are now back with their family. The new owner is a direct descendant of George Swinford Wood & Mary Jane Eliza Salisbury, isn’t that wonderful!

On our September holiday, we went all along the South Coast from Hayling Island to Hythe in Kent this time. Of course, on the way, we couldn’t miss having a visit to Ford Car Boot! We went to the Thursday one our first week & the Sunday one coming back! As always I was very lucky with my finds from there. This is one such collection, my Salisbury Collection.

This is the envelope I saw first!

When you arrive at Ford, no one is allowed in until 7.30am (8.30m Sunday), sellers or buyers, so of course, when the time comes everyone is just like bees round a honeypot, clambering to see what treasures they can find! You have to be tough & stand your ground otherwise you won’t get anything. Right at the beginning, a seller in a large van started to unload his boxes onto the table & I saw old photos immediately. So I started going through one box among at least 8 other people, I found an envelope at the bottom saying Certificates! WOW! so thinking quickly that these have got to be one family hopefully,  I just very quickly got hold of any CDV & good pictures that I could & of course any with writing on. (It would have been good to afford to buy both the boxes & then sort later at your leisure but these sellers would charge you a fortune for that!)

Inside envelope was this Birth Certificate 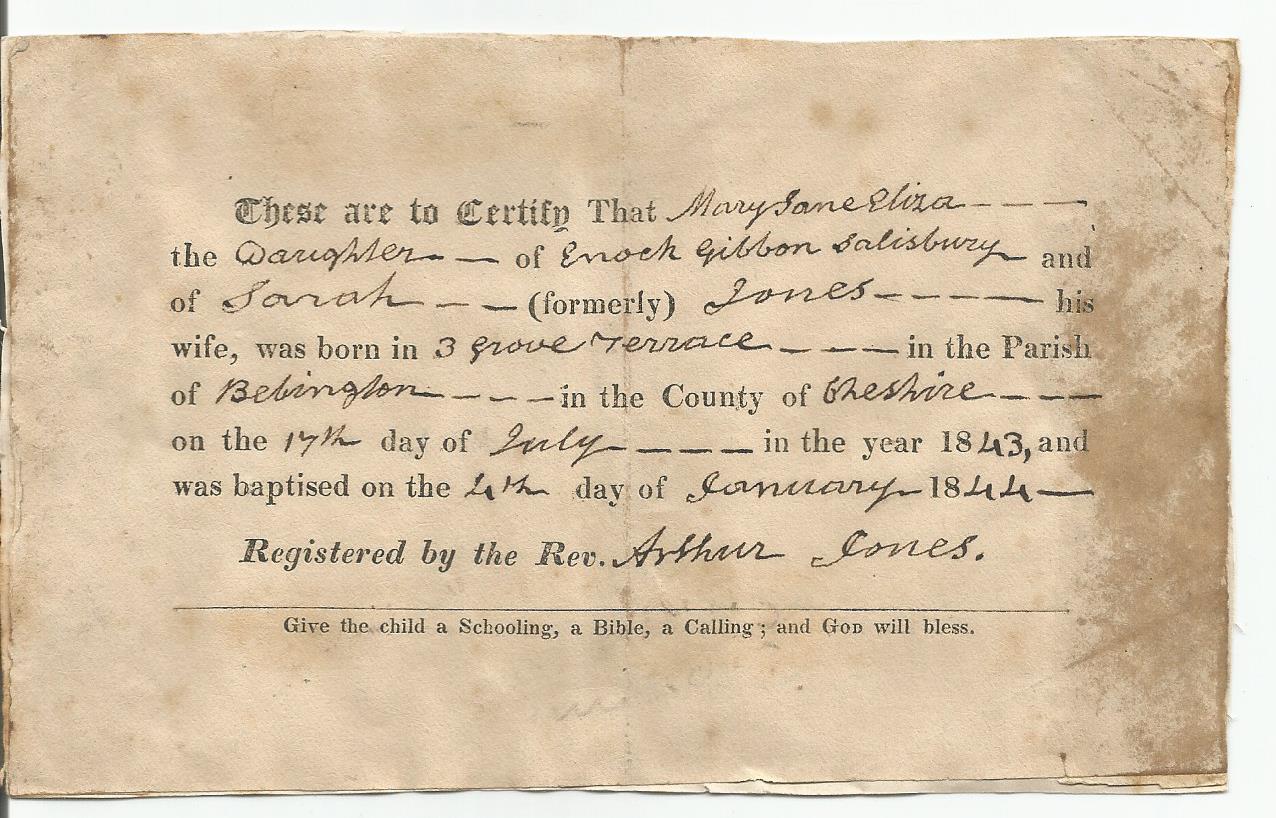 Also in the envelope, Baptism

Then thankfully Dave came up behind me to see if I wanted help & I said yes go through the second box & any good ones CDV or names on the back get them! It was a bit frantic, to say the least. You get lots of dealers there hoping for a gem to make money on & they push & shove, but I can do that with the best of them. 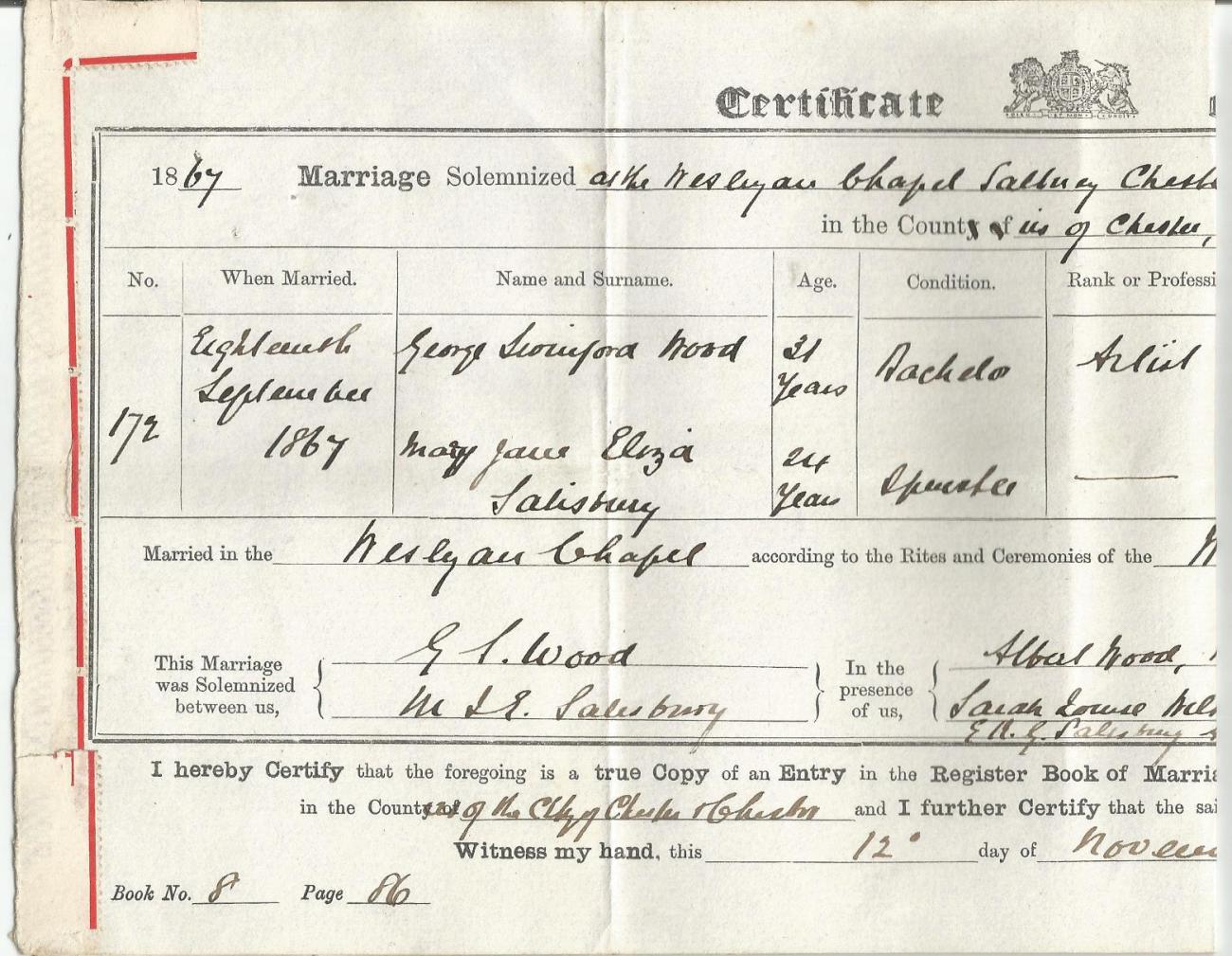 Marriage certificate inside the envelope(Left side)

Marriage certificate inside the envelope(Right side)

So here’s what I have found out so far…..Mary Jane Eliza Salisbury was born on 17 Jul 1843 in Eastham, Cheshire, England as the first child of Enoch Robert Gibbon Salisbury and Sarah Jones, daughter of Minister Rev Arthur Jones.

When she was 24, she married George Swinford Wood, son of Henry Wood and Harriett Lomax, on 18 Sep 1867 in Wesleyan Chapel, Salling, Chester, Cheshire, England.

George Swinford Wood was born on 08 Apr 1836 in Liverpool, Lancashire, England as the second child of Henry Wood and Harriett Lomax. He had two siblings, Mary Ann (Marianne), and Albert. When he was 31, he married Mary Jane Eliza Salisbury.

He died in Jan 1906 at Bodlondeb, Conway, Caernarvonshire.

George Swinford Wood and Mary Jane Eliza Salisbury had two children that I have found.

The Wood family didn’t look very prosperous at the time of Henry & Harriett’s marriage in 1830, but the trade his father started led to the family having lots more wealth & becoming quite a large company of Iron Merchants, Henry Wood & Co in Saltney, Chester, making cables & anchors. The company’s anchors were selected for Brunel’s Great Eastern, the biggest ship ever built at the time. Wood’s Patent Anchor was used on Royal Navy ships and other vessels.

Their son Albert b1838 I gather ran the family business & the family eventually became very wealthy, from humble beginnings, with Albert in about 1876 building the wonderful large home Bodlondeb, Conwy, Caernarvonshire, Wales.

As Albert never married, it seems the whole family lived there in Wales with him. His brother George Swinford who was an artist, exhibiting at lots of places Royal Academy, Royal Cambrian Academy, Royal Hibernian Academy, Glasgow Institute of Fine Arts, Manchester City Art Gallery, Royal Society of Artists Birmingham. This is just one of his paintings below… 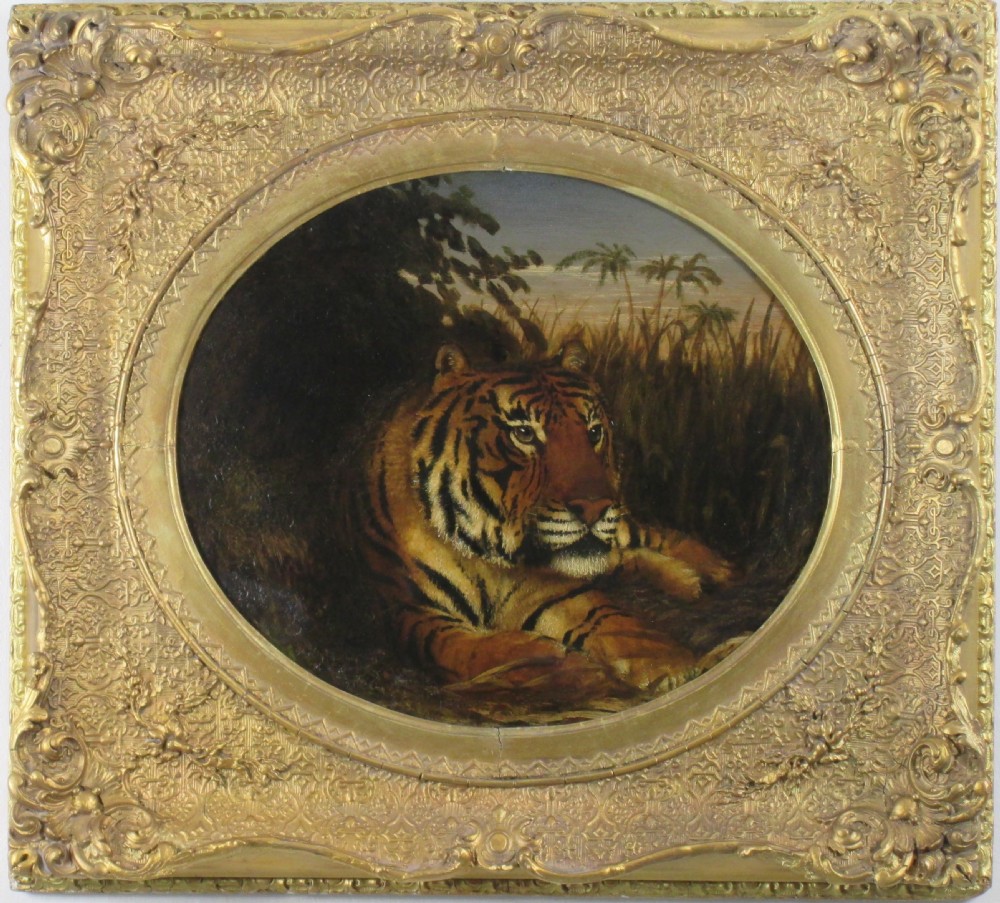 I would loved to have seen Bodlondeb in it’s heyday with all the family present, they had visitors such as the composer Sir Edward Elgar & prime minister David Lloyd George. Queen Victoria apparently expressed a desire to stay at Bodlondeb, but the house was too small to accommodate her!

After George Swinford died in 1906, Mary Jane Eliza continued to live at Bodlondeb with brother in law Albert, during his life he was a JP for Chester & the DL (Deputy Leit for Carnavon (High Sheriff 1884/5) when Albert died in 1935 & then Mary Jane Eliza the following year the Council in Conwy purchased the property. The house then became the offices of Conway Borough Council. Now it’s the headquarters of Conwy County Borough Council. It features a debating chamber. Additional offices were created in an extension designed to complement the original house. 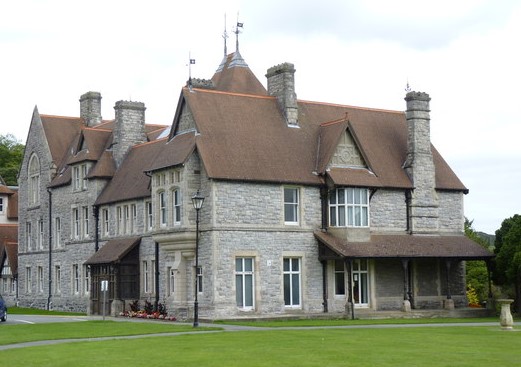 The park at Bodlondeb, a stone’s throw from the town walls, is an important recreational area for locals and visitors. It’s home to Conwy Cricket Club & hosts the International Bluegrass Music & Dance Festival each summer. Marine walk there was built by Albert as a highway & there are public trails through the woods, where the trees include native oak, birch, ash, beech, Scots pine, cherry, yew and evergreen oak. Inside the woods is an unusual alley of holly. I would just love to go & visit next time we are wandering that way!                        Bodlondeb translated is Contentment, how lovely.

When looking for information about the family I found such a lot of different interesting things that it’s impossible to put everything in a blog! One thing I did find was that after Mary Jane Eliza’s death in about 1836 the family dedicated a beautiful stained glass window in the Church of St Mary & All Saints, Conwy, the window is perhaps the work of Burlison & Grylls. An open book at the top of the window has the Welsh text ‘Yn y dechrae ydd oed y Gair’ (In the beginning was the Word, John 1: 1). 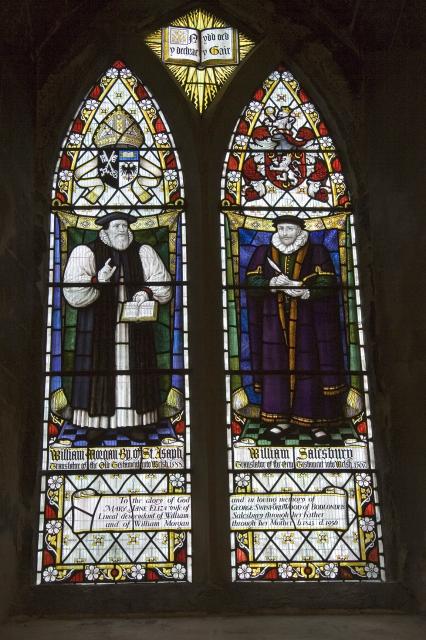 The window picture above was given in memory of Mary Jane Eliza, she was descended from both men depicted, from William Salesbury (Salisbury) through her father & William Morgan through her mother. William Morgan is extremely famous! He was a Bishop & Welsh scholar. Morgan was born in Cardiganshire and sent to St John’s College, Cambridge. In 1575 he became vicar of Welshpool, moving in 1578 to Llanrhaidadr Mochnant. He then undertook to complete the translation of the Bible into Welsh, begun by William Salesbury. The edition, including a revision of Salesbury’s New Testament, appeared in 1588. Morgan was made bishop of Llandaff in 1595 and promoted to the slightly wealthier seat of St Asaph in 1601. (After researching several different variations of William Morgans life & family history, my theory is that he may have married William Salesbury’s daughter, but there are so many theories on his descendants it’s hard to tell for sure) If you are interested in William Morgan here are two links with more info here, including his Birthplace, now owned by the National Trust.  William Morgan Birthplace NT     ,More history about William Morgan, History Of Snowdonia

Now back to our Photos, this last week I have been putting some of the unnamed ones on Twitter & Instagram, but here are a few of the ones written on the back, some have names that I have joined with people on the tree…On board the Yacht ‘Myrtle’ in Malta in 1882 are George Swinford and Mary Jane Eliza, then on the right Caroline, who is MJE sister who married John Keppel Jones. 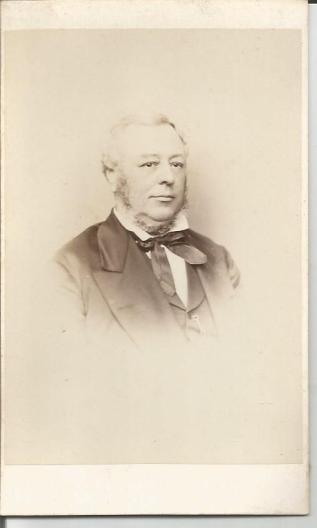 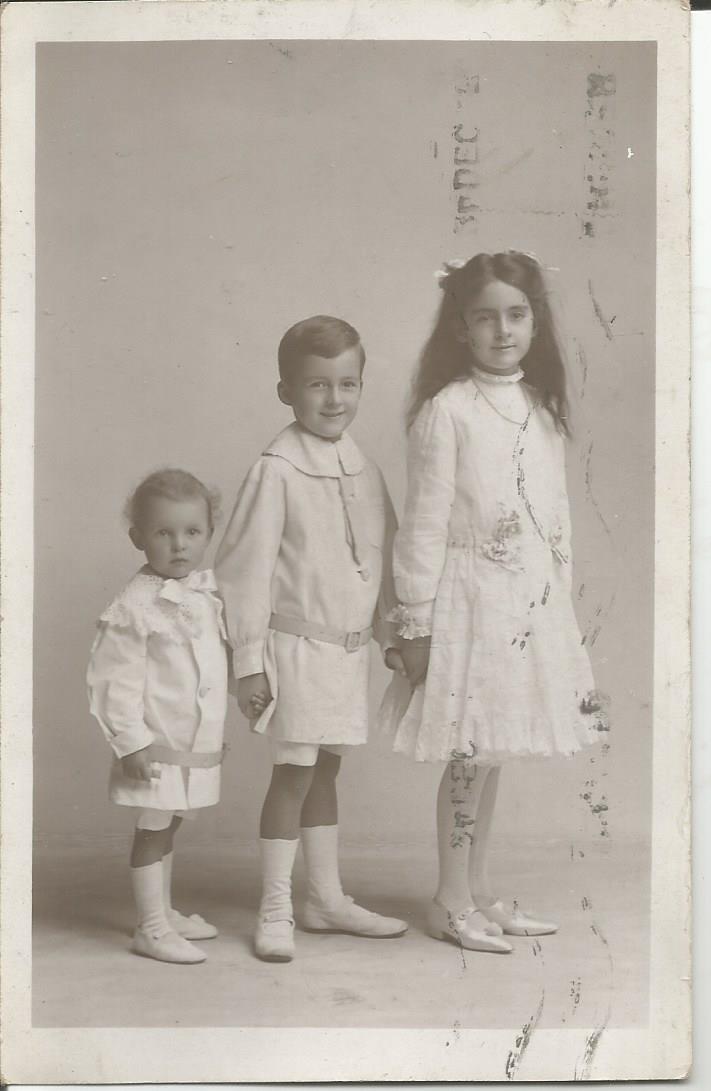 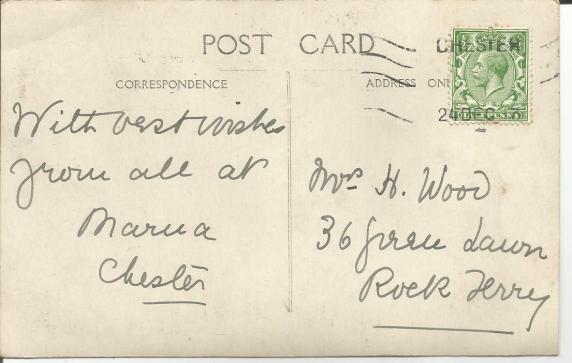 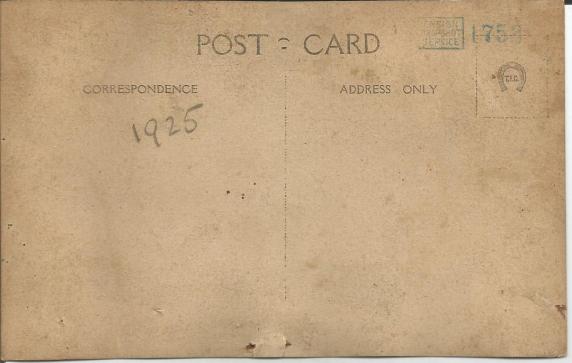 Centre row are MJE parents Enoch Gibbon Salisbury & his wife Sarah Jone, the daughter of the fairly famous Minister Rev Arthur Jones, he also baptised MJE (his Granddaughter) on the Baptism I found in the envelope. The bottom two photos I’m not too sure about, but aren’t they lovely! 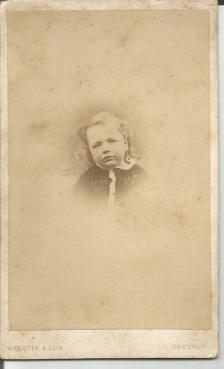 The first CDV obviously from the Jones family, MJE mother’s side, & the little boy I think is most likely to be Albert b1871, MJE’s son. 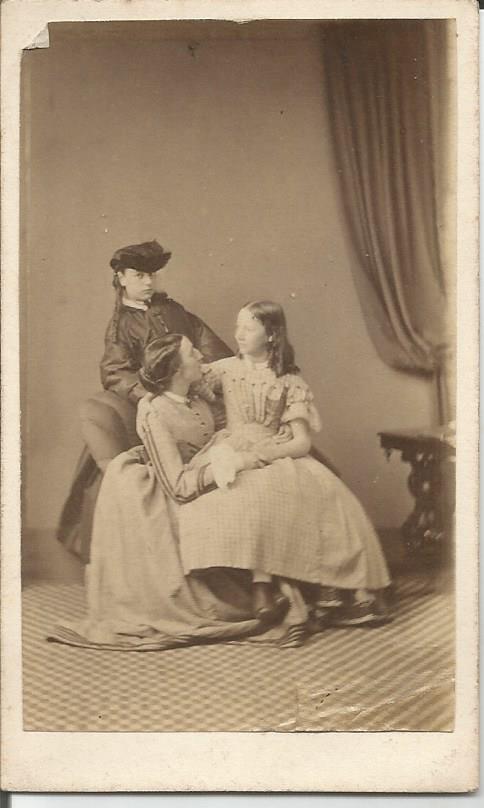 I love this CDV above, there are a couple of possibilities, but I’m not sure yet who they are…Thank you to whoever wrote on this below George Swinford Wood 1872..Fabulous! 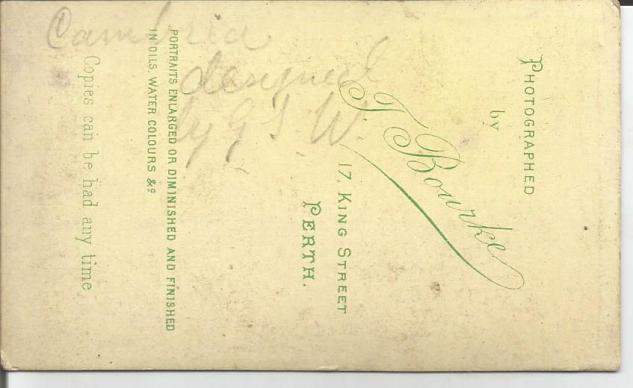 I have found nothing about the Cambria, designed by George Swinford Wood. 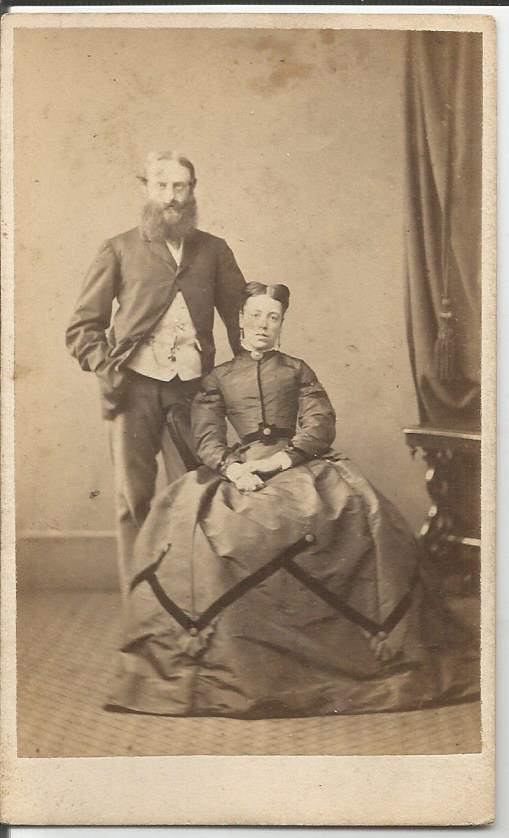 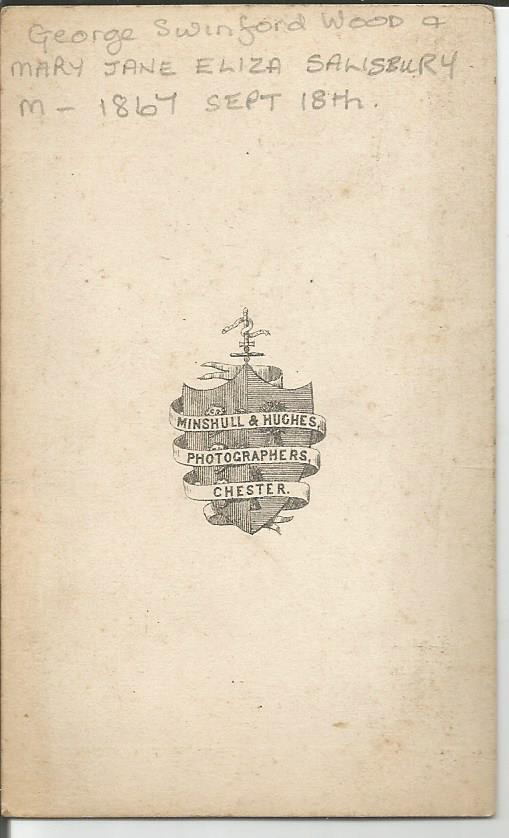 This last one is my favourite &  really brought a gasp from me because I now had a photo of the couple I believe at the time of their marriage, although not written on, George Swinford is unmistakable! I have written on it now, just in case! Wonderful to see Mary Jane Eliza as a young woman..I absolutely love it!

I have other old photos in this Salisbury Collection to share with you all, that will be the next blog. Among them are some Military CDV’s written on, research needed!

The family tree I have compiled for the Salisbury & Wood family on Ancestry, they are a super family & I have added notes on some people..Link here below, you can access Ancestry for free if you register.