This smashing old photo says on the back.. “Mr Chignell’s School, Dover” & ” X FEP” This photo below is of Castlemount, Robert Chignell’s main school, that he is most well known for……But who is FEP ? The young man with the hat on his knees ??

“Castlemount was built in 1876 by Mr W J Adcock for Mr Robert Chignell, to accommodate the school he had originally opened on the site of Dover College. The house was a substantial mansion with many gables, built of red brick with stone embellishments. The main entrance to the property was from Laureston Place. After the house was completed, Mr Chignell had the grounds terraced, with lawns and the perimeter planted with trees, and in a few years the barren hillside assumed a park-like appearance.          On certain days during the summer Mr Chignell opened his grounds to the public, and it was the public appreciation of this privilege that suggested the idea of Connaught Park. Mr Chignell eventually left Dover and by 1891 the preparatory school for boys was being run by Reverend Thomas Chirol. In 1911, it was taken over by French monks known as Les Frères des Ecoles Chrétiennes who came to England because of an anti-clerical movement in France and established it as a training centre for teachers.”

According to this  site… I found that Robert Chignell operated his School here in Dover before Castlemount was built in 1875, great pics & info found on Dover here and now  See Below….

“Built as Mount Ellis in 1865 for Joseph Joel Ellis, a coal mine owner from Leicestershire.  The architect was Roland Rees and the builder was Philip Stiff.  Opened on 12th May 1865, the foundation stone was laid by Mrs Ellis and the Reverend RI.Cohen. The ceremony was recorded on was written on a scroll in Hebrew and together with coins of the period were placed in a vase , then placed in a cavity of the foundation stone. Mr Ellis lived in the property for only a few months, being taken over by Robert Chignell as a school for boys until Castlemount School was built in 1875.  Since then it has been used as Dover College Junior School and currently adult education centre.”

There is also a great deal of super information, more about the Castlemount School too here at      The Dover Society     Also another mention of Robert Chignell here on the Dover Historian Blog

There are lots of references to Robert Chignell on the Newspaper Records on Find My Past if you have a subscription. He was very vocal about Dover matters & often wrote to the Dover Express. here’s one below that the paper spoke about, Robert not being very complimentary about Dover residents ! This on New Years Eve 31st December 1869.

I have traced Robert’s life stating with his Baptism, but mostly on the census records..See below…

Robert Chignell married Marion Street in Pancras, London in the 3rd quarter of 1863. By the time of the 1871 Census below they had 2 daughters, Marion Elizabeth aged 4 and Ethel Agnes aged 2. Robert is described as a Principal of a Private School.

Robert Chignell died in March 1925, aged 87 in East Preston, Sussex. I found this newspaper clip from the Dover Express. 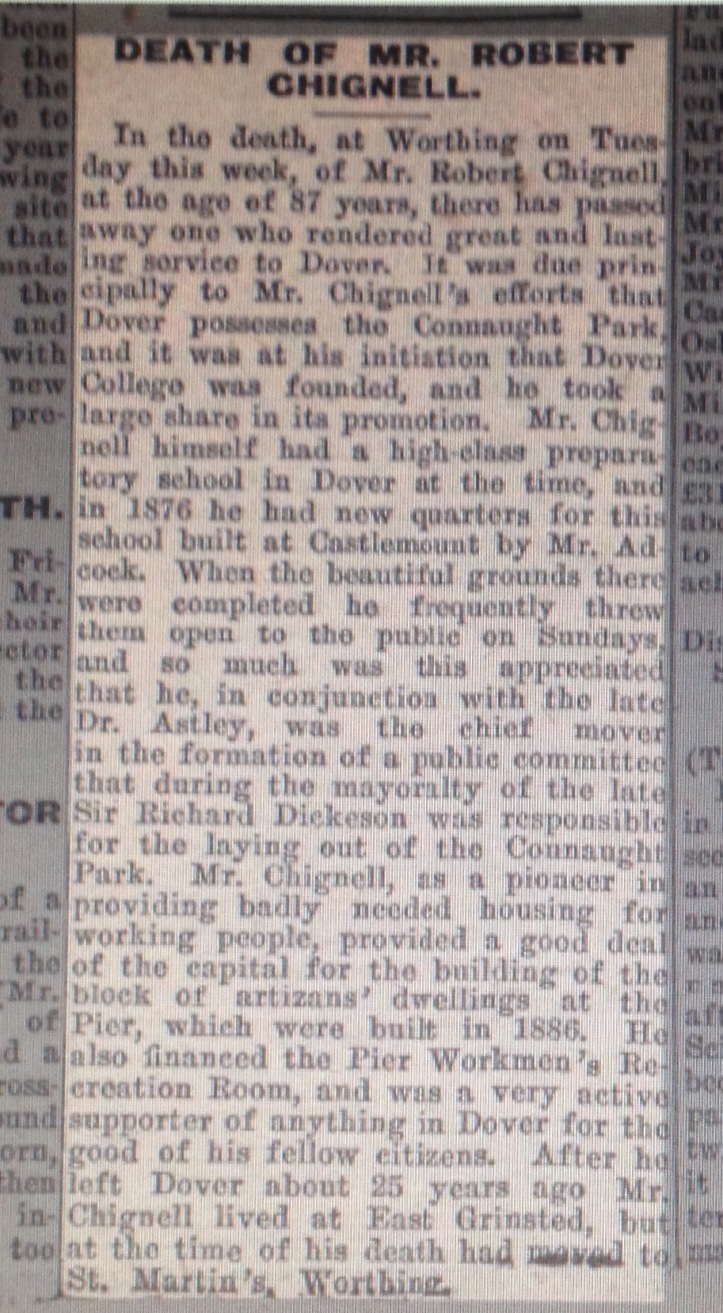 Information in this about clip confirms he left Dover about 1900.

Just a couple of census records ..See Below…for his wife Marion Street in 1851 with her family..She had lots of siblings ! Love her Fathers name George Horatio Street, he was a Bookseller, Stationer.

If anyone knows who the young man on the photo, marked with a cross F E P could be,  I would love to know. Is there anywhere online with records of pupils ?? Or do you have access to the old school records, if there are any ?? It would be great to find out who he is !