I don’t deliberately go out of my way to buy Military old photos or ephemera, because I would rather leave it for someone else, that knows more about the subject. But for some reason this little Album took my eye. It had a label on the cover ‘Royal Sussex Regiment on Active Service’         But it wasn’t until I looked at it more closely when we got home & I was  reading the captions on the photos, that I realised I had to do some research on it.   I just couldn’t let these men be forgotten.There are 33 Photos in total….Descriptions of each photo hand written in the Album I will post in Red…. 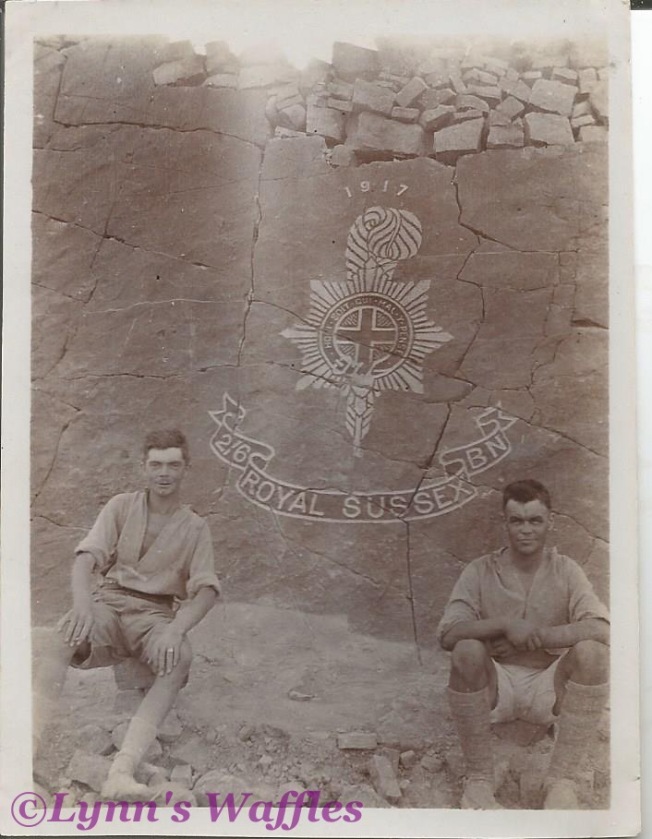 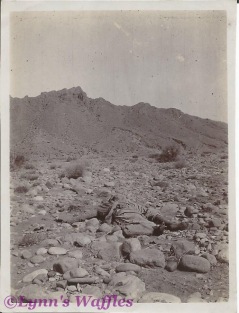 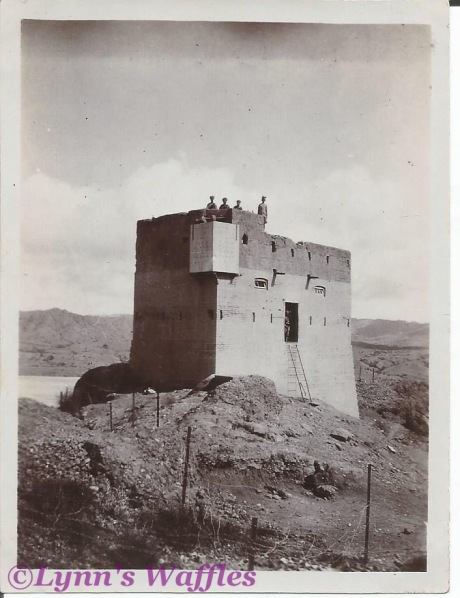 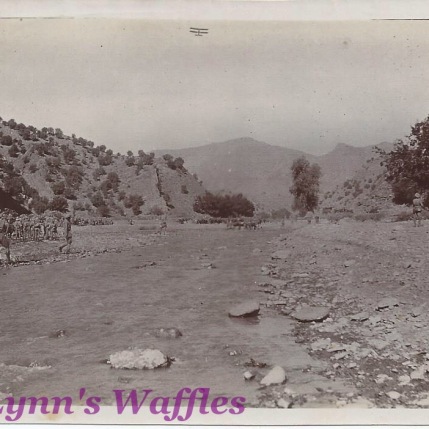 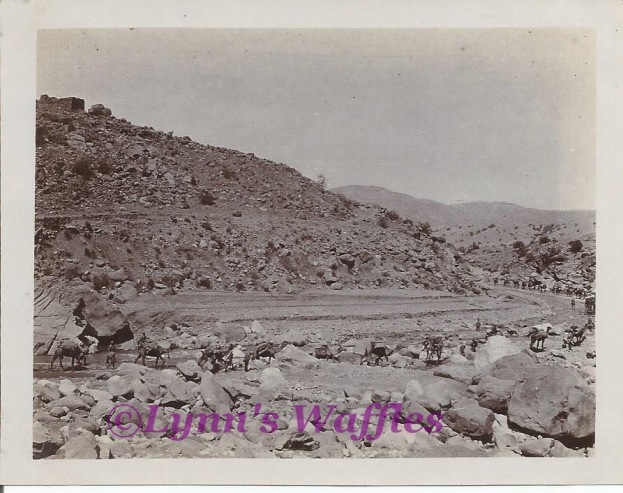 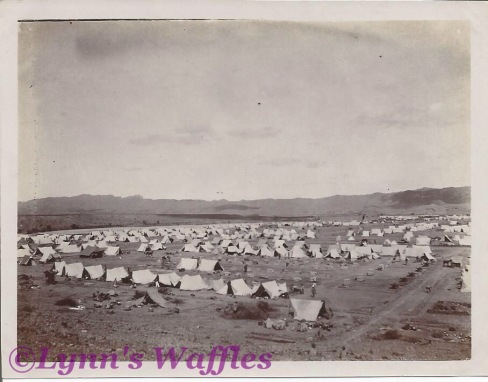 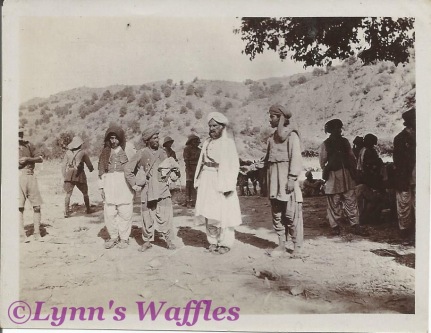 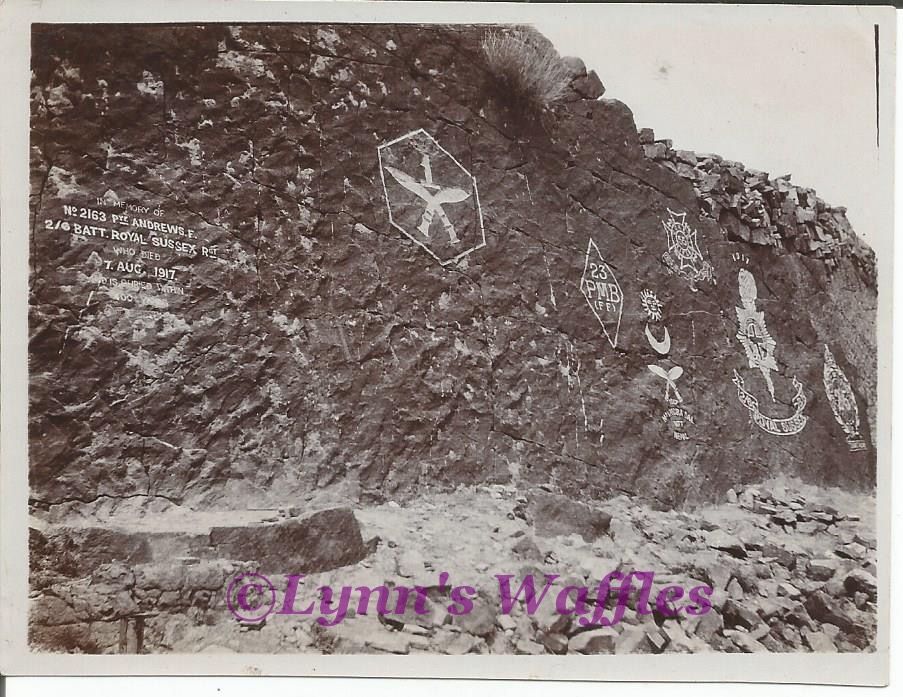 First a little about this battalion of the Royal Sussex Regiment during WWI..2/6th (Cyclist) Battalion was formed at Brighton in November 1914, in November 1915 they moved to Chisledon, and  joined with three other Cyclist Battalions – 1/9th Hampshire, 1/25th London, and 1/1st Kent Cyclist Battalion, and converted to infantry…..This ‘Brigade’ was originally intended for East Africa, but on the 4th February 1916 they sailed from Devonport to India. Which is where the photos in this Album were taken…..
In October 1918 they were moved to Vladivostock, and then into Siberia, where they remained until November 1919 before returning back to England.
Some troops formerly with the Canadian Reserve Cyclist Company (aka 2nd Div. Cyclist Co.). are known to have been transferred into this battalion too.

These images above are Herbert (b1881) in the 1891 & 1901 census with his father Henry (b1855)  & brother Ernest William (b1883), also Ellen Palmer, unmarried. Henry’s sister in law has moved in with them as Housekeeper, after her sister, his wife had died. In the 1891 C you can see that Herbert was a Barrister’s Clerk & a Stereographers Clerk in the 1911 C, before he joined up. His brother Ernest was a footman for Sir Robert W Perks, Liberal MP in Kensington in the 1911 C.

Albert’s father Richard & Mum Martha Margaret (Gould) married on the 8th May 1889 in Paddington, he was 39 & she was 32.( Richard & his parents & many siblings all came from the Cumberland in the Lake District, his father was a Nail Maker & Baker & Richard himself was a Pencil Maker until he moved South.) The couple had five children (their first Lily died at age 4). Lily Louisa Marguerite b 1890-d1894. Richard Arthur William b1893. Albert Edward John b1896 and his Twin Lilian Alma Marguerite b1896 (Named after their first little girl) All four registered in Christchurch, Hants, then Thomas Henry Francis b1898 registered in Reading, Berkshire. Father Richard was a Publican, Owner of a cafe & a waiter, at different times after he left the Lake District to live. First Image below is the White family on the 1911 census before WWI………….

Two images above…The first image above is taken from UK, De Ruvigny’s Roll of Honour, 1914-1919 on Ancestry. The second also from Ancestry is Soldiers effects register for Albert.

His father William Richard Andrews married Edith Eliza Purkis in 1892, Portsea Island, Hants. They had five children Edith Dorothy b1894,  William Frederick b1896, Eric Bernard b1898, Constance Mary b1903 & Lilian Marjorie b1905. Family all together here in 1911C….first image, then second image is of the Soldier Effects register………….. 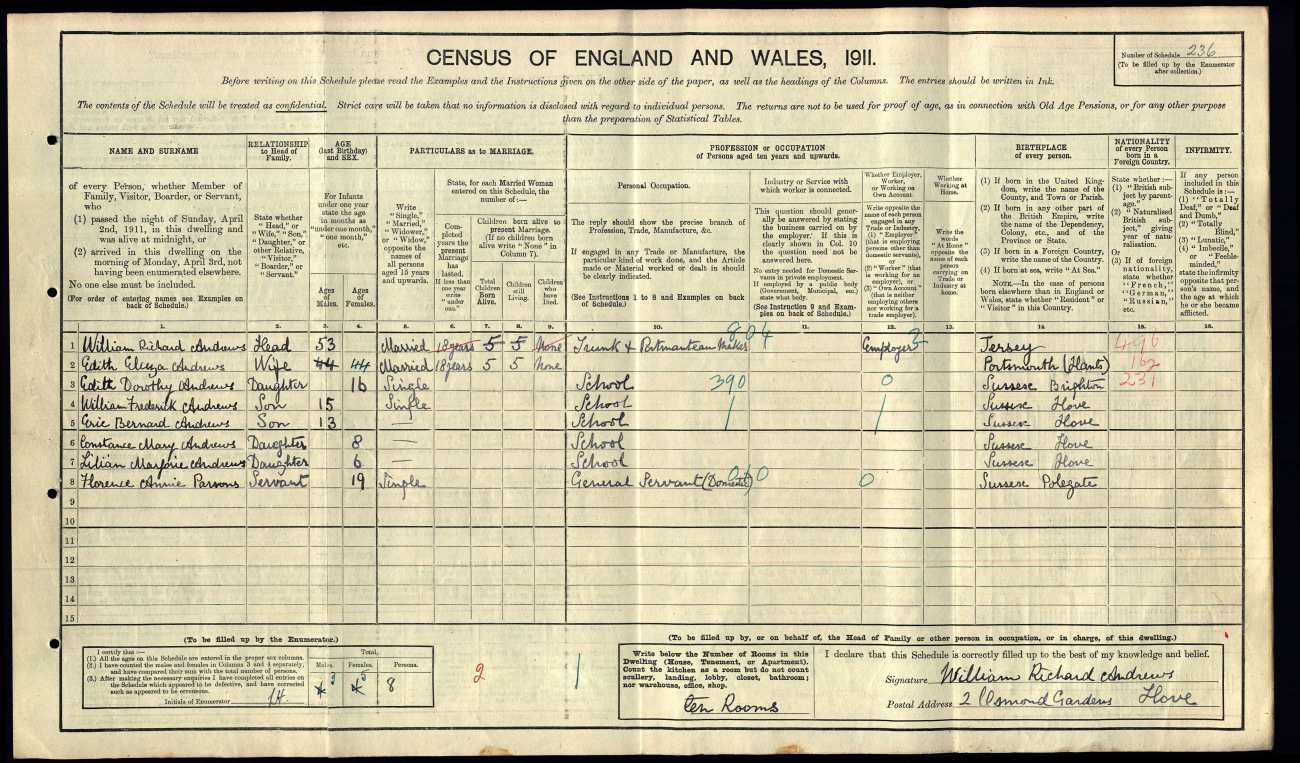 Now we go back to the beginning of the Album..photo no 2. ‘The tablet records  the murder of Major Todd by Mahsud April 1914.’ The writing in the Album is sightly confusing Todd or Dodd ?..it was in fact for a Major Dodd..not Todd..But I found it ! 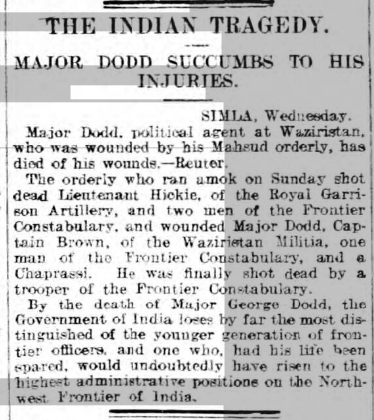 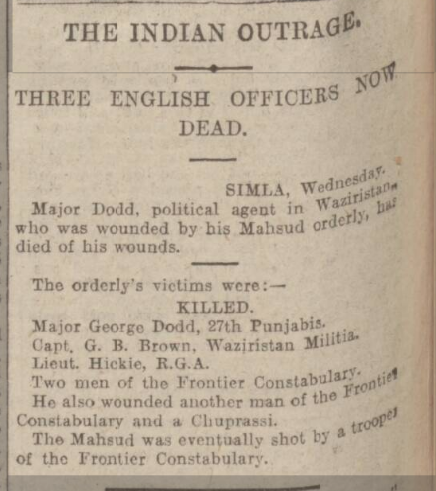 Above are the newspaper reports from the time..It seems he was injured by gunshot & expected to recover but suddenly died from his wound in the thigh..     Major Dodd was in the 27th Punjabis..Here’s a little info about them…*The 27th Punjabis were an infantry regiment of the British Indian Army. It was raised in 1857, as the 19th Regiment of Punjab Infantry. It was designated as the 27th Punjabis in 1903 and became 3rd Battalion 15th Punjab Regiment in 1922. In 1947, it was allocated to the Pakistan Army, where it continues to exist as 11th Battalion The Punjab Regiment…..Subsequent to the reforms brought about in the Indian Army by Lord Kitchener in 1903, the regiment’s designation was changed to 27th Punjabis…..During the First World War, the infantrymen served on the North West Frontier of India, Egypt, France and Mesopotamia. The regiment raised a second battalion in 1918, which was disbanded after the war.* This info from Wikipedia..  Major Dodd was born in India… In his will Major Dodd left everything to his sister Margaret (also born in India) , who was married to a Colonel in the Norfolk Regiment, Godfrey Massy (Born in Ireland)…..

The politics of India and the history of the Military in the country is extremely complicated, I shall leave that for the experts..but here is just a little information about the Mahsud Tribe….Mahsus Tribe Mahsud Tribe of India    Mahsud Tribe info from Wikipedia.

According to figures produced in the 1920’s by the Central Statistical Office, total British Army casualties were as follows:
Total killed in action, plus died of wounds, disease or injury, plus missing presumed dead:
956,703….of which Royal Navy and RFC/RAF casualties were 39,527…..of which, from the British Isles were:   704,803    and from Canada, Australia, India and other places: 251,900    Total British Army deaths in France and Flanders:    564,715   of which 32,098 died of disease or injury.     Total British Army deaths on the Gallipoli front:    26,213
Total British Army deaths on all other fronts:   365,375…..  An awful loss of life..and this is just one war ! Add to that the men & women who came back injured in one way or another, and the many who were affected by these losses, family, friends….. and the cost to human life is beyond words……………