These named old photos were among a box of cabinet cards and CDV’s all from one seller. He said they had come from different sources and what he had had left, he just put in this box. My husband done his usual haggling and we got the whole lot for a great price! Over 80 in total, all mixed. But when I have come to sort them, several were named on the back, all belonging to the same family..Kemble..with a connection to Devon.

Mary Ann, now a widow in the 1871 census, just had her youngest son Robert still with her, aged 10.
In 1881 Mary Ann also had another son Samuel back at home, Samuel was 27, a carpenter, Robert was now 20 and a labourer.
In the previous census 1871, Samuel had been living locally as a servant Carpenter aged 17, head of family was a Carpenter, so I wonder if he was an apprentice…
In the 1891 census I was unable to find Mary Ann, so I assumed she had died…
Son Samuel was now married and living with his wife and family in Cheriton Bishop, Devon.
Son Robert was also married, with a young family, but was now living in Glamorgan, Wales, and was a servant, Stone Mason. Head of household was a Railway contracter, so was Robert an apprentice also?
While looking for Mum Mary Ann’s death record, I found that sadly she had entered the Devon Asylum in Exminster on 7 January 1890 and died there on 15 February 1890. See Below..Click to enlarge..

Eldest son William (Pic 1) went down a very different path in life..
In 1865 he married a lady called Mary Toley (Pic 2..Below) 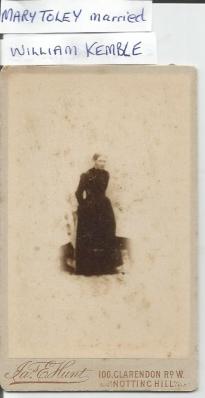 There were members of the Kemble family living in the London area, so I assume Mary had her photo taken on a visit there…
William and Mary had eight children that I can find..John b 1867, Annie b 1869, Emily b 1870, Mary b 1873, William b 1875, Elizabeth b 1877, Jane b 1879 and James Toley b Aug 1880.
There are an awful lot of Kemble family to be found in Devon and London areas, so I can only best guess some of the people and dates..if you were researching thoroughly, you would need to get many certificates to confirm everyone, as the family used a lot of the same names for members, so lots of cousins all born about the same time have the same names…and you would need to establish the correct parents for each…
So back to William and Mary..here they are on the 1871 census in Northleigh, Tedburn St Mary.

William (30)  is training to be a Policeman with Devon County Constabulary.
Although his father John was a labourer, it also says on William’s marriage certificate that he was a Bailiff, so could he have been a Farm Bailiff or a Court Bailiff ? Maybe this is why William chose a profession in law & order.
In the 1881 census William and Mary with family in Thorverton, Devon (about 12 miles from Tedburn St Mary) This time he is a County Police Constable, there are just 6 children listed on the census, the 2 eldest missing.
John is a servant (page) aged 14, working for a Mr Clapp and his family in Exeter, Mr William Clapp is a fellow of the Royal College of Surgeons in London.
Annie is just 12 years of age and working as a General Domestic servant for a Farmer Tom Babbage Plucknett, who lives just a few doors away from William and Mary and the family in Thorverton.

In the 1891 census William was living with his family at the Police Station in North Tawton, Devon, he was now a Police Sergeant.
Sadly later that census year Mary his wife died.
Two years later in June 1893 William (52) remarried… a lady by the name of Ann Osborn Stoneman (b 1863) she was about twenty years younger than him. They married in North Tawton, Devon. They went on to have three children of their own..Phillip J b 1894 Ide, Devon. Lucy G b 1896 Ide, Devon and Harry b 1903 Ide, Devon. Strangely I found that William (59) was a Postman in the 1901 census..So I had to search for some records..found this record on a public Ancestry tree, and also other records of his time as a Policeman from 1865 to 1886…
But the last…a newspaper clipping explains a lot about the type of man he was !!

If you look at the first document you will see that he retired from the Police on 1st June 1893, when he married Ann Stoneman, so I would think that after the court application he came to an agreement that suited him. So that’s how come he was a Postman in 1901 ! mystery solved…….
He was retired by the time of the 1911 census…

Later that year on the 10th June he died….

Buried on the 18th June 1911. His home was listed as Primrose Cottage in Ide, Devon.
The other photos that were named are Pic 3..Bessie Kemble..below..who I believe to be Elizabeth Kemble, William and Mary’s daughter born in 1877.

This next one (Pic 5) has written on the back..’William or James Kemble’..
William their son was born in 1875 and James in 1880….So it could be either of them…see below

Last but not least is this very lovely Pic 6 of a Mum with her two children..and on the back is written
‘Polly wife of John Kemble with Ethel and Olive’
William and Mary’s eldest son John married a Mary ( also known as Polly) Taylor, their children were Mary Ethel b 1892 (1911 census, went to Avery Hill College, a teacher training college)
Olive Francis 1893 and John Albert Edgar 1897… So the date of this picture must be about 1896….

John Kemble moved away from Devon, following in his fathers footsteps, and way beyond..In the 1891 census he was living in Twickenham with his wife Mary (born in Ireland) listed as a Police Constable, in the 1901 census he was living in Lambeth, now with wife and three children still in the Police. But in the 1911 census below, the family are all living in North Woolwich. John is now aged 44 and a Police Inspector !!
Bet his life story is interesting…………..

One last bit of info I found, is of the obituary in the newspaper of Ann Osborn Kemble (Stoneman) William’s widow,  in 1949.
What a treasure trove of names for a family historian….

Once again with my research I have found so much information online about this family of Kemble…I could go on and on ………
Till next time then…….

UPDATE MARCH 9TH
Wonderful news ! this last week I was contacted by a direct ancestor of William Kemble, a lovely lady who had read this blog online, and for the very first time saw a photo of her direct ancestor ! and she has been good enough to share lots more info about this Kemble family with me, she wishes to remain private and the info of course…
But the very great news is that these lovely old Cabinet cards and CDV cards are now returned to their family, they will be handed down and cherished for future generations, as she also has descendants…I am very very pleased…what a great result…