Way back in November 2012 I wrote about and shared some family letters written to my uncle from a mate called ‘Bert’ So, my cousin, Sherlock Steve has been spending some time researching and trying to find out more about him and his family.

The letters were written to my Dads elder brother Daniel, who was born July 1897 in Clapham, by his Mate ‘Bert’ who I am certain is Alfred Gibbs but used the name Bert as a nickname. He enlisted in the 13th Battalion East Surrey Regiment (Wandsworth) in 1915, and after training, he was sent to France. I have not had much success with any records about him although I do, as you will see from the letters have his Number 13179.

There was nothing extraordinary about Bert or Dan or the letters for that matter, they were just two mates who it seems kept in touch throughout the war, I had no idea of how they became friends either. I thought at the time they were maybe school friends. My uncle Dan was unable to enlist because he had very poor eyesight due to having measles as a child, although he tried several times to be accepted.
War is all about these ‘ordinary’ blokes doing their duty, so it was lovely to read these, I hope you enjoy reading them as much as I do if you haven’t already, and have a little laugh at some of the things said. Some were a bit difficult to read, but I have written them up just as he wrote them, with *** on bits too faded to decipher.

Here’s the direct link to my original first of four Blogs: https://lynnswaffles.com/2012/11/07/world-war-letters-to-a-mate-from-bert-part-1/

All I knew about Alfred Gibbs, was his Regiment number and the letters he wrote to my Great Uncle in WW1, which Lynn told me about.

There was one record that Lynn had a copy of, Alfred’s Medal Roll.

After a bit of research, I was able to add to that. 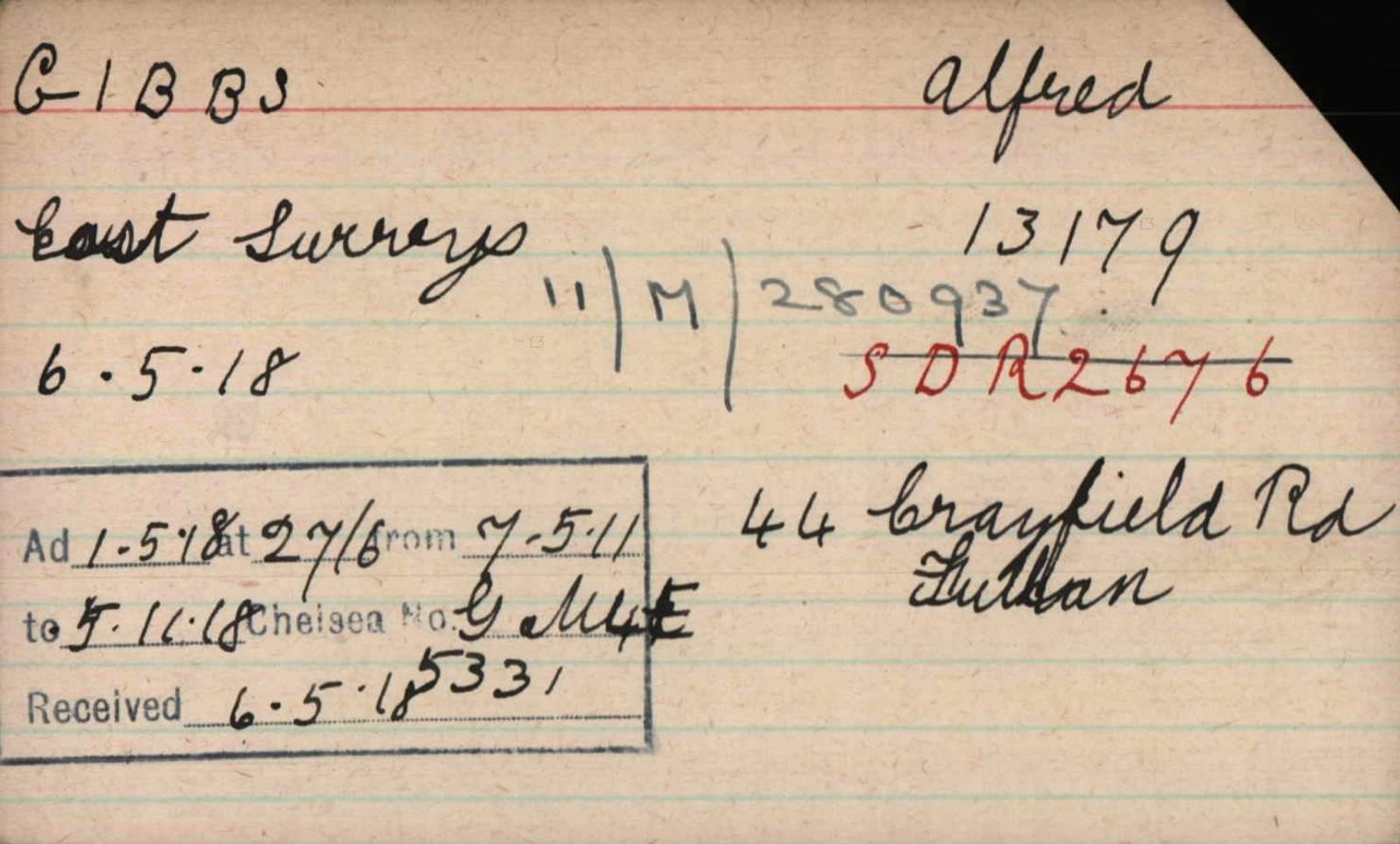 Using Find My Past Census Address search I couldn’t find the address.

I found a couple of likely candidates but my gut feeling was they weren’t correct.

Then I decided to try the newspapers after he had been discharged.

This led to the following story and opened up the story for Alfred Gibbs.

Reading through the article a few times, the areas I have highlighted in RED helped me pin down Alfred in the 1911 Census, largely in part to his ‘mates’ unusual name, HARRY GLOYN.

This gave me Alfred’s year of birth as 1900 and place of birth Wimbledon, Surrey.
(Where his mother lived according to the press article).
Alfred is highlighted in BLUE.
On the same page, highlighted in RED is Alfred’s brother FRANCIS GIBBS.

Below is a link to their website and various articles regarding pupils who fought in WW1. (A very interesting and eye-opening read).
Kingham Hill in the Great War – Kingham Hill School

Getting back to ALFRED.
Having a brother on the same Census enabled me to find their parents.

Their mother’s maiden name was CHAMBERLAIN.

By cross-referencing I found a Parish marriage between a GIBBS and CHAMBERLAIN in WIMBLEDON.

Using this information, I found out that Alfred also had two sisters.

I then found Alfred in the 1901 Census at 32, Hartfield Crescent, South Wimbledon, along with his father, mother and sister Alice.

By this time Ellen Mary had died.

In the 1911 Census Alfred’s mum was a widow and working as a cook at the house of FRANK LAURIER, a colonial merchant, living in Wimbledon.

The other two children were: –

In the press report of 1919 it states that Alfred’s mother had died by the time he returned from France.

Indications are that Mary died before the first letter that he sent to Dan in 1915.

One of three transcription entries for 13179.
WOUNDED July 1916, NEXT OF KIN FULHAM.

Who was at 44 Crayfield Road, Fulham in 1911? Was it close to Lundy Street, Fulham where our family lived? There has got to be a link between the families because of Fulham I feel. Either through Bert and Dan’s sisters or some other way. Hopefully we will find this out eventually. Steve hasn’t been able to find Crayfield Road

This link tells us that Lundy Street became John Street after 1912 but no match for Crayfield Road:

What a splendid job Steve has done with researching Bert, and I do feel sure he has found the correct one don’t you think? Such a detailed Newspaper report, Newspapers are always such a rich source of information for Family History.