My lovely cousin ‘Sherlock Steve’ has been delving even deeper on the https://www.library.wales/ in their Newspapers section. I think I’ve shared this resource before but always worth a second share.

While researching my own Welsh roots on the National Library of Wales (NLW) I came across our old friend Isaac Padfield / Wyndham Stuart Padfield, in newspaper articles, which I expected to as Isaac was apprehended in Penarth.
What I did not expect to find was the sad, countrywide story that finding a newspaper article on Anne Padfield would bring.
Stories of infanticide, seduction and the morality of Victorian life.
Depending on which papers you read at the time, depended whether you would feel sorry for Anne or not.
Some things don’t change.
This was the first headline that caught my attention :- 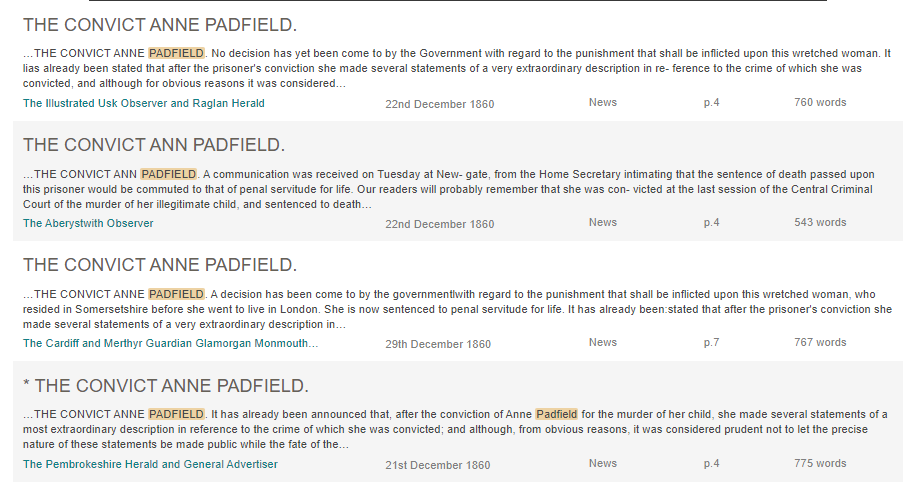 I just had to research her especially with the Isaac Padfield connection.

Reading through 100’s of press reports and I mean 100’s I was able to gain some basic information and build a family tree and timeline for Anne.

As mentioned in court Anne came from Somerset (So did Isaac Padfield) and gave her age as 23 at the time of her arrest in September 1860.

Other information in the press gave me her brother’s name as George Padfield and that her father was dead.

By following George Padfield through the Censuses and his marriage to Mary Parsons, I was able to reach, what I believe to be the correct Anne.

Knowing her parents, I then found the 1841 Census Entry.

The family are living in Midsomer Norton, Somerset. As can be seen Anne is now entered as Hannah and her mother is now entered as Isabella. George on the entry is the brother whose wife, Mary, is the witness at Anne’s trial.

In 1854 Anne’s father died in a mining accident.
This is the article of the Coroner’s Inquest on Saturday January 27th 1855.

By the time of her father’s death Anne had become 1 of 9 children.
At least three having died before the age of 3.

On 14th October 1855 her brother George got married to Mary Parsons in Trevithin, Wales.
Whether Anne attended, we will never know.

When asked where the baby was, Anne replied she met her sister and she is taking care of him in Somersetshire.

The letter was produced in court on 20th September.

This was the first press report that I read. It is from
‘THE SUN, LONDON, FRIDAY EVENING, SEPTEMBER 21, 1860’

There was only one paper I could find that printed two of the letters found in Anne’s possession at the time of her arrest.
‘THE MORNING ADVERTISER, FRIDAY, SEPTEMBER 21, 1860’.
The letters were stated as being ‘almost unintelligible both as regarded the writing and composition’.
The print quality was poor so I have transcribed the letters.

“MY DEAR SISTER AND BROTHER, –I am very hard to write to you for the end of my life, I have suffered for my dear child, and I cannot no longer bear it. This is my last letter to you. You cannot imagine what my feeling has been since I laid in your bed with my child by my side; I prayed to God, then he helped out of my troubles; a few more days and I shall be no more – it is hard to be parted from my dear child. I was almost driven to do this before now. I must come and see you before I can – and then I shall not be long before I shall be no more in this world, but I shall know my doom in the next. I trust that God will pardon my sins, and soon take me to rest. I have heard from my brother once, and that is all. Dear friends, when you get this letter my life will be ended. I shall be dead when you are asleep – cold, like a lump of clay. You will think about me, but do not make a talk about it – my misfortune – or I shall not rest in my watery grave. I have prayed to God to forgive me for all I have done in this world, and I think He has. I have wrote to your sister, and told her what I shall do. I must close my last letter. Give my kind love to Mrs. Thake, Mrs. Williams, and James Bradley. Give Bessy some kisses for me. This is my end. Farewell James and my dear Maria —-, I must go and see your dear sisters Bessy and Ann before I die, and thank them for their kindness to me and my sweet child. I love my child. Cannot write anymore. My heart is broken. Good-bye.                                                             “EMMA EMMA”

“Written in bed
“MY DEAR MISSUS AND MISTER,– I take a great liberty to write to you, but it is the first and last time that I ever shall write to you. I hope that I shall meet you where parting will be no more. – My dear friends, this is what I said before I became a mother, but I wanted to see my dear child, now I have seen and heard him as well —– am thankful to you for minding my dear sweet child, more to me than my own life —– I must tell you that I can bear it any longer —– to be separated from my beautiful boy —- I cannot live —- I have prayed that God would forgive me for bringing such a beautiful boy into this world —- and could not keep him, the day I gave him up was more to me than the death of my father —- my dear friends do not make a take on about me —- I shall be dead, yet my soul will be alive —- before this misfortune happened to me —- I have settled everything about my child, and if I had him I could eat him —- Farewell, when you get this I shall be lost in the waves of the sea —- “.

There was a cry for help and nobody to listen, except her mum.

The final sentence in the paper read:
“Among the letters found in the prisoner’s box, was one from her mother, alluding to the birth of the child and offering a home.”

I know we have all read and heard about the Victorian era and the plight of unmarried women with illegitimate children, but reading the above letters many times, really did bring it home to me how bad things really were.
I actually found them very upsetting.

The press reports just seemed to be never ending.
One would report Anne as a “wretched woman” while another would blame the Government for lack of support for unmarried mothers and not getting the father’s to pay for the child’s upbringing.

I personally did not realise how bad infanticide was in the Victorian Era until I started this story and starting read the reports in the press.
I’m not exaggerating when I would say that every day there would be a report of a small child or baby abandoned.
Or worse still murdered.

We now move forward to the next press report and the introduction of more witnesses including the alleged father of Anne’s baby, Frederick Bryant.

This same report was in
‘THE REYNOLDS NEWSPAPER, OCTOBER 7, 1860’
With this headline

I now move forward one day and the introduction of a new witness, further examination of Frederick Bryant and a summary of the post mortem examination by Dr. Gay and then the verdict.

THIS REPORT COMES WITH A WARNING FROM ME, THAT IF YOU ARE OF A SQUEAMISH NATURE DON’T READ.

IT CONTAINS THE FULL DETAILS OF THE POST MORTEM AND AUTOPSY FROM THE SURGEON DR. GAY.

AND I MEAN FULL DETAILS!!

I know the Victorians loved sensationalism with full and gory details but a full report of a post mortem in the press?? Wouldn’t be allowed now.

After all the headlines and press reports the adjournment just warrants two lines in the London papers.

Reading between the lines in earlier press reports of the case this is where I think Anne was going to commit suicide.

Part 2 of the Anne Padfield story to follow soon…..