These headlines back in July were big news this year to the Family History and Genealogy world:

‘The cost of ordering post-1857 probate records via the government’s Find a Will service has been cut from £10 to just £1.50.

The price cut, which was introduced in a statutory instrument that became law on 22 July, will be in place for the next 12 months‘.

‘Find a Will allows you to search English and Welsh probate records from 1858 by surname and year of death.

You can then order a digital copy of the record, which takes up to 10 working days to arrive‘.

This is taken from the WDYTYA Magazine website back in July. Direct link here: Government cuts probate records costs In reality, because of the huge demand, the Wills have taken way longer than 10 days to become available to everyone, but I don’t mind, I have patience as they are so cheap!!

Apart from using this service for my own family Wills, I couldn’t resist tying up loose ends and ordering Mary Ansell and her family’s Wills, see my Blog on her from 17 July 2019: Mary Ansell Blog  So here they all are received in a digital copy and even when you have a person die intestate, as some of these did (without leaving a will) we now have more information about who administered and benefitted.

This is a Screenshot from my family tree on Ancestry of Mary Ansell and her family. 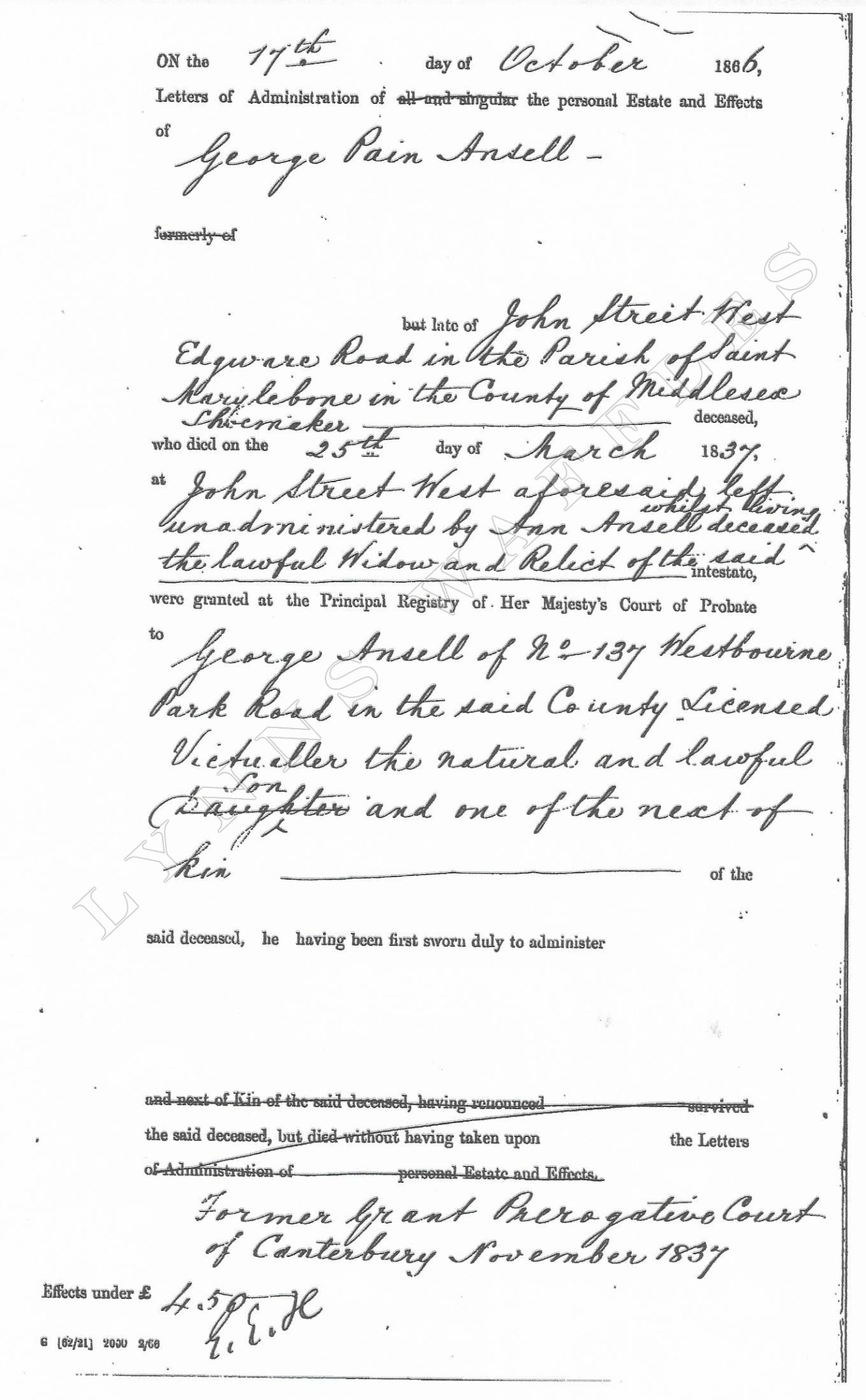 As you can see George Pain Ansell’s estate was left unadministered by his widow Ann Ansell (Sheward) his 2nd wife, so after her death in 1862, it was completed in 1866 by his son George, Mary Ansell’s Father. 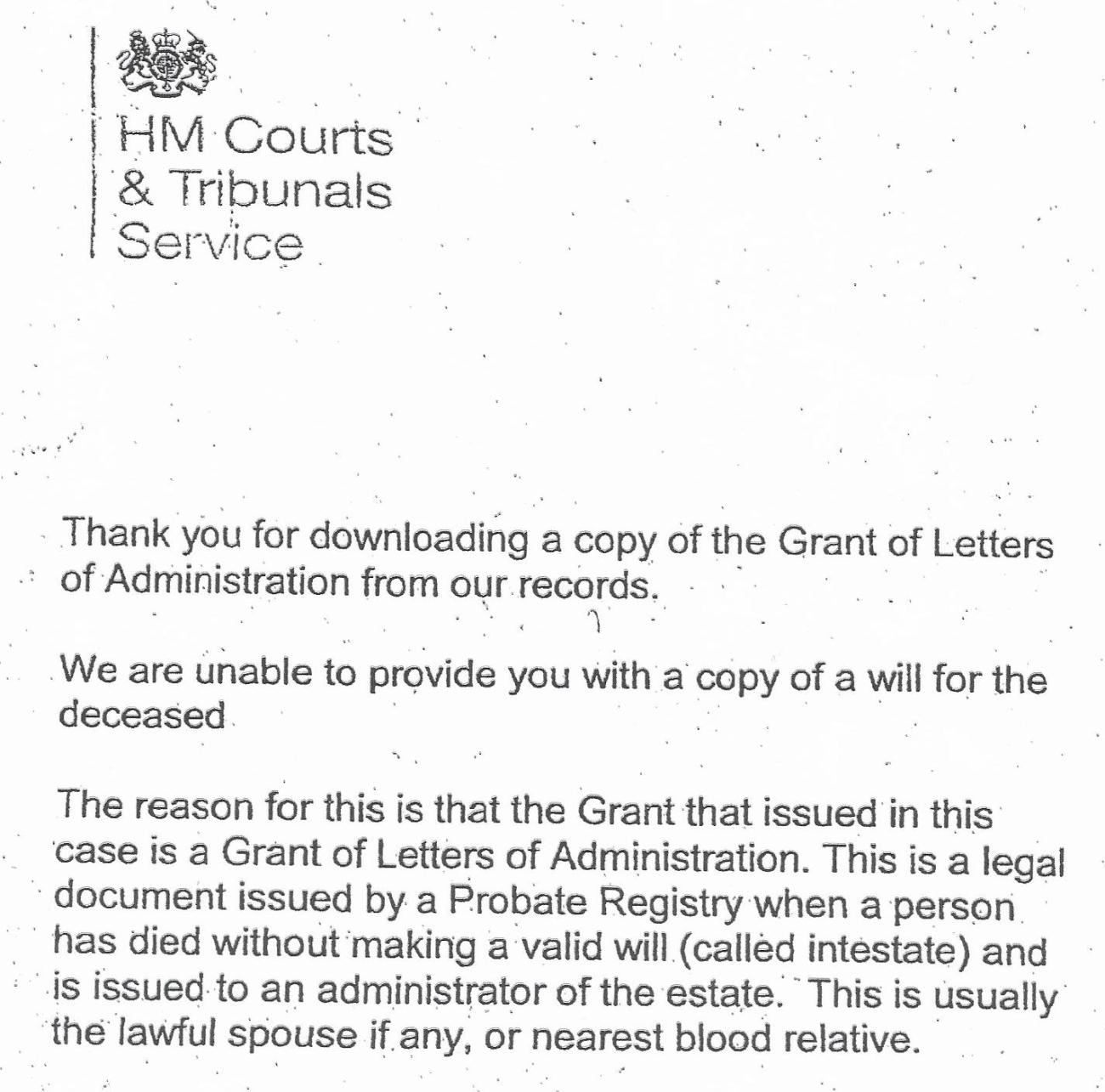 The standard letter above received digitally, due to a person dying ‘intestate’ without leaving a Will.

Still really interesting in these cases though, because as in this one above you still get to see who inherited and administered the deceased person estate.

Next, we have Daniel Kitchen 1796-1862 or in his case we don’t, which is frustrating, after waiting so long and not getting a result, I received this digitally, despite the fact that I have the image (Image 2 below) from Ancestry of his entry, so will follow that up in 2020.

Requesting a folio number but there isn’t one on the entry, unfortunately, so will follow up in 2020.

The image on Ancestry above, tells me that his wife administered his estate

So now we have the next generation George Ansell 1819-1875 Mary Ansell’s Father who was a Publican:

George Ansell was another one who didn’t have a Will and died intestate.

As you can see above the value of his estate administered by his wife Mary was close to £5,000 a lot of money back then in 1875 is equivalent in value to about £572,000 in 2019, mentioning Leaseholds, so he must have managed properties. 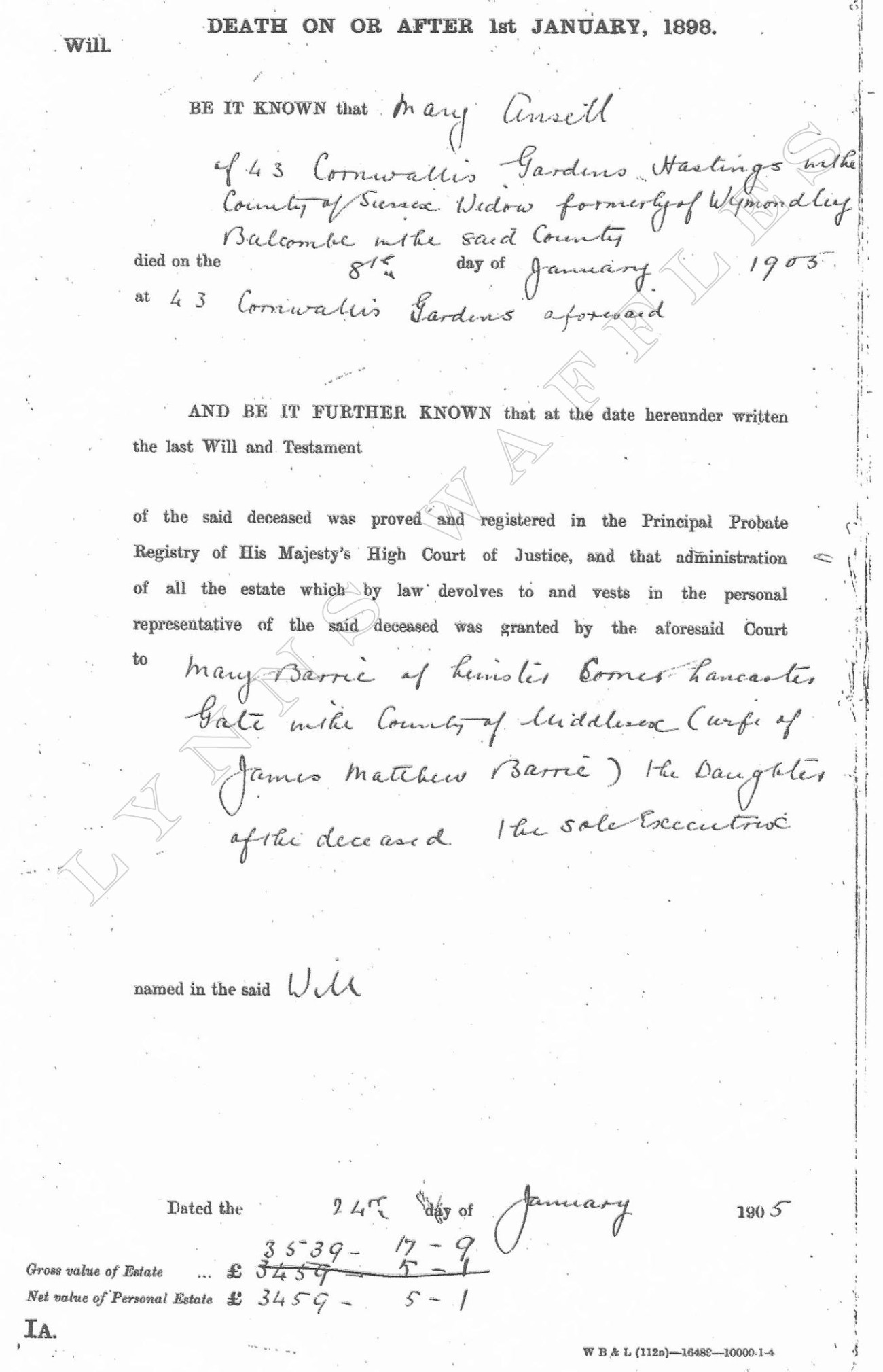 This Will above tells us important things and that is that George her son was obviously a part of her life as was Mary her daughter, but puzzling to see no mention of William? Her son Thomas had died in 1887, and I struggled with finding information about William and eventually found a likely death for him in 1909, but now I’m thinking did he die before or was he estranged from his family for some reason, I would dearly love to find out what happened to him, maybe I will have another look through the records in 2010 and see what I can find!

Lastly, we have Mary Ansell herself 1861-1950, who as we know from my original Blog died at home in Villa La Esquina, Rue Constantine, Biarritz, France. 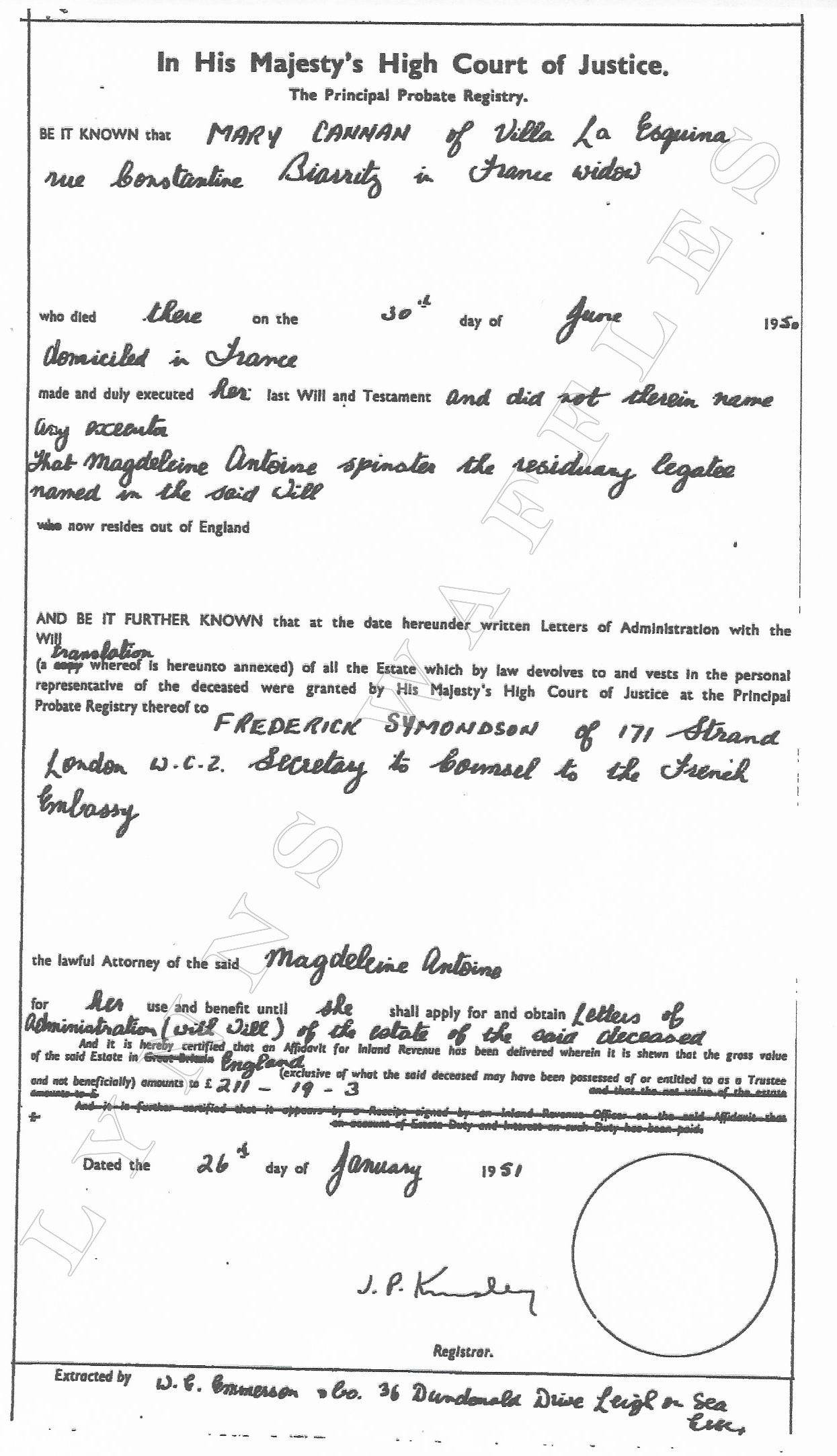 As she had no children she left everything to her carer Magdeline Antoine.

The Villa La Esquina is still owned by her descendants now. 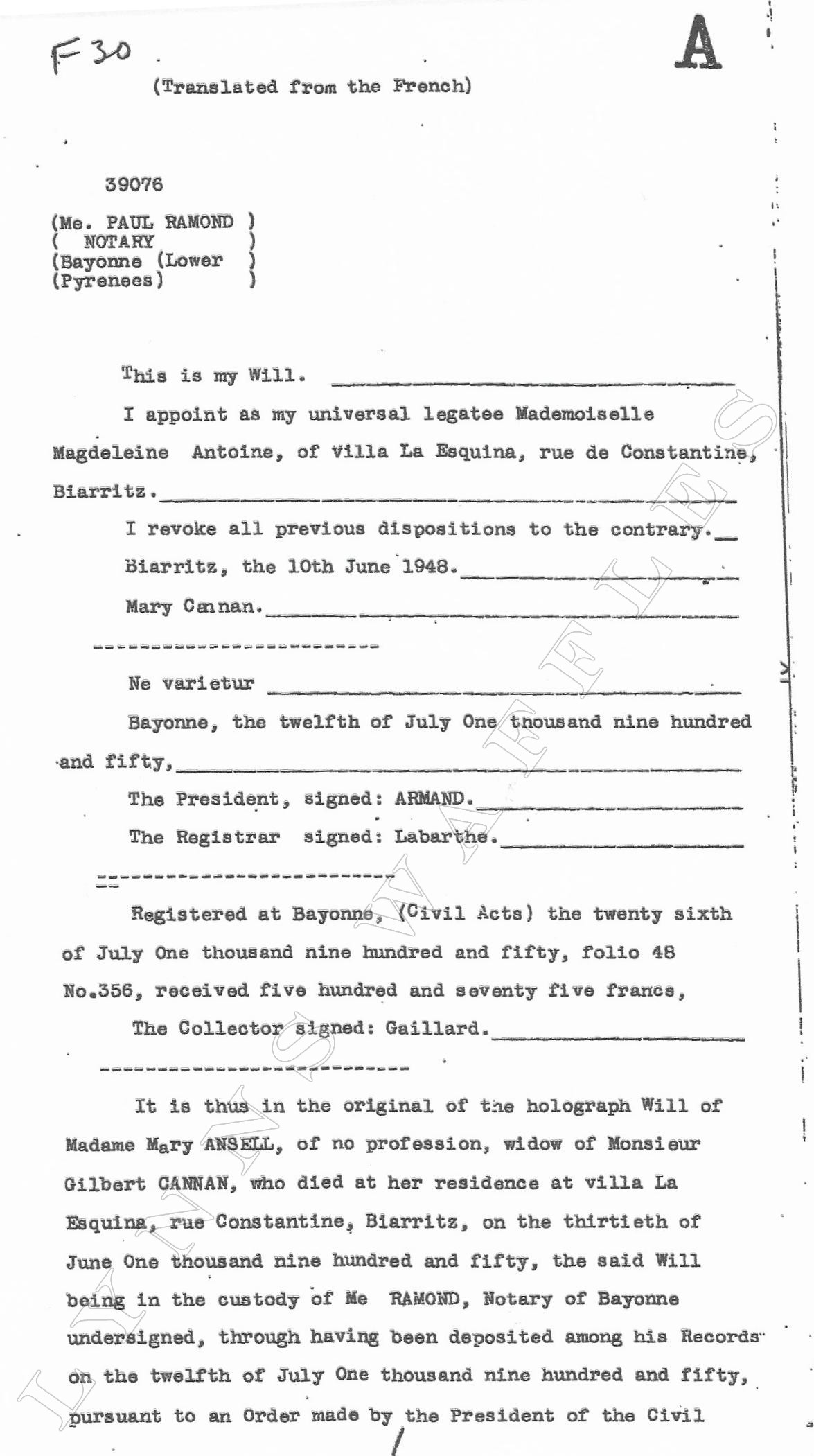 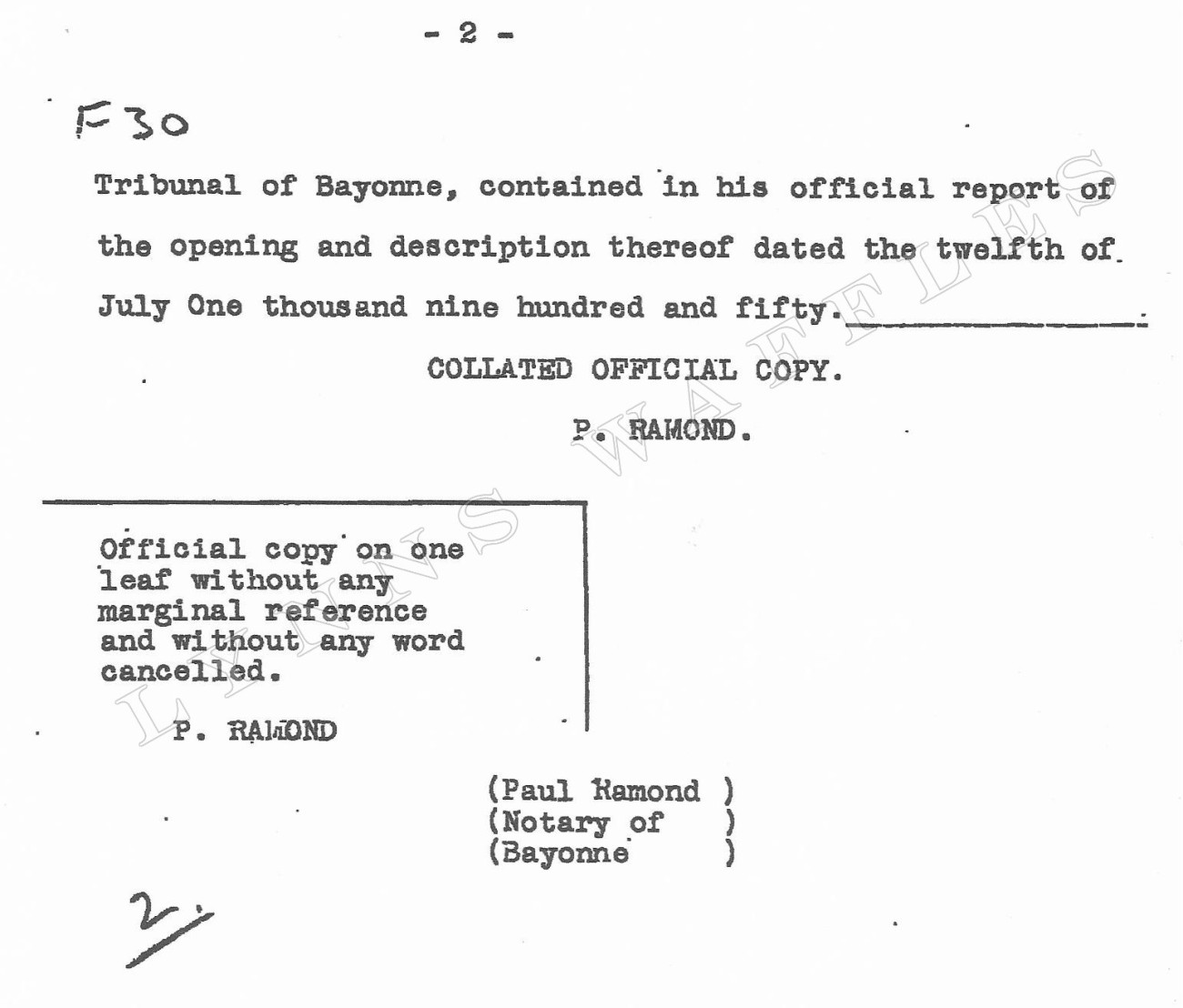 I am still fascinated by this family, especially Mary Ansell herself, my original Blog about her and her family was my longest of 2019 and took me months to research.

This Will of hers above does absolutely confirm that although Divorce proceedings were started as I found, between her and Gilbert Cannan, there was no conclusion and she remained married to him, he died after her in 1955, so if she hadn’t left a will her estate would have gone to him I presume.