Part One…
I came across this lovely book at a Car Boot sale (where else?)   ‘London Tells Her Story’ by Walter G. Bell. This book was first published in October 1938…… whatever would Walter think of London now I wonder? 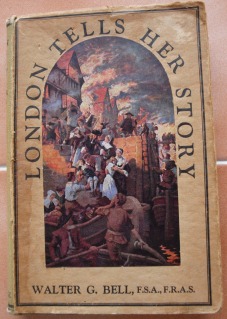 The last chapter in the Book is titled ‘The Last Hundred Years’ and because I just love the way its written and its content I thought I would just simply copy it out for you all to read, instead of just giving you snippets of interest, I hope you enjoy the read as much as I did………..

Let us glance back to 1837. A youthful Queen Victoria of eighteen, but three weeks enthroned, sat in Kensington Palace writing her diary:
Thursday, 13 July.-Got up at 8. At half past nine we breakfasted. It was the last time that I slept in this poor old Palace, as I go into Buckingham Palace to-day. Though I rejoice to go into BP for many reasons, it is not without feelings of regret that I shal bid adieu for ever(that is to say for ever as a dwelling) to this my birthplace, where I have been born and bred, and to which I am really attached. My present rooms upstairs are really very pleasant, comfortable and pretty, and, enfin, I like this poor old Palace…The poor rooms look so sad and deserted, everything being taken away. 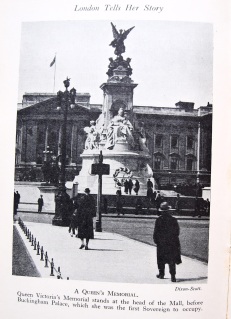 The Victorian age had begun. In front of Buckingham Palace, which she was the first sovereign to occupy, Victoria’s noble monument has been raised, the Queen in marble, seated, aged now. He would have been a gifted seer who should have pictured the capital when that long reign ended in 1901. The London whose slow enlargement we have followed through the centuries had grown about it a Greater London in the outer areas.

That London of the past had struck good, resounding blows for liberty–its own and the nation’s. Victoria came with a reformed parliament, long delayed, and set at last on the road to become really representative. Liberty henceforward would be in its safe keeping; the capital was free to direct its energies to the problems of its own growth, geographical, municipal and social, and that is the story to be told of the last hundred years.

The waterside aspect changed. Fire destroyed the old Houses of Parliament on the 10th October 1834. A foolish person stuffed full the stoves beneath the House of Lords with wooden tallies (these were notched sticks, cleft lengthwise, with which the Exchequer for centuries kept account of its borrowings). All went up in flames. It was a real loss, for St Stephen’s Chapel, where the commons sat, contained the shell of the original building by King Edward 111, in 1347, its roof timbered curiously wrought and painted. In the flames the Armada Tapestry perished, a priceless needlework which illustrated how the England of Elizabeth met and defeated the might of Spain. The borders contained portrait heads of several gallant officers who commanded in the English fleet. The fire cleared the ground for the long pile of the Parliament’s buildings that are so familiar at Westminster to-day, overlooking the river. 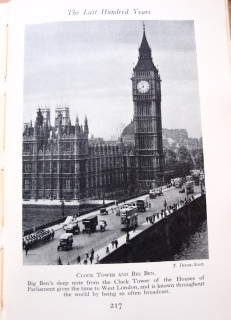 At Queen Victoria’s accession the built town covered no more than eleven square miles. Now, a century later, it requires 117 square miles to contain London’s houses as they spread out. (the area of the County of London,over which the London County Council has jurisdiction) A world of difference is there. No single factor will explain such remarkable expansion, but chief of all was Stephenson’s steam railway engine. The original “Rocket” you may see at the Science Museum at Kensington. In what was almost London’s first steam drawn train, new to the unscratched paint, the young Queen Victoria made the journey from Windsor to Paddington, and there was protest against risking that valuable life.

The towns did not like this new agent, not foreseeing the opart it would play. “This snorting, spluttering, hideous iron machine, belching forth steam and smoke” – did anyone in possession of his senses, asked a prophet of the day, really believe that it should displace man’s old and tried servant, the horse? London shared the dislike. So the Great Western’s iron road began, and does so still, at what was the hamlet of Paddington, far out.
The Southern Railway (using modern names) set out from Nine Elms, by Vauxhall; the station at Waterloo came later. The L.M.S. steam line stopped at Chalk Farm. Even today the London and North Eastern Railway is the only great system which has its terminus actually in a City , at Liverpool Street.
A cable railway for a time took coaches out from Euston to Chalk Farm. Along a copper wire laid beside its rails the first experiment with the electric telegraph was made, on the 28th July, 1837.
Actually the first steam railway from London, engine-hauled, was a short line opened in 1836, which ran to Deptford. It was thought necessary to lure passengers to accept the peril of a ride, and bands, the musicians picturesquely attired as Yeoman Warders of the Tower, played them into the coaches and away. At night the line was lit like a street with lamps.
Long ago, the Romans built their great roads all radiating from London. So, in the railway age, every main railway built in Britain starts from London. Note that not one railway passes through London or round it to the sea. Ravellers wishing to cross must fend for themselves.
The river, like the land, saw transport revolutionised. The Thames cannot claim to have floated the pioneer steamship; the little Comet of 1812, of three horse-power, made its vebture upon the Clyde. But two years later a tiny paddle-wheel steamer puffed its way about the Pool of London and the reaches below, drawing jeers and smiles from salt-water sailors who looked down from the tall sides of the sailing ships. Davy Jones’s Locker surely awaited it the first time THAT went into a real sea. From George Dodd’s fussy little paddle-steamer, with a ridiculous spider-like funnel, to the giant Queen Mary is a regular progression of steam development at sea.

London’s river problem grew with the ceaseless growth of the town. A time has been recalled when the little harbours of Billingsgate and Queen-hithe, mere dents in the Thames bank, sered the mediaeval city. That time went by, and to receive the goods brought by the ships, wharves and quays were built at the waterside. London’s populace at length came to be outnumbered by millions. Long lines of wet docks, for the landing and storing of the world’s trade, were delved in the last hundred years. They extend chiefly upon the north bank of the Thames to Tilbury. The Port of London Authority now controls them all.

A town cannot stand still. It must grow or it declines. London has not declined, and at every point, north, south-especially south-east and west, each year houses have been pushed farther out into what were fields. South London was really cut off while Old London Bridge gave the only footway over the river; it awaited the bridge-builders of the Four Georges to make it accessible. Hamlets and villages entire have been incorporated into the monster city, to become a cause of distracting confusion in London’s government. But when all is considered, the outstanding achievement of the last hundred years is found in communications.

Until a century ago, the fastest speed ever attained by man was that of the jockey on a racehorse. The fast stage-coaches on the improved roads were known in places to make a furious eleven miles an hour-little to-day to a cyclist.
Note: A plane has flown from Edinburgh to London in 48 minutes, at 408 miles an hour and a Motor-car has travelled at a speed of 345 miles an hour for one mile. A creditable average pace for travel was eight and a half miles an hour.

The George Inn, now owned by the National Trust

The railways drove the traffic off the roads by the middle of the nineteenth century. London lost its coaching inns, picturesque, homely places, the ostler the first person to be accosted-the steaming yards smelling pleasantly of horses. One after another they were sent out of business. A last relic of the old galleried inns of London survives to be visited, namely the George in the borough. The purely drinking public-house, less desirable, sprang up everywhere. Now the motor-car has brought back traffic on the roads. All day and night the signal lights glow red, amber and green. Never have London’s highways been so crowded as to-day, never have they presented the authorities with so many problems awaiting solution, of speed, and life and time.