Yesterday I put these three wonderful old photos on Twitter as a Sunday Puzzle, all three, larger than Cabinet Card photos were taken in Montreal, Canada. I wasn’t totally sure of the writing and hadn’t done any research at all on them. I found them last month in a box on the floor at an outside stall at the Giant Fleamarket at Shepton Mallett, they are not in the best of condition but definitely deserved to be saved, they were all damp too, now they have dried out beautifully, nice and flat. 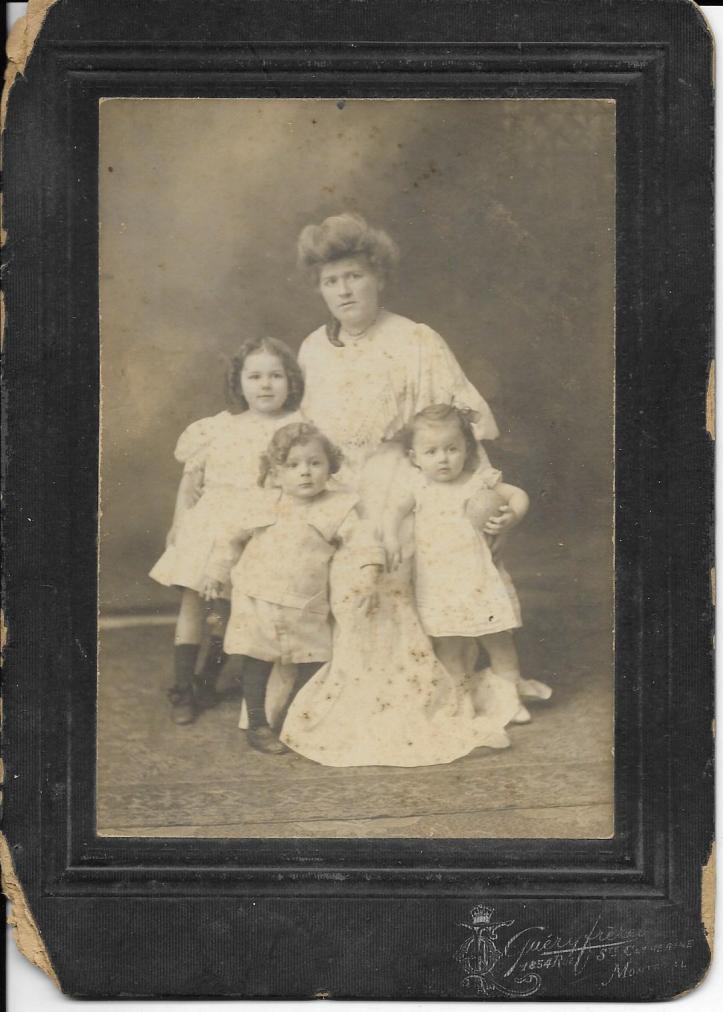 This photo is gorgeous with Mum and three of her children, I now know to be Mary Rose Lena b 2 Jan 1900 she’s the tallest child by her Mums shoulder, then on the other side the little girl holding the ball is Catherine Evelyn b 9 Mar 1901, then front left is Thomas William Jnr b 5 May 1903. There was a gap of over 3 years to their last child Violet Albertine Margaret, not in the photo above, but mentioned on the back, she was b 31 Aug 1906.

This second photo below is Mary on the left and Catherine (Katie) on the right standing.

So yesterday all my lovely followers on Twitter came up trumps, they were all amazing, so huge thanks to all who joined in! I especially have to thank Paula at @shakingbranches (Twitter) Paula lives in Lanarkshire, Scotland, she was the first to identify the family and find them in the census records in Canada, others on Twitter also lending a hand during the afternoon and evening confirming these names with the family. Here’s Paula’s blog online: Shaking The Branches She’s researching and searching for her Scots & Irish Ancestors, which is rather strange as this family has links to both areas!

So now I had the family group then this morning I was able to fill in some more details and more family members, It’s not a totally happy tale to tell of the family.

We’ll start with Father of the children above Thomas William Bannerman Snr, he was born in Quebec, Canada, his Father Robert Bannerman was from Scotland and his Mother Mary Rose (Gilboy) was Irish. Thomas William married Euline (known as Evelyn) Melonie Lapiesse Dit Masurette at the beginning of 1899 in Montreal. Her parents are both of French descent, Father Antonie Lapiesse and Mother Orelie.

The couple had four children:

Thirdly a Boy, Thomas William Jnr born May 1903, I hadn’t confirmed a marriage for him, but then I looked carefully at the link for the Bannerman Family memorial on Find A Grave and hooray, I found him and his wife’s details. His dates on the memorial are 1903-1973 and it says his wife Anna Kathleen Howard 1905-1989. I also have a possible link to a couple of passenger records with him visiting Scotland a couple of times, but obviously, these would need to be confirmed.

There are many family members on the memorial at Cimetière Notre-Dame-des-Neiges, Montreal, Quebec, H3V 1E7 Canada, see these photos from Find A Grave: 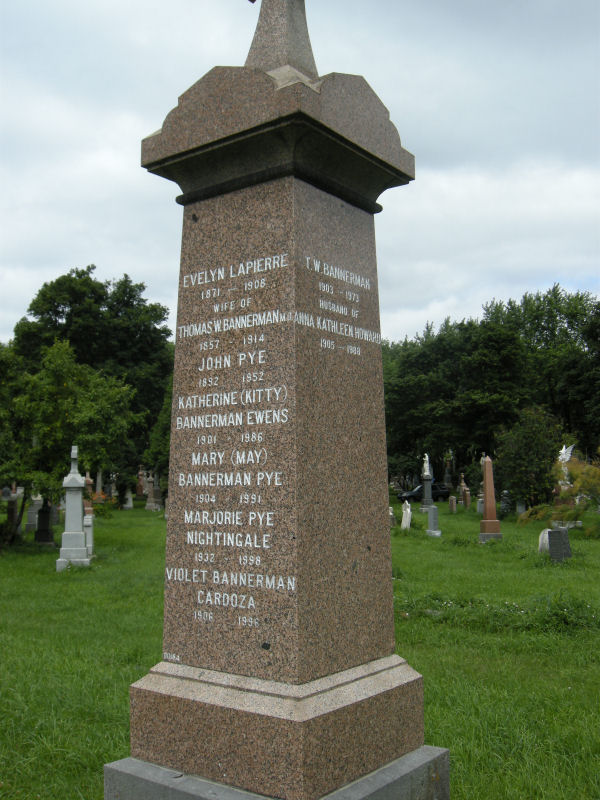 Fourth child is Violet Albertine Margaret 31 Aug 1906-2 Dec 1996 in Dade, florida. She married Cecil Carlos Cardoza on the 28 Aug 1933, they had a daughter Carmen Carole in 1934, Carmen died in 2014. Carmen married Donald McLean in 1955, they had children too. These super photos below are from a Public tree on Ancestry of Violet, Cecil and Carmen.

These four lovely children sadly lost their Mum in 1908, Violet was just two years old, their Dad Thomas never remarried, he was a Doctor/Physician. In the 1911 census of Canada, it was just Dad and the four children present in the household. Then tragedy struck again in 1914 when Dad Thomas died, here’s the record of his death, can anyone translate what it says for me please?

After being orphaned the four children were taken in by their Godparents Joseph and Mary Ann Valliant, their Uncle and Aunt, Mary Ann was Dad Thomas’s sister and it seems the family had always been close, even living very close by each other.

This is the last old photo I found, isn’t it just beautiful, no writing on the back of this one sadly. I wonder if this is Violet or maybe Thomas William a little older than the first photo? What do you think? 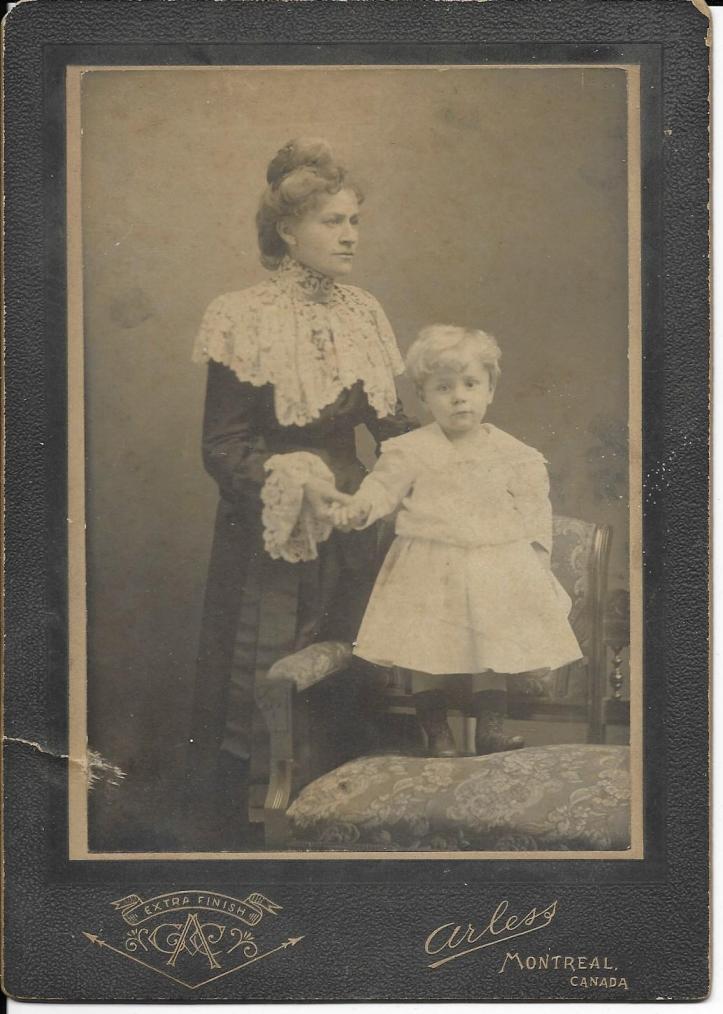 So we have completed some of this family’s history, here’s their small Public family tree I have compiled on Ancestry: Bannerman Family Tree  here’s a quick screenshot,

and now I hope that by publishing this Blog about them these gorgeous photos might get spotted by a descendant who wants to give them a new home, wouldn’t that just be fantastic! Thanks again, everyone.