UPDATE June 2019 from Hugh Drake: “I have just picked up a link to your page about the Drake Family of East Coker. A few of the details are new to me but the relationships are correct as it was my father who put all the family tree in good order-he went back as far as he could before he ran into the fact that ancient Church records were stored for safe-keeping in Exeter Cathedral which was badly bombed in 1939-45 War. Donald Drake the last surviving son of Felix and Edith was my Grandfather and I knew both Great Uncles Jack and Bernard and Cecil all of whom lived at some time in Devonshire Cottage. This was built by great Uncle Jack and is made from Ham Hill Stone in the 1930’s, using no doubt his skills sharpened by his involvement in the building of New Delhi under Lutyens. It is all a very well documented history and I would love to have copies of the correspondence that you have of the Drake Family. I seem to be the family archivist now! Sadly the last of the Drakes died in the early part of this century-Sheila, Betty and Francis, children of Cecil and Joan, all of whom along with many other Drakes including my father and mother and an uncle who died at Blundells School in Tiverton are buried in the extension Churchyard in East Coker. Betty was a very generous supporter of East Coker Church. Many old letters are held here as the family archive. Best wishes and keep looking! Hugh Drake.”

So lovely to hear from Hugh about the family, have now sent him copies of all the letters I bought that day, just in case any others relate to his family.

Original Blog : On a stall for sale at the end of last year, I saw displayed in a cellophane sleeve an old letter, while I was looking & trying to read it the seller said ‘If you’re interested I have some more of those’ So I ended up buying all six letters for £1 each. This is the first three… 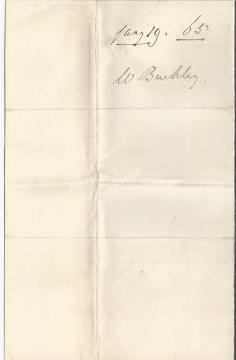 ‘Pall Mall, London SW. Dear Ralph Leaders? If matters … get in a sufficiently forward state for you to expect an opinion it would be a past? convenience to me to learn about what time the Executors will be able to pay the legacies under my fathers will. An answer on return of post to me at the Gt Western Hotel, Paddington will catch me in Saturday morning before I have London. Please excuse this trouble that I am giving you & …. me…. Yours faithfully W. Buckley.’

Number two….There are such a lot of words I cannot decipher ! But getting the gist, it is to assure Mr Felix Drake’s security with documents, I am unable to read signature either..It may relate to this 3rd letter below, as the dates are very close…These letters are to/from a solicitors it seems, the language of the law & how they wrote is not something I’m too familiar with, which makes it hard even to guess at some words ! 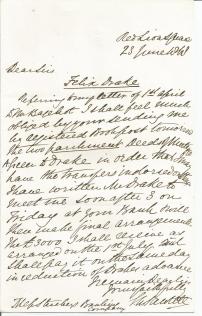 ‘Page 1….Red Lion Square.23 June 1867.  Dear Sirs.   Felix Drake…Referring to my letter of the 1st April*********** I shall feel much obliged by your sending me by registered book post tomorrow the two parchment deeds of mortgage A.Green to Drake in order that I may have the ******* indorsed on them. I have written Mr Drake to meet me soon after 3 on Friday at *** Bank & will then make final arrangements. The £3000 I shall receive as arranged on the 1st July **** shall pay it on the sameday in reduction of Drakes adoeuee? ********** Deaclieu Yours Faithfully WFH Sawtree’

If I understand this correctly Mr Felix Drake has lent Mr Arthur Green £3000 and Mr Arthur Green has used his properties etc at Holcombe as security for the loan (Probably the Brewery? etc)

I shall start with Felix Drake, what a great name ! He was born on January 13th 1845 & baptized with two of his brothers on 29 April 1846 at Christ Church, St Marylebone, Westminster, London. 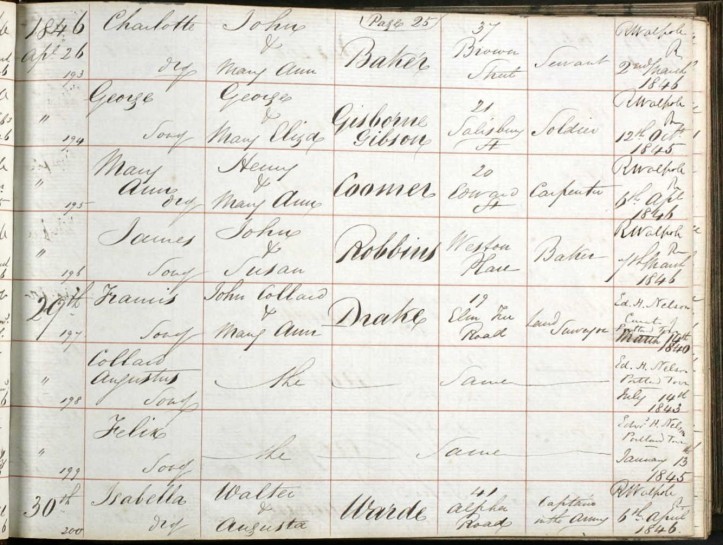 His parents were John Collard Drake (b1801 Charmouth,Dorset) & Mary Ann Green(b c1810, Holcombe, Somerset) who had married on 23 Apr 1835 in Holcombe, Somerset, where Mary Ann was born.  ( So when I found this marriage on Find My Past I thought ah ha I bet Mary Ann Green is related in some way to Mr Arthur Green ?? I wonder ?) On the marriage details the Groom’s Parish was listed as Basingstoke, Hampshire.

In the 1861 C Felix was at age 16 a boarder at Grammar School at Herongate Rd, Brentwood, Essex. In the 1871C it was a job to find Felix on Ancestry, so once again I went to Find My Past & found him easily with new wife Edith (Lloyd) They had married on the 23 June 1870 at St Mary de Lode, Gloucester (‘The word Lode is derived from an old English word meaning a water course or ferry. In this case it refers to a ferry that once crossed the river. At the time of building, there was a branch of the river to the west of the church, which no longer exists’ info from Church of England)

To find them on Ancestry, assuming Drake had been misspelt, I put in details of servant Caroline Halsom & found them ! He was wrongly transcribed as Filex Darke, so have now corrected on site:) He was now a Manufacturer of Hair/Cloth Webbing.

I found this info on  Visitor Info Yeovil History   a little information concerning Felix Drake’s company…‘Three mills operated from the same stream at Holywell (Hew Hill), East Coker Mill and Paviott’s Mill. Flax was grown in many areas until the late 1800s. Nearly every cottage had its looms for the weaving of Coker cloth. The Twine and Webbing Mills were founded by Mr Felix Drake in 1872 using local skills and continued for over 100 years. Ropes and webbing from Messrs Drake & Co were used in the ascent of Mt Everest by Sir Edmund Hillary and also to lower Sir Winston Churchill’s coffin at his interment.’ The site has great Visitor info for lots places.

Felix Drake himself died in Jan 1914 in Yeovil, Somerset. His wife Edith had died previously, on 13 March 1888, their youngest child Donald being just a few months old, very sad with all her children being so young. The family only had two servants in the 1891C so I am assuming the older children helped to look after the younger ones 🙂

In the 1901C the children that were still living at home were very well occupied 🙂 Two of them working in their fathers company….

I wrote on blog below, when I published this a week ago ! I was talking about East Coker & where the Drake family lived…So on Sunday after the car boot sale at Yeovil, we went & had a wander round East Coker & found Devonshire Cottage..Was very tempted to go in drive & knock the door !! But I didn’t ! It’s rather a large place & worth over a £1,000,000 now..Is it the original though?..The outbuildings seem to be (Top Pic) but honestly not sure of the house (bottom left) Side & back of outbuildings (bottom middle) Also as we were coming out of the village, we noticed this (bottom right) Drakes Meadow..newer houses..Wonder if its named after the Drake family?? Does anyone know? 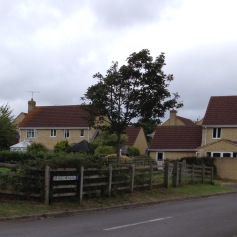 This is Felix Drake’s will below……..

On the 21 November 1888 this was reported in the press throughout the Country.. Mr Arthur Green, Proprietor of Holcombe Brewery in Somerset has filed for Bankruptcy in Bristol Bankruptcy Court. Gross liabilities are over £47,000 and the deficiency is over £9,000. A falling off in trade & working with reduced capital were given as the reasons. On 14 December 1888.  Official Receiver said that it had been decided the creditors that this case should removed to Bristol for convenience, and he made a formal application to that effect. 1 February 1889. At the Bristol County Court, on Friday, the following case came before the Registrar. Mr Arthur Green, Holcombe Brewery, Holcombe. Somerset. —Mr. Dunn, Frome, appeared for creditors to the amount of £18,000…etc….There are lots of articles in the papers, but this one below sums it up really…The Holcombe Brewery was lost to the Green family…

I have found these articles written about the Brewery...’One more brewery entered the Wells market in 1862 when Arthur Green, common brewer of Holcombe, leased the Christopher or New Inn, 35 High Street, from the Vicars Choral. Arthur was a member of the family firm John Ashman Green and Brothers that operated the Holcombe Brewery. Earlier, in the 1840s they had operated as Emanuel Green and Sons but this had been updated by 1859. In 1888 Holcombe Brewery Ltd had been registered. It did not last long after this, it went into liquidation & was purchased in 1893 George Henry Thatcher, the owner of the North Brewery, Welton.’ Most of this Info found on Google Books..The Brewing Industry, A guide to Historical Records.

This next info written by Tony Scrace in THE RISE AND FALL OF THE BREWING INDUSTRY IN THE WELLS AREA: 18TH–20TH CENTURY  ‘In 1901 Thatcher’s took over Welton Old Brewery. The company name changed to Welton Breweries Ltd and the Holcombe operation was closed’

By the time of the 1891C Arthur Green & his family had moved to the Bath area..Living on own means.Looking for a job ?

Then in the 1901C they have moved to Wales …..I am unable to read totally clearly, but it seems Arthur is working as, or for a Magistrate for a Somerset Accountant? & his wife is a Manageress of a Steam Laundry…So they are trying to get back on their feet..

Then the 1911C they are back living in Bath at 3 Clarendon Villas, Widcombe Hill & obviously a bit better financially now, as Edith is not working, they just have one daughter at home who is working in Nursing & Arthur is an examiner of County Records.

Below is a Google image from Brewery Lane, Holcombe of Holcombe Brewery that was..the large building & the ones behind..

The Brewery looks very swish now its all residential dwellings 🙂

This is a link to a superb blog by Brian Tomkins about his ancestors stories, this one is the story about Emmanuel Green b abt 1761 & the beginning of Holcombe Brewery, he was Arthur Green’s Grandfather.. Holcombe Brewery beginnings & family

Holcombe Brewery & village also has another claim to fame ! There is a memorial to Robert Falcon Scott – Scott of the Antarctic ! Scott’s father worked for a very short time as manager of the Holcombe Brewery after Arthur Green’s time. This is an excellent write up of their time in Holcombe by RadstockJeff on a forum that I found, with pictures too 🙂   Click on link… ! Robert Falcon Scott info..Holcombe

If either of these two families are your ancestors, there is so much information about them online it is overwhelming ! Once again I could have written a book ! Below are some snapshots of pages of Kelly’s & other Directories as examples for you to see……………….    If you have never looked through them, then do! They have so much local information, not just businesses, but local residents of villages, lots of info about the Churches in the village, memorials & repairs etc. They are invaluable if you are building up a picture of where your ancestors lived & worked. These below are concerning the Drake family, several mentions & the villages they lived…

Thanks so much to David Walsh @DW_Walsh  or @fh_data_project and his comment..see below, I now have a bit more info about the beginning of Holcombe Brewery and the Green Family, love the elopement !!!!… See scanned page below..