This amazing and wonderful old photo we found just after moving to Beaminster, in a fabulous old antique shop down near the coast, it was mostly full of ‘junk’ but I love places like that, lots of dirt and dust, stuff all piled up, such a treasure trove !! You just never know what you’ll find…and this is certainly a treasure, and rather a strange coincidence as we are wandering about in Yorkshire at the moment in our Motorhome…and the family in this photo all come from Yorkshire.
This is about the best picture of it that I can take, its in a large frame 19″ x 16″ glass front, and unable to be taken apart without damage, the back has been fixed with wooden slats under the outside cover, and its just not worth taking the risk of spoiling it….

What a difference it makes to look at an old photo, and know who you are looking at !
Well done that person from the past that decided to write the family name down, and bonus the date and occasion !!

William Henry Eagland was born to parents Thomas Eagland and Sarah Hargrave, he had an older brother baptized James Charles, born 16th March 1830, known as Charles I think, listed in some records as Charles (Census)    Baptism record…see below…

Sadly I found Edwin Hargrave Eagland’s burial record on Find My Past, 5th January 1835, at Woodhouse, St Mark, Anglican church…..he was just over a year old….
Thomas and Sarah had married in 1828 in Leeds, Thomas was an instrument maker (Surgical) as his father James Burton Eagland was before him…
see their Marriage details below….

In the 1841 census I was puzzled because I found Thomas and Sarah 30 miles away from their children in Rawmarsh, their two boys Charles aged 11 and William aged 9 were in Leeds.
I can’t read what was written on the census (of the parents) ! It says Surgical on second row, but ??? ….they must have been selling their wares..their Surgical instruments, I think..

Then sadly I found James Charles had died right at the end of 1847, aged just 16..William
must have missed him greatly…He was buried on 31st Dec. I wonder what he died of?

An excellent description of the area in Leeds where the family lived
( With thanks to Pam Smith for help with area info). …see below…

In the 1851 census the family were living together, young William Henry was now a medical student, with Sarah, and father Thomas was a Surgeons Instrument Maker, employing 5 men and 2 women. Living at 54 Woodhouse Lane, Leeds and now with one servant !
Things were looking up for them !

This is a Victorian picture of the area on the front of this 1908 Map, with Springfield Place and Woodhouse area shown on map below, quite highly populated.
( thanks again to Pam Smith for Local info).

By the time of the 1861 census, William Henry had married Sarah Anne Firth on August 19th 1858.  Without certificates I cannot be sure of Sarah Anne’s family, although we know she was born around 1839/40 there are several possibilities unfortunately…
William had passed his exams and qualified in October 1855 before he married.

I found several references to William Henry Eagland in the newpapers of the day, this reference above (1860) was one just a couple of years after he had qualified.
William and Sarah were living at 4 Queens Villas, in the 1861 census, with their first two children Henry Firth Eagland 1 year old, and Mary Blanche Eagland 4 mths……………..

And Williams parents seemed to continue to do well, as in the 1861 census they had moved to Headingley still employing six people and with two servants.
The 1871 census I was only able to find at Find My Past at first, not on Ancestry, and after searching with details from FMP, I found there was an error in spelling the surname..it had been transcribed ENGLAND not EAGLAND.

So we find William and Sarah and they had five more children now Henry Firth, Florence, Lucy, Francis W (Baptized William Francis) Virginia M, Elizabeth M, but Mary Blanche is missing ? also there is a Governess and three servants. After searching I found what I had feared Mary Blanche burial record in 1863, she was just 2 year and 7 months old…

Father William Henry is listed as a Ironmaster?? not a medical Doctor? It seems likely an error? or did he also own or manage a foundry?
In the 1881 census William Henry occupation is listed as ‘M.D.M.R.S. Not Practising St Andrews Eng L S A’  I am wondering if he was teaching, Does LSA stand for London School A?…MD is Doctor of Medicine…what is MRS ???…or LSA could be Licentiate of the Society of Apothecaries ? more likely..teaching medicine…See Census below…..

The family here are living at ‘Bankfield’ next door to the Parsonage, where Edwin Spencer Gough was living, who was the Vicar of Burley.
Their children Henry, Florence and Lucy were the only children still living at home at this time.
In 1891 William Henry was a practising MD, Doctor of Medicine, but also again, as in 1871 listed as an Ironmaster ?? I have searched every angle I can think of to try and explain this, thinking its obviously not a mistake, but still puzzling…See below….

Hooray ! I Finally I found a reference in the newspaper archives on Find My Past !!!
…. See below….This explains everything !

But being an Ironmaster was not all plain sailing because I found this Newspaper report from back to early in 1871 shows…..see below…

In the census of 1891 their children Lucy, Elizabeth and Florence are at home, with Daughter Florence’s husband Benedict Francis Cramer, who she married in 1886, and their daughter Gladys Florence b 12 September 1887 too.
Benedict, who was born in St Petersburg, Russia on 17th May 1849, had previously been married to Nina Borradaile, and had a son Frank Benedict (b1878.d1958) and daughter Ethel Nina (b1880.d1970)(married to HF Montgomery)
His wife Nina had died on 28 January 1885, they lived in Kensington, London.
These first two children were down in Exeter in 1891 census, being cared for by an aunt and uncle, who was a surgeon.
Daughter Florence’s husband Benedict was living in London in the 1901 census, a boarder, not long after on 28 July 1901 I found a death record for him in London. Florence remarried again to a John Mears Troughton in 1905. Florence Troughton/Cramer/Eagland died in 1912.
Daughter Lucy married Edwin Arthur Barraclough on 7th July 1891.

But what I found next was shocking……but very interesting !
A nasty Divorce, which I’m sure created some scandal at the time !
There were numerous reports in Newspapers across the country reporting this case, maybe it was because he was a Vicar !

These are just three of the pages that can be viewed online, there are lots more, but you can get the jist of the Divorce from these……… 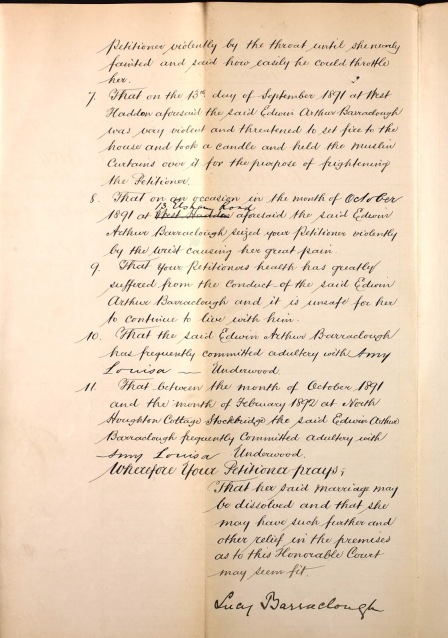 What a nasty horrible man it seems Mr Barraclough was !!!!
Thankfully for them, I didn’t find any children born to this couple…….
Lucy’s story does have a happier ending though, as I found she married a Gerald Heaton in 1899 in Kensington, London…They had two children Estelle born 18 June 1900 and Gerald Lovel born April 1902…Here they are in the 1911 census…. 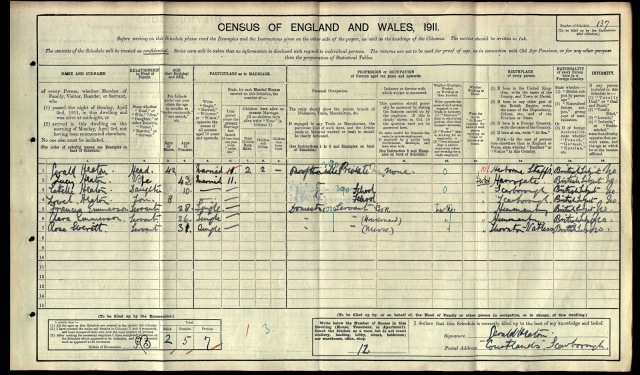 The family did a bit of travelling, as I found several references to them on the Passenger lists..and I found the answer why when I saw Father Gerald’s Will…
His son Gerald Lovel was a Tea Planter !

This record above says that their permanent address was Ceylon..

Port of arrival here is Southampton, I think they had two homes, here in UK and Ceylon, as a London address is shown on the records too.
This is Gerald Heaton’s Will …see below..

William Henry and Sarah Anne’s son Henry Firth had gone over to Chicago, Illinois before this census in 1891, as I found him in the  Chicago, Illinois, City Directory, 1887 on Ancestry. He was working as a saleman, even though he was a civil engineer (1871 census)

Sadly the next record of son Henry Firth is his death in Canada…… Henry Firth Eagland died on 13 August 1896 is buried in Saint Johns Anglican Cathedral Cemetery, Winnipeg, Greater Winnipeg, Manitoba, Canada…I don’t know the cause of death…
Next we come to son William Francis, sometimes found as Francis William, he was born in the first half of 1867. He married Gertrude Marie Hutchings in 1894 in Strand, London. They had a son Francis William born in 1894 who tragically died in 1909, just a year after this photo was taken………William Francis died in 1927 In Epsom, Surrey, he was a Publisher and left a huge sum in his will to widow Gertrude, probably the equivalent today of millions of pounds…………

Now the couple’s last born, a daughter Elizabeth Maud Eagland, born 10th November 1870, married Martin James Richardson (B1867) They had three children that I have found. Martin Norman born 1894, Dorothy Jenny born 1896 and Evelyn JVH born 1891.
But there may be more………
Sarah Anne died in 1910, just two years after this picture was taken..

I found this image below of William Henry and Sarah Anne’s grave in St John the Baptist burial ground, Adel, Yorkshire on Gravestone Resources Photographs, image is just a thumbnail and too small to read, I sent a message and asked for an original copy over two weeks ago, but have heard nothing back. (I will try and find a better image if I can)
I’m not sure if the website is still being checked, shame…Because you go to the link via Ancestry, so not good news for them either.
Wish it had been on Find A Grave !!

This wonderful framed picture, and this family have had me totally hooked, at every turn I have found more and more information..enough to write a book about all the twists and turns, happy times, tragedies and scandal !!
Who’s who do you think ?? I have my thoughts, there are over twenty close family, and sixteen in this picture….
Hope you have enjoyed the read and I haven’t made this blog too long..
but sometimes I just can’t stop …..ha ha
Are you a direct descendant of this Eagland family..if so I would love to return this where it belongs, to be handed down through generations……….